For The First Time, Oprah Isn't On The Cover Of "O Magazine" — Here’s Why 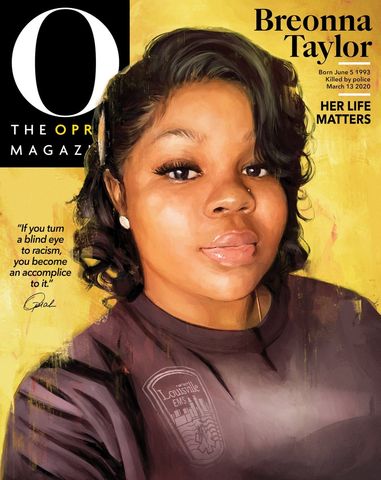 Oprah Winfrey is one of the biggest names in the entertainment industry, and it’s impossible to think of her magazine without thinking of her face on the cover. Every issue of O Magazine has featured Oprah as the cover star — that is, every issue until the magazine’s latest. In the newest (and historic) cover, Oprah gave up her spot in order to honor Breonna Taylor.

Taylor was a 26-year-old EMT who was shot eight times and killed by police after they came to her house with a no-knock warrant. As of several months after her death, the officers Myles Cosgrove, Jonathan Mattingly, and Brett Hankinson have yet to be arrested, and only one of the three officers involved has been fired.

People have been calling for justice over Taylor’s death over the months with her name and image being one of the pillars of the Black Lives Matter movement. Oprah wrote an article that will appear in the magazine’s September issue, affirming their support for the movement and Breonna Taylor in particular.

At the beginning of the article, the magazine asks its readers to sign the Change.org and Colors of Change petitions calling for justice for Breonna Taylor, call Kentucky officials to demand justice, donate to the Louisville Community Bail Fund, and #SayHerName on social media so that no one forgets her. Oprah continues to write about her conversations with Taylor’s mother, Tamika Palmer, and how Palmer is dealing with the grief of losing her daughter. Oprah touches upon the fact that Breonna Taylor was just like all of us: she loved cars, she loved hot sauce, and she had plans for her future. Plans that will unfortunately never come to fruition because of the senseless recklessness of the three officers and the Louisville Metro Police Department.

At the end of the article, Oprah writes, “What I know for sure: We can’t be silent. We have to use whatever megaphone we have to cry for justice. And that is why Breonna Taylor is on the cover of O Magazine. I cry for justice in her name.”