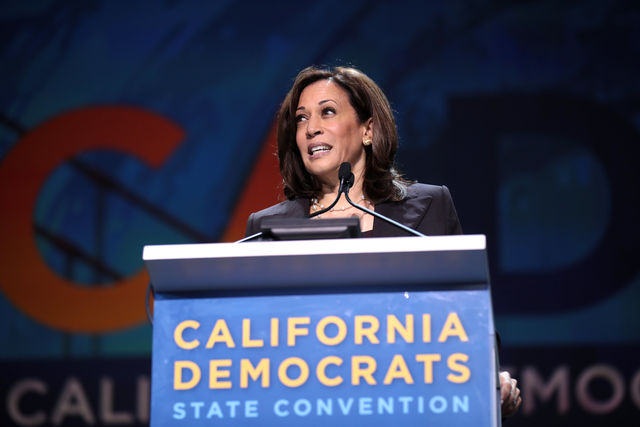 California Senator Kamala Harris has long been talked about as one of the frontrunners for Joe Biden’s Vice President pick. Other notable contenders include Senator Elizabeth Warren, Senator Tammy Duckworth, Susan Rice, Stacey Abrams, and more. The picks have been discussed a lot, as Biden still hasn’t made his decision on who his running mate will be, but some supporters strongly feel it shouldn't be Harris — and their reasons are suspect, to say the least.

According to Politico, Chris Dodd, one particular Biden ally who is helping him vet VP picks, felt like Harris’s “ambush” of Biden during the debates was a cheap gimmick, and was stunned when Harris laughed it off and had no remorse. Dodd is allegedly starting to push California Representative Karen Bass instead of Harris.

Of this news, conservative commentator Ana Navarro commented that Dodd is the “embodiment of white establishment” and suggested that he wasn’t the best person to vet the group of women that are potential VP picks for Biden.

Why the hell would ⁦@JoeBiden⁩ put Chris Dodd - a 76 year-old lobbyist and embodiment of white establishment, who while in Congress had quite the scandalous reputation- in charge of vetting and leaking about a group of incredibly talented women??? https://t.co/TtUNN1vI7x

Since that news has broke, we have seen a shadow campaign of Biden allies trying to stop Harris from being picked as well. According to a CNBC article, some argue that she is just “too ambitious,” a phrase that is not new to women. Despite ambition being a positive thing for men, it seems to be a negative one for women. Ambition is not something that should be seen as a negative, and it exposes the sexist tropes that these Biden allies are using to squash Senator Harris’s chances of becoming Vice President.

The fact that Kamala Harris won’t apologize for criticizing Biden should not be seen as a weakness. In fact, it should be seen as a strength of Harris’s that she was able to criticize Biden and stand by her word. While some might think that the way Harris went about the debate was a little prepackaged, as The Hill's Rising with Krystal & Saagar discussed on their show, it should not cost her the role. It could be argued that it shows a weakness in Biden’s allies who cannot reconcile with the fact that Harris criticized the former Vice President. As Krystal Ball noted, Senator Harris’s “attack” on Joe Biden was one of the strongest moments of her campaign, and Saagar Enjeti commented that it was “a weak complaint” and that “she should have no remorse, it’s a competitive primary.”

Harris certainly isn’t the only one who has been getting this treatment among the VP contenders. The conservative news site the Washington Examiner took aim at Stacey Abrams, writing an op-ed saying that she “feels entitled to power, which is why she shouldn't get it.” When women ask for power that they deserve, it somehow comes off as entitlement to men who will feel threatened by their power.

What do all these stories have in common? pic.twitter.com/coWlsv8253

There have certainly been attacks on Biden from men as well as Harris, but we rarely see them attacked for this reason. Before endorsing Biden, Senator Bernie Sanders made several criticisms of the former Vice President, and while some Biden supporters might have disagreed with him, he was never personally criticized, and his complaints weren't viewed as a "gimmick." And as Karen Tumulty pointed out, if “Biden were to tap Harris, he would hardly be the first to turn to a rival who had scuffed him up in a primary.”

This double standard doesn’t just exist in politics — it exists everywhere. When women, especially women of color, demand the power they deserve, they're seen as overly ambitious, calculated, and entitled, while men are depicted as smart, powerful, and confident. As Helaine Olen explored in her opinion piece for the Washington Post, the problem of apologizing for things where you weren’t necessarily at fault isn’t something new for women and they often end up in “something of a ‘damned if you do, damned if you don’t’ position. Apologize for your ambitions, and you are untrustworthy because you are hiding your true self. But acknowledge them openly, and you are untrustworthy because you don’t take others into account.”