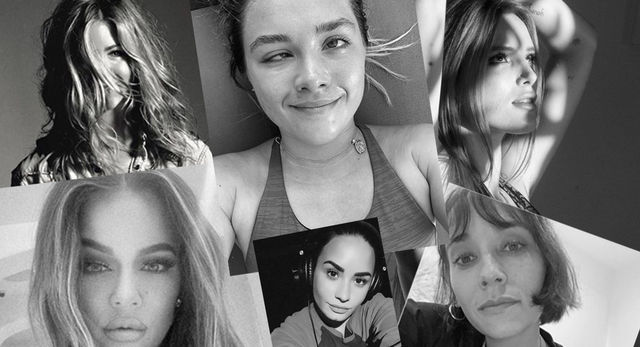 Over the past week, you might have seen a ton of women posting black and white Instagram photos with the hashtags #ChallengeAccepted and #WomenSupportingWomen. The viral campaign is a way for women to show off their support for one another. In a landscape that has traditionally pitted women against each other, this is meant to break the stigma that women cannot be supportive of other women.

Many celebrities have taken part in this challenge, including Khloe Kardashian, Bella Thorne, and Demi Lovato, among countless others. Right now, the #ChallengeAccepted hashtag on Instagram has over 6 million posts and the #WomenSupportingWomen hashtag has over 8 million, and it's still growing at a rapid rate. It’s safe to say that this trend definitely went viral over this past week.

? Challenge Accepted ? @vanessabryant and @malika thank you for choosing me for this! To all my Queens- Let’s spread love and remember to be a little kinder to one another ? #womensupportingwomen

Challenge accepted. #womenempowerment #womensupportingwomen Cheers to the many faces of women who have shaped our understanding of what it means being a woman. @kellyosbourne @margosha777

The trend has caused some backlash, mainly because some see it as shallow to post a black and white photo of yourself with some hashtags, and it’s not really "doing anything" to support women. It’s worth noting that some people are saying that the trend started out as awareness for the problem of murdered women in Turkey, but Instagram confirmed this seemed not to be the case.

Taylor Lorenz, a reporter for the New York Times, tweeted out an article she wrote stating, “People love these types of “challenges” because they don’t require any actual advocacy. You can self promote in the name of a cause, but the cause in these #ChallengeAccepted posts is so vague they basically don't support anything at all.”

People love these types of “challenges” because they don’t require any actual advocacy. You can self promote in the name of a cause, but the cause in these #ChallengeAccepted posts is so vague they basically don't support anything at all https://t.co/MfUVFh1bjd

While people in the comments seem to be supportive of the celebrities posting the photos, many people have gone to Twitter to talk about why they think that the #ChallengeAccepted trend isn’t helping anyone. Instagram is no stranger to trends like these — ones that start off with good intentions but ultimately come across as hollow and self-aggrandizing. We’ve seen it pretty recently in the wake of George Floyd’s death, with the rise of people posting black squares which also comes off as a meaningless statement when not followed through with any action or real advocacy.

I am a huge believer in women supporting women — obviously! — but I don’t understand this “challenge” at all. How is it empowering to other women to post a selfie? Would it not make more sense to post snaps of other woman who empower us? https://t.co/IHn8sguRi2

Having vague hashtags like #ChallengeAccepted and #WomenSupportingWomen isn’t actually helping a cause, it’s promoting a selfie. There are so many causes to promote nowadays, like Black Lives Matter and the new challenges Dreamers face under the Trump administration, but posting a beautiful selfie of yourself with a black and white photo isn’t doing much.

#challengeaccepted, @uzoaduba! Thank you to @ericachidi for inspiration to use this challenge to amplify that it’s been almost 200 days since #BreonnaTaylor was murdered and her killers have not been brought to justice. Or to remember #SandraBland and the countless other Black women who have been killed by police or died in police custody. If you’ve been nominated to participate in this challenge, use your platform to get their names trending again! Click the link in my bio for more info on @aapolicyforum’s #sayhername campaign. And let’s always say their names. #womensupportingwomen #blacklivesmatter

Thank you to all the brilliant and beautiful women in my life who sent the most uplifting messages today. Truth be told, I don’t really understand this #challengeaccepted thing…but who doesn't love good reason to support women! Soooo…. challenge accepted! ⠀ ⠀ And while I have you here, maybe the best way we can support other women is to REGISTER TO VOTE for the issues that affect women. Encourage all your friends, girlfriends, sisters, moms, daughters to do the same. The election is right around the corner, and we need to look out for each other AND love each other! ??‍?‍????‍?‍??????‍?‍??❤️

Challenge accepted. #istanbulconventionsaveslives #womenempowerment #womensupportingwomen - I’ve been told that the true meaning of this hashtag and this b&w photo- ‘It is to shed light onto the Istanbul Convention, women are being subjected to violence and this convention is to end forgiveness for the attacker/murderers.’ With that in mind, adjust your hashtags if you didn’t already do so. Thank you @jessicaroseweiss, @bellathorne and @edibow for inviting me. Let’s ride gals. Post your b&w in support of this movement, these women need the world to hear.

The heart of this trend feels meaningless, especially when so many are just posting the pictures with the two hashtags in the caption. The bright side of this trend is we’ve seen an uptick in awareness for the Turkish femicide epidemic, and some of the people who have hopped on this trend have promoted good causes through the caption. People who have used this opportunity to share important info include Rashida Jones, who called for justice for Breonna Taylor, Jennifer Aniston, who encouraged her followers to vote in the upcoming election, and Florence Pugh, who highlighted the problem of violence against women in Turkey.

While these trends may seem well-intentioned, they usually don’t come across that way to many people, especially when celebrities are posting beautiful black and white photos to their Instagram with no actual reason behind it. The trend uses vague messaging that allows itself to be spread without actually saying anything of importance or actual substance. It's important to note that there is also value in a trend that is just intended for women to post selfies, have fun, and feel good about themselves. However, when it's done under the guise of activism, it just comes off as performative.

Collage credit: Gabriella Shery is an illustrator, graphic designer, and comic artist from Brooklyn, New York. You can find her work on Instagram at @gabshery, or on her website at gabriellashery.com

The "Gossip Girl" Meme Offers Some Joy During Dark Times

Tags: celebrities , Instagram , women supporting women , viral trends
Support Feminist Media!
During these troubling political times, independent feminist media is more vital than ever. If our bold, uncensored reporting on women’s issues is important to you, please consider making a donation of $5, $25, $50, or whatever you can afford, to protect and sustain BUST.com.
Thanks so much—we can’t spell BUST without U.