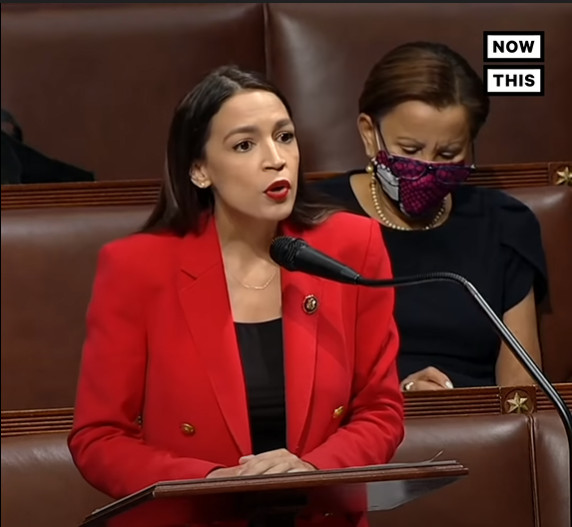 The women in congress are kind of on a roll, and we’re pumped about it.

Although Yoho denied the incident, he issued an apology on the House floor on Wednesday, claiming that since he has been married for 45 years and has two daughters, he is “very cognizant” of his language. “The offensive name-calling words attributed to me by the press were never spoken to my colleagues and if they were construed that way, I apologize for their misunderstanding,” Yoho said in his speech, according to USA Today.

AOC responded the next day with a speech that quickly took over Twitter. In her speech, AOC said that Yoho used his wife and daughters as “shields and poor excuses for behavior.”

“When you do that to any woman, what Mr. Yoho did was give permission to other men to do that to his daughters,” AOC continued, according to USA Today. “In using that language, in front of the press, he gave permission to use that language against his wife, his daughters, women in his community, and I am here to stand up to say that is not acceptable.”

AOC also took the opportunity to say that this was not the first time she had been spoken to like this. Alongside being called names while working as a waitress, on the streets and subways of New York, AOC also remarked about things other politicians have said about her—including when the president told her to “go home” and the Florida Governor called her “whatever that is” before she was sworn into office.

“Dehumanizing language is not new,” AOC said. “And what we are seeing is that incidents like these are happening in a pattern. This is a pattern of an attitude towards women and the dehumanization of others.”

A full transcript of AOC’s speech is available at USA Today.

In other news, last week Arizona Senator Kyrsten Sinema came into work with a mint green (it looks blue/purple in photos) wig on. Needless to say, some politicians thought that the fashion accessory was an inappropriate choice for a senator.

This is a sitting female US Senator https://t.co/B7yVvOVhCz

The only statement Sinema made on the matter was when she corrected an MSNBC reporter on the color of the wig—that it was mint green, rather than blue like the reporter said, according to The Daily Beast. However, something similar happened in May when Sinema debuted a lilac-colored wig and her team said that the senator was setting an example by social distancing and not going to salons to get her hair done, opting to experiment with wigs instead.

Needless to say, the women in Congress have been killing it lately.