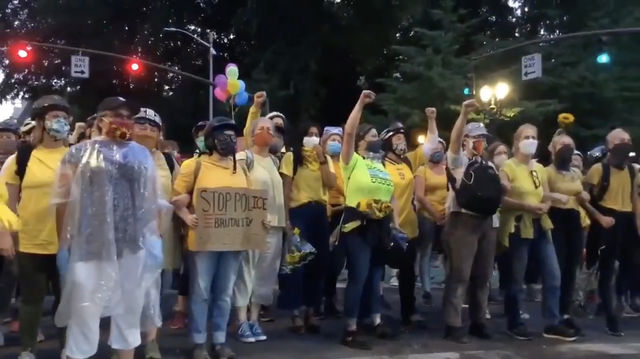 At the Black Lives Matter protesters in Portland, Oregon, on Sunday, dozens of women wearing yellow and handing out sunflowers formed a protective "wall of moms" around demonstrators during a confrontation with federal law enforcement.

A massive crowd had gathered for the protests. Portland police said in a statement that demonstrators were blocking roads and causing disturbances.

Protestors in the crowds were chanting “Feds stay clear, moms are here!" and "Feds go home!" before a fence outside a federal courthouse was toppled. Federal agents violently responded with tear gas and flashbangs.

More protesters have arrived. A line of women haves linked arms to block the street. I’m told they call themselves the “wall of moms.” They’re chanting “feds stay clear, the moms are here” pic.twitter.com/eyYpUuoSRV

Police said dozens of people carrying weapons and protection like shields, helmets, gas masks, umbrellas, bats and hockey sticks tried to enter the courthouse before federal law enforcement dispersed the crowd. Portland PD said that none of their officers were at the protest, nor did they attack any of the demonstrators. Federal agents dressed in camouflage with no identification were also using unmarked vehicles to grab protestors.

Following the killing of George Floyd, the Black man whose death in custody in Minneapolis triggered global demonstrations against police brutality and systemic racism, Portland has seen numerous protests and demonstrations. One protester was critically injured when an U.S. Marshals Service officer fired a less-lethal round at his head on July 11. The protestor, Donavon LaBella, suffered facial and skull fractures and required facial reconstruction surgery.

Some members of the Wall of Moms group had been out at protests the previous nights and were there because their children had been attacked and tear-gassed in earlier protests.

The clash between federal agents and the Wall of Moms on Sunday came on the tails on the city’s mayor condemning federal police for "escalating the situation."

"Their presence here is actually leading to more violence and more vandalism. They're not wanted here. We haven't asked them here. In fact, we want them to leave." Mayor Ted Wheeler said on CNN. The presence of federal agents will be addressed in court in the future.

President Donald Trump said in a tweet on Sunday that the government is "trying to help Portland, not hurt it." But he also blamed leadership in Portland for losing “control of the anarchists and agitators."

10 Cool Embroidery Hoops That Are Fighting For Social Justice

A City In North Carolina Approved Reparations For Black Residents