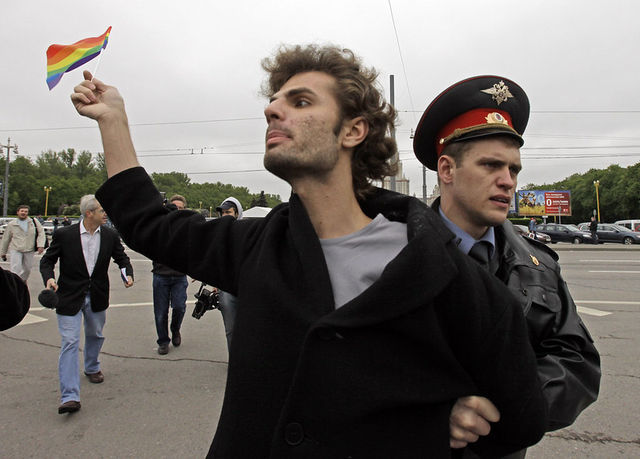 Russian lawmakers have submitted legislation to ban same-sex marriage. The ban comes two weeks after voters approved a set of constitutional amendments that would define marriage strictly as a “union between a man and a woman.” Not only does the legislation ban gay marriage, but adoption. However, discrimination against same-sex couples looking to adopt was already rampant. Now it’s just enshrined in the law.

According to senator Yelena Mizulina, one of the co-authors of the bill, “The bill ends the practice of marriage between persons of the same sex, including those who changed genders.” However, there’s no mention of banning transgender marriages or adoptions in the proposed legislation. Also, Mizulina’s language is murky. Does she mean transgender people in queer relationships can’t get married, or does it extend to heterosexual trans folks? It’s unclear.

Not only will the constitutional reforms (if passed) ban gay marriage, but will validate Putin’s four consecutive terms as president and allow him to run for reelection in 2024 and 2030. The changes were championed by Putin who’s closely aligned himself with the Russian Orthodox Church and has tried to distance Russia from Western values and liberalism, which to him, include tolerance of queer people.

Homosexuality was actually decriminalized in Russia in 1993, but Putin’s governance has curbed any sort of progress that was being made. A Putin presidency is clearly a threat to LGBT+ rights, but a constitutional amendment would make it difficult for his successors to legalize gay marriage even if they wanted to.

The bill has to go through three rounds of voting in the State Duma, or lower house of parliament, and one in the upper house Federation Council before it’s signed into law by Putin.

Drawing Vaginas Can Get You Jailed In Russia

Tags: LGBT , Russia , gay marriage , rights , Putin
Support Feminist Media!
During these troubling political times, independent feminist media is more vital than ever. If our bold, uncensored reporting on women’s issues is important to you, please consider making a donation of $5, $25, $50, or whatever you can afford, to protect and sustain BUST.com.
Thanks so much—we can’t spell BUST without U.