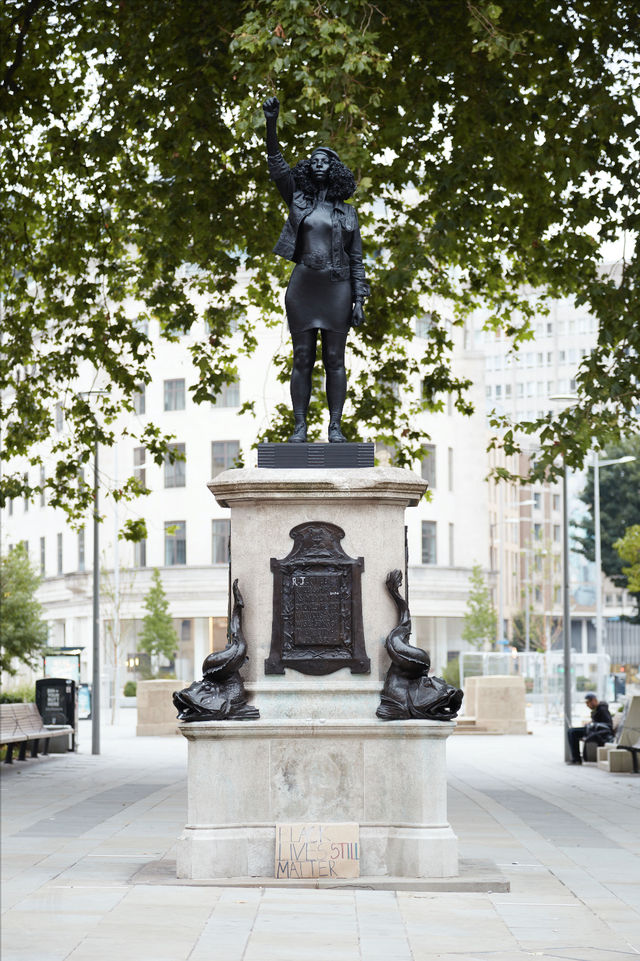 British artist Marc Quinn erected the statue of a black woman with her fist raised in a Black Power statue. Quinn said he based the statue on the viral photo of Jen Reid, who climbed on top of the empty place where Colton once stood during the demonstrations.

Quinn got in contact with Reid after the photo of her went viral and made the life-size statue of the powerful scene using black resin. In a press release, Quinn said the sculpture, "is an embodiment and amplification of Jen's ideas and experiences, and of the past, present and her hope for a better future."

"[My friend] showed me a picture on Instagram of Jen standing on the plinth in Bristol with her fist in a Black Power salute. My first, instant thought was how incredible it would be to make a sculpture of her, in that instant. It is such a powerful image, of a moment I felt had to be materialized, forever. I contacted Jen via social media to discuss the idea of the sculpture and she told me she wanted to collaborate." Quinn said.

"Jen and I are not putting this sculpture on the plinth as a permanent solution to what should be there—it’s a spark which we hope will help to bring continued attention to this vital and pressing issue," Quinn added.

"This sculpture is about making a stand for my mother, for my daughter, for Black people like me. It's about Black children seeing it up there. It's something to feel proud of, to have a sense of belonging, because we actually do belong here and we're not going anywhere." Jen Reid said.

The sculpture of Colston had been controversial for years because of his involvement in the Atlantic slave trade and had been called for removal time and time again. The bronze statue had stood in the city center of Bristol since 1895.

The new statue, officially titled "A Surge of Power (Jen Reid) 2020," is only meant to be on display temporarily. Quinn confirmed that they did not receive permission from authorities to put up the sculpture. If the artwork is to be sold, Quinn said that profits will be donated to two charities, of Reid’s choice, that promote the inclusion of Black history in school.