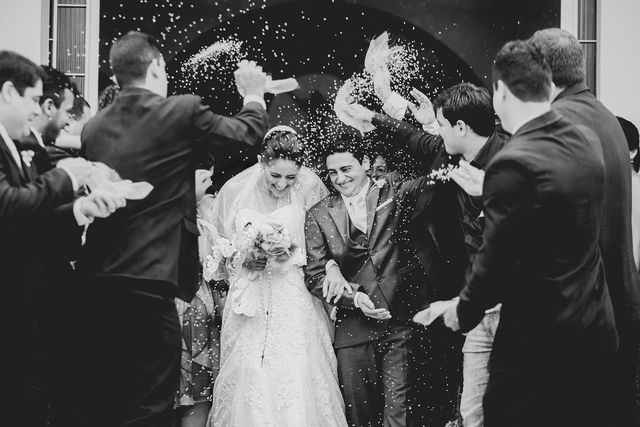 I love weddings. I really do. What’s not to love? Beautiful venues, free cake, watching family members’ drunk dancing, and an excuse to break out your old homecoming dresses from high school. However, the older I get—and the further I dive into feminist literature—the more I question the traditions we follow at weddings. I may love them, but weddings are just weird.

You invite everybody you know and pay for each of them to eat, pick your favorite friends to stand next to you and pick what they’ll wear, wear an over-the-top white dress with a veil like it’s the 1800s, and have your dad walk you to your partner to “give you away.” The bouquet toss, the garter thing—out of context, this all sounds like the agenda of a few lovestruck teenagers and not two adults agreeing to spend the rest of their lives together. So I looked into it. Why is it that we do all these weird things at weddings? Some of the reasons are pretty unbelievable.

Many wedding traditions have practical explanations: brides held flower bouquets to cover the smell of body odor in a time before deodorant. This is where the June wedding thing started as well: June weddings were ideal because it was shortly after everyone took their annual baths in May (yes, really). Others traditions are less practical. It used to be considered good luck to have a piece of the bride’s clothes, so wedding attendees would try their best to rip the bride’s clothes off. They started doing the garter toss to “appease” the crowd and save the bride from a really embarrassing situation. This reason also explains the bouquet toss.

The white dress, to my surprise, actually came about after Queen Victoria married Prince Albert in 1840 in her favorite white dress, and the trend just kind of stuck. The whole virgin thing came later. In Roman times, veils, which were originally flame-colored, were thought to scare off evil spirits by making it look like the bride was on fire (now there’s a cool idea). Its other purpose, as well as the train of the dress, was to make it harder for the bride to run away (a less cool idea). Bridesmaids—who used to dress just like the bride—were there to confuse evil spirits (or exes) and to prevent the bride from being kidnapped.

However, the most confusing tradition I’ve seen is being “given away” by the father and the woman taking the husband’s name. Being given away by your father used to symbolize the transaction that was being made. Before women could own property or hold jobs or have money, they were essentially their father’s property until they got married. Upon their marriage, the ownership of the woman transferred from the father to the husband (usually accompanying some sort of payment from the groom to the father). The father escorting the bride down the aisle and placing her hand in the groom’s hand was representative of this transaction. The bride taking the husband’s name was also indicative of this transaction—of her becoming a part of his estate rather than her father’s.

Now, of course, it’s your wedding. You can do whatever you want. If your father walking you down the aisle means a lot to you, then do it. Just because it has sinister origins doesn’t necessarily matter if it means something to you. And a lot of the other traditions might really just come down to the aesthetics for you, which is also fine. However, I think it is important to bear in mind just how many deeply-rooted traditions that we continue to practice today are based in misogyny and the ownership of women — I mean, seriously, veils kept brides from running away. It's especially important to consider when we follow these traditions without question on the big days in our lives.

Regardless, I really do love weddings. You can’t beat free cake and booze.

How To Plan A Lesbian Wedding: A Guide For Newly Engaged Lesbians

Tags: weddings , wedding traditions , feminism , veils , patriarchy , history
Support Feminist Media!
During these troubling political times, independent feminist media is more vital than ever. If our bold, uncensored reporting on women’s issues is important to you, please consider making a donation of $5, $25, $50, or whatever you can afford, to protect and sustain BUST.com.
Thanks so much—we can’t spell BUST without U.