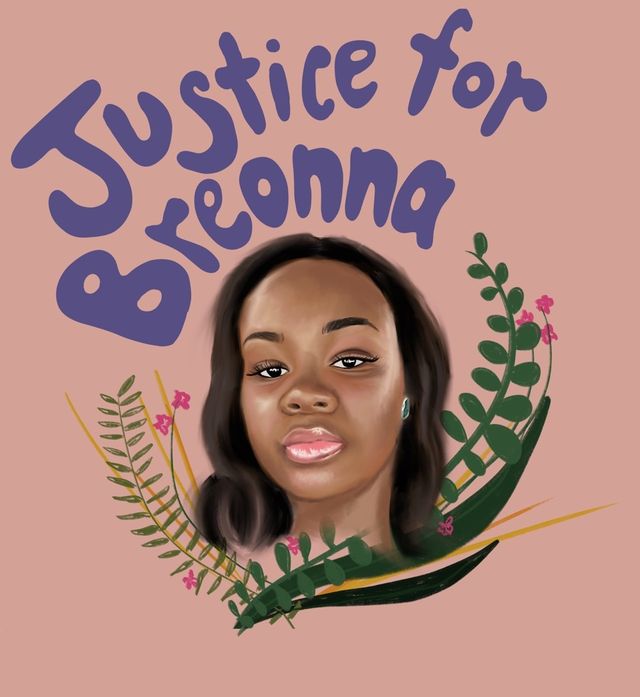 If you’ve been on the internet in the last few months, you might have seen the phrase “Arrest the cops that killed Breonna Taylor” pop up a lot. Breonna Taylor was a 26-year-old black woman who was shot eight times by police when they showed up at her and her boyfriend’s home with a no-knock warrant. Since her death and subsequent inaction when it comes to the arrests of the officers that killed her, people have been calling for justice.

But some might say that the death of Breonna Taylor has become something of a meme – something you post because everyone else is posting it, and while people might believe what they’re posting, it comes off as very disingenuous to have the caption of your selfie be “Arrest the cops that killed Breonna Taylor.” Breonna Taylor was a real person, not something for someone’s Instagram caption.

Breonna Taylor was shot to death by police in her own home. She was shot 8 times. She did not deserve to die. Let’s amplify her name and her story and continue to take her death seriously. She is not a meme or a concept. She was a person and she should be alive.

Recently Riverdale actress Lili Reinhart was in some hot water for this. She posted a topless photo on Instagram with the caption, “Now that my sideboob has gotten your attention, Breonna Taylor’s murderers have not been arrested. Demand justice.” This did not sit well with a lot of people as they thought it was tone deaf and also thought Reinhart was using Taylor’s death as an excuse to post her photo. Reinhart has since apologized and deleted the photo.

Don’t sit here and praise Lili for being woke... this was NOT it. Don’t say it was a joke, don’t say she was raising awareness, don’t say it’s not a big deal, a WHITE PRIVILEGED woman showing off her body as a way to “promote” justice for Breonna Taylor is helping in what way? pic.twitter.com/dN37cupt4T

But the problem didn’t start with her and it doesn’t end with her. Turning Breonna Taylor’s death into a meme strips her of her humanity and makes everyone desensitized to her death. Once you hear the same thing over and over again, it becomes much easier to tune it out and become desensitized. This is why we can’t let Breonna Taylor’s death turn into a meme, because we cannot become jaded to these kinds of stories and we can’t allow ourselves to think of this as normal.

Memes are something that millennial and Generation Z grew up on and largely shaped the way in which we view the world. It makes sense that we turn things into memes, but it doesn’t make it right. The intentions might have been good at first, to spread awareness and visibility for her death and the cops who killed her.

But it’s turned into something much more dangerous. If we keep turning her into a meme, we’re going to forget the real reason why she became a meme in the first place. Her murder along with George Floyd’s sparked a movement this year, but it feels less like a movement when you say the same thing over and over again with no action. Memes over time lose their meaning and become something different entirely from its original iteration, we cannot let that happen with Breonna Taylor’s death.

Imagine you pass away tragically and receive no justice and the world turns you into:
•a meme
•a photo caption
•a Tik Tok song
•an afterthought

This is the harm you’ve done to Breonna Taylor and everyone who loved her.

Recently, there was a TikTok where a user danced to a song where someone said “Arrest the killers of Breonna Taylor” over a beat. And while the people dancing to this audio might think that the intentions are good, they’re also helping turn her death into a meme instead of a movement.

The way y’all turned Breonna Taylor into memes... now a dance challenge? What’s not connecting? I’ve never seen y’all do this for the men, EVER.

It’s also worth noting that we haven’t seen this kind of memeification when it comes to black men who are victims of police brutality, only women. We need to ask ourselves why that is. Is it because we take the death of black women less seriously? Because that is certainly what it feels like when watching Breonna Taylor’s death turn into a meme. Black women who are victims of police brutality already have a hard time getting their stories out there and getting visibility, but is becoming a meme the right kind of visibility for something this serious? We need to #SayHerName, but not as a meme – we need to mean it.

The problem with the memeification of Breonna Taylor is that it makes it seem like her death was just an Instagram caption and nothing more. People will post the caption without even really thinking about it now, which is dangerous. There needs to be thought and care when we talk about her. And action. It’s great that her case has been getting more visibility, but the way that it’s been happening is very troubling.

STOP WITH THE, “SO ANYWAYS, BREONNA TAYLOR” AND THE MEMES AND THE CLIKBAIT POSTS! YOU ARE DEHUMANIZING HER, NORMALIZING HER DEATH, AND CLEARLY BECOMING DESENSITIZED TO BLACK PEOPLE DYING!! SHE DIDNT DIE SO YOU COULD GO VIRAL ON TIKTOK. SHE WAS A HUMAN BEING STOP THE DISRESPECT

It also makes her death and the movement look like a meme or a trend. And it’s not. The Black Lives Matter movement has been active since 2013, and it’s not going to stop after the news cycle is over. Black Lives Matter is not a trend, and treating it like it is makes it seem like the problem is just temporary. It might be for nonblack people, but it isn’t for the black people who are actually facing the problem. After the news stops covering the protests and people forget about the police violence against black people because the news has moved onto the next breaking story, the problem will still be there. Breonna Taylor’s cops will still not be arrested and black unarmed people will still be subject to police violence.

For some people, making Breonna Taylor into a meme might seem harmless when in fact, it’s anything but. They may think that this is their best way of making a difference, but it’s not making the difference that they think it is. Instead of making people more aware of what’s happening, they’re oversaturating people’s timelines with the same caption and threads and memes, leading to people being desensitized to something so heinous.

Breonna Taylor was a real person, a real human being who was wrongfully murdered by the police, not a meme. The Black Lives Matter movement was built by black women, and black women have historically stood up for black men who are victims of police brutality. We need to do the same for black women.

Turning Breonna Taylor into a meme is a slippery slope into turning her death into a joke.

The Black Girl Bill Of Rights Needs To Be Ratified