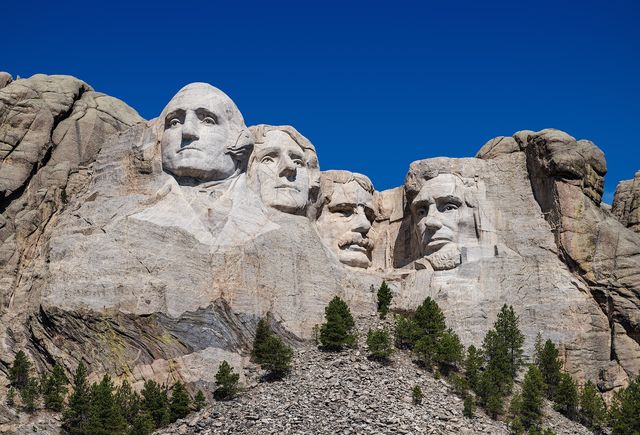 On July 4, 2020, Donald Trump addressed a crowd of thousands at the Mount Rushmore National Monument in South Dakota. The rally was undoubtedly a response to the recent protests against racial injustice, which President Trump called “a merciless campaign to wipe out our history, defame our heroes, erase our values, and indoctrinate our children.”

He stood under the faces of former U.S. presidents George Washington, Thomas Jefferson, Abraham Lincoln, and Theodore Roosevelt on what’s known to Indigenous people as the Six Grandfathers, an edifice that partly comprises the Black Hills. The rally was met by around 100 Indigenous protestors demanding that the president honor a 152-year-old treaty that permits tribal governance over South Dakota’s Black Hills.

A large protest has gathered at the roadblock in front of the path up to Mount Rushmore. pic.twitter.com/xpUnbCmbKg

Both the rally and protests form chainlinks in the history of the United States exploiting indigenous lands and people, as well as the Sioux’s response to settler colonialism. The Sioux Treaty of 1868 and the Treaty of Fort Laramie supposedly granted the Sioux autonomy over a reservation of South Dakota’s land west of the Missouri River.

However, the government violated the treaty just seven years later when General George A. Custer led a military expedition to the Black Hills per order of the U.S. government in search of gold. Miners soon occupied the area and demanded protection from Indigenous people protecting their land. The government responded by increasing the military presence and seizing the land in 1877.

Then, in 1927, the construction of Mount Rushmore began on the Six Grandfathers and was finished 14 years later. The Lakota Sioux named what now bears the faces of four former U.S. presidents after the Earth, sky, and four cardinal directions. Now, the sacred site is named after the white businessman tied to the area’s mining economy.

In the late 1960s and early 1970s indigenous activists from the United Native Americans advocacy group climbed to the summit and occupied it for several months, naming it “Crazy Horse Mountain” as a tribute to the Oglala Lakota Sioux commander who protested the mining economy and died in U.S. military custody.

Hours before the president’s arrival, the Oglala Sioux tribal council voted to ban Trump and South Dakota’s governor, Kristi Noem, from the area. Additionally, Oglala president Julian Bear Runner wrote to the White House asking that they cancel the event after refusing to discuss the matter with indigenous tribal leaders.

Today, protestors who condemned the president’s visit to the site attempted to block the road to the event. They were met by the National Guard who fired pepper spray into the crowd and arrested 12 of the demonstrators. In an interview with PBS, Chase Iron Eyes, advisor to president Julian Bear Runner, said “over the past 500 years, Indigenous voices have been completely ignored or deliberately brushed under the rug. So that sometimes that’s the only way our voice will be heard is if we offer our bodies and we place our bodies in harm’s way.”

You can donate to the Black Hills Legal Defense Fund here to support the protesters that were arrested on Saturday and now face criminal charges.

It's About Time: Land O'Lakes Says Goodbye To Cultural Appropriation