It's Time to Stop “Stanning” Politicians 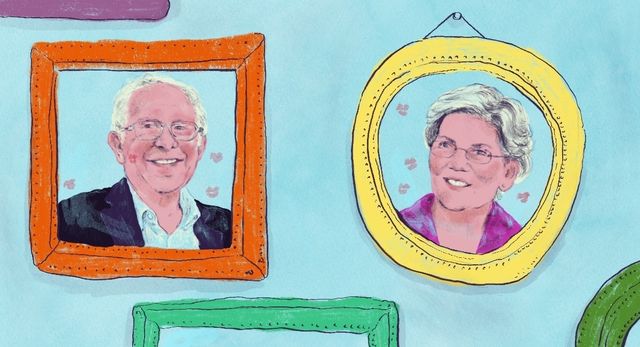 Friends, lovers, comrades, I think it’s time we had this long overdue conversation.

Most of us partake in “stan culture” in some form or fashion. Maybe you’re a member of the BeyHive, or you’re a Star Wars diehard. Stan culture can be a fun way to build online communities of like-minded folks. But “stan culture” left unchecked will be subsumed by its worse impulses — the purity and superiority of the thing you love over everything else, no matter at whose expense. When NPR music critic Ann Powers released a mostly positive review of the newest Lana Del Rey album, stans took umbrage at her description of Del Rey’s persona (unfortunately egged on by Lana herself) and bombarded her social media. Writer Wanna Thompson was cyberbullied and forced to delete her Twitter after a critique about Nicki Minaj went viral, and the Barbz went after her. A petition to remake the final season of Game of Thrones so that it gave the fans the ending they wanted gained over a million signatures. Liking and supporting the work of someone you love is one thing, but demanding that it bends to your will or that someone who doesn’t share your interest be dragged on the Internet is quite another. Unhealthy stan culture in all forms needs to be reexamined, but it should start with how we treat our political heroes.

It’s time to stop “stanning” politicians. All of them! Every single last one of them! You can like politicians. You can vote for them, canvass for them, donate to their campaigns, buy and wear their merch. But putting them on a pedestal and uncritically supporting them is not good for the political health of this country. Politicians are not celebrities, they are public servants.

Recently, some supporters were upset after former presidential hopeful Bernie Sanders expressed his disinterest in abolishing police departments, insteading advocating for cops to be fairly paid. In an interview with The New Yorker, Sanders said, “Anyone who thinks that we should abolish all police departments in America, I don’t agree.” It’s also important to note that full abolition of police departments and calling for them to be defunded are two slightly different proposals, but they generally come from the same ideological place. After an endorsement of Joe Biden, some felt hurt and disillusioned that a man they had previously put their trust in would betray them like this.

Bernie Sanders in particular inspires a certain brand of fervent support, largely due to the fact that there’s no one else quite like him in our political system (if Noam Chomsky calls you “a decent, honest person,” you know you’re on the right side of things). But I don’t know if I quite felt betrayed by this — disappointed, yes, but not exactly surprised. I never thought he was perfect. He’s been a democratic socialist for decades and made a career of speaking out against corporate greed and imperialism. But he has his shortcomings, like voting for FOSTA-SESTA, the 1994 crime bill that Biden wrote, and his failure to effectively engage with Black voters.

By and large, I do not think this applies to a large swath of Bernie Sanders supporters, but every candidate has their supporters who have blinders on. This goes for Elizabeth Warren supporters too; such as the chunk constantly invoking the phrase “ELIZABETH WARREN DOESN’T OWE YOU ANYTHING” when she was questioned over her lack of endorsement for Bernie Sanders. Elizabeth Warren is not the girl boss of your dreams; she’s an elected official. She owes it to us to do her job! Anyone who tried to make Sanders out to be a mean old man singlehandedly crushing the dreams of hardworking women desperate to see themselves reflected in the White House has no actual interest in anything beyond pseudo-feminist politics (and look, I voted for Hillary Clinton in the primary in 2016. I know who that type of woman is, and I regret ever being one!). Sexism obviously played a part in how this most recent primary played out, but it’s a bad faith argument to say that any critique of a female candidate is sexist. Warren’s history of claiming indigenous heritage, litigating on behalf of big corporations, and the fact that she used to be a Republican are all reasonable things to bring up. But at the end of the day, I still like and respect both her and Sanders, and I think they’re generally good people. You can believe in a politician’s message and platform, but it is absolutely imperative that you engage with their history and their shortcomings.

Electoral politics is useful. But they shouldn’t be the extent of our political imaginations. The idea that Bernie Sanders is the alpha and omega of democratic socialism is a dangerous one, as much of the work to champion democratic socialist ideals in this country was done specifically by Black women — not to mention tying socialism to just one person undermines its ethos of collective action over the individual. If you’re getting your takes from Chapo Trap House, and you’ve never once read through the Combahee River Collective Statement, if you solely trust scruffy white dudes named “Matt” over people’s lived experiences, that’s a sign you have work to do. Participating in electoral politics is just step one of civic engagement. True change comes from grassroots organizing, talking to our neighbors, engaging in mutual aid, and working within communities to envision the kind of world we’re after. Electoral politics will never lead the revolution. It responds to its electorate. It can be useful in codifying reform into law, but it’s us regular folks who need to apply pressure. The Civil Rights Act of 1964 happened because people marched, boycotted, and engaged in civil disobedience. Lyndon Johnson, who himself held racist views, was pressured to sign the bill into law from civil rights leaders and a massive mobilization of people. Abraham Lincoln did not end slavery through being a radical abolitionist — he adopted the policy when it became politically convenient (he also did not believe in racial equality). Minneapolis never would have voted to dismantle the police if it wasn’t for large scale protesting and outrage in their city. Direct action works.

Since Trump’s election in 2016, a common refrain among liberals is to “vote blue, no matter who.” What this statement discounts is that someone being a Democrat is not an indication that that person has the interests of different marginalized communities at heart. As many people have pointed out, most of these recent riots in response to police brutality are happening in “blue” cities and states. If you just vote blue and trust that it will make everything okay, you are failing to hold your elected officials accountable. In the United States, our two-party system makes strange political bedfellows of those with vaguely similar goals. As Alexandra Ocasio-Cortez once pointed out, “In any other country, Joe Biden and I would not be in the same party.” Ocasio-Cortez and Biden, though both Democrats, shared radically different views of the future of their party, with Biden holding more centrist and antiquated views. And speaking of Alexandria Ocasio-Cotez, I am absolutely terrified for the day when she fucks up, because she will, because she’s 1) a human and 2) a politician. She’s immensely likable and is generally held in high esteem in leftist circles, but it’s entirely possible that her goodwill will run out, and the tide will turn. If the response to her tweet about Elizabeth Warren’s appearance on SNL is any indication, it’s that those same scruffy dudes named Matt are more than ready to take her down. If we can curb some of our more feverish support now, perhaps it can help mitigate a backlash in the future.

So sure, slap a bumper sticker on your car. Phonebank for the candidate of your choice. Heck, feel free to laugh along if they share a good meme, or appear on a late night show. Just don’t think your work ends there, or that your liberation will solely be achieved by “voting blue, no matter who.” Or, for that matter, through voting for someone you could grab a beer with.