How I Went From Loving to Hating Cards Against Humanity 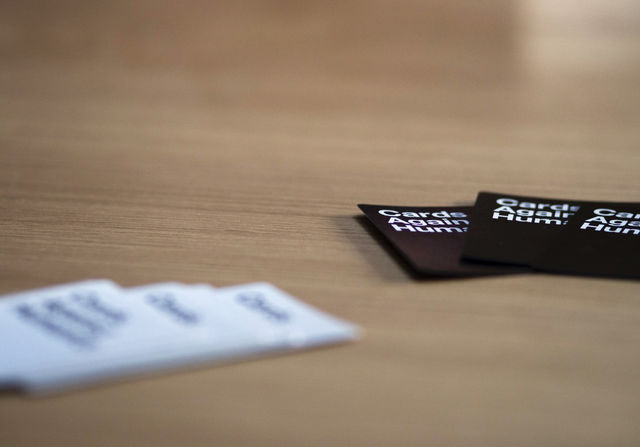 I met my ex, along with the seven other creators of Cards Against Humanity, after I transferred to Highland Park High School. My ex’s encyclopedic knowledge of music history and ability to spiel about underrated 1970’s progressive rock female vocalists gave him nerdy-girl game. When he and I began dating six years later, I would exaggerate the crush I’d had on him to punch up our story, although the person I’d really obsessed over was a different boy who sat across from me in A.P. psych and filled his Xanga with inscrutable Robitussin-inspired verse.

For the first year of our relationship, my ex, like many millennials, struggled to find a job. My efforts to spur him on, driven more by my own pride than by solidarity, were often less than compassionate. When the game he’d Kickstarted with his friends gained momentum, becoming a full-time occupation and, eventually, a phenomenon, it was a huge vindication. I evangelized CAH, introducing the game to friends at every opportunity.

Around this time, my college roommate mentioned that the “chunks of dead prostitute” card disturbed her, since it made fun of murdered sex workers. I resented her for taking offense. When I asked what she thought after meeting my boyfriend, she admitted that he’d made an unkind joke about her appearance. “I can see that he’s sweet to you,” she said. “But I also think he can be kind of a jerk. He overcompensates for his insecurities with his cruel sense of humor.”

I called him that night. “I can’t believe she said that!” I vented, pacing outside our dorm. He was my mate, and my friend had attacked him, but it wasn’t just fierce love that made me so furious. I felt embarrassed, and it was easier to displace my anger onto the person who spoke the truth than to acknowledge that my boyfriend and his greatest achievement both embarrassed me.

When a Bitch magazine article criticized the game, I took my rage to the comments section. You just don’t appreciate gallows humor, I wrote. The game is dependent on the people playing it. Dave Chappelle quit TV because his audience was too racist and stupid to appreciate that he was mocking hurtful stereotypes. If CAH gets “the wrong kind of laughs,” it’s not their fault.

“Some people use political correctness like a hammer,” my ex said upon reading the article. Still, CAH removed the “date rape” card from the game shortly afterward.

When the game he’d Kickstarted with his friends gained momentum, becoming a full-time occupation and, eventually, a phenomenon, it was a huge vindication.

While we were together, a close friend of my ex’s sexually assaulted one of my best female friends. Let’s call him John. Although John was not one of the CAH creators, he belonged to an intersecting social circle. My friend called me the day after we went clubbing to apologize that she wouldn’t be coming to a party at my boyfriend’s house because the thought of seeing John made her feel sick and she didn’t want to cause anyone discomfort.

My ex excused John’s behavior on the basis that my friend had been dancing with him, it was easy to see why he’d “gotten the wrong idea,” he hadn’t gone as far as raping her, and anyway, that was just how John was. A hilarious douchebag, the performativity of his douchebaggery fun and ironic, and I just needed to have more of a sense of humor about his fun ironic ways. Instead of confronting John, my ex allowed me to become a running joke, a caricature of myself, a politically correct shrew who only hated John because she was too stupid and self-serious to appreciate the grand comedy of John’s existence- not because he’d hurt a loved one. My delicate feminist sensibilities had been ruffled, and that was hilarious.

Several months after assaulting my friend then belittling me out of properly standing up for her, John called to troll me. “Would you fuck Adele?” he asked. “Or is she too fat?” Not wanting to confirm his idea of me as humorless, the antithesis of a cool girl, I played along. Adele is hot, I said. Totally fuckable.

Two summers ago CAH founder Max Temkin was accused of rape by a fellow Goucher alumnus. In his blog post denying the charges, Temkin insisted on his continuing commitment to progressive feminism, all while suggesting that his victim’s accusation stemmed from hurt feelings because he had ghosted her a decade before. Temkin managed to simultaneously assure everyone of what a cool, enlightened guy he is and to gas-light the woman he allegedly raped. I can picture my ex in my head right now, hedging, telling me to be rational and dispassionate rather than make assumptions about his colleague. But who would face the wrath of hundreds of bearded Reddit users - and the lawsuit Temkin implicitly threatened in the most self-congratulatory way possible - just to avenge themselves on the hook-up who didn’t text them back their freshman year of college?

I can picture my ex in my head right now, hedging, telling me to be rational and dispassionate rather than make assumptions about his colleague.

In the past few years since my ex and I broke up I’ve tried to excise CAH from my life, but it’s unavoidable, trending on Facebook. My ex has softened his line on political correctness, vowing in the media to “punch up” at people and institutions in positions of cultural power. Women have been hired, although not to create content. Cards like the transphobic “passable transvestites” have been removed. But it’s difficult, if you are a wealthy cis-gendered straight white man who thinks CeCe McDonald wouldn’t have plead guilty if she was truly innocent, who believes that in the absence of evidence we shouldn’t jump to conclusions about George Zimmerman’s culpability, to “punch up.” The “a black male in his early 20s, last seen wearing a hoodie” card has yet to be expunged from the expansion packs.

CAH contributes to underfunded school districts. They fund a scholarship for women in the sciences. In addition to cards like “a big, black dick,” there are cards like “heteronormativity” and “white privilege.” We are socially aware, these cards say. We are deconstructing all the –isms by making fun of them. I genuinely thought this when I was in love with my ex, or maybe willed myself to; while I’d like to believe in the possibility of a love that doesn’t involve denial, I haven’t seen an example yet.

People love CAH for the same reason that they love Amy Schumer’s jokes about dating Hispanic men or having a black friend, which allow her white fans to feel like they are laughing at themselves - that they are more sophisticated than the real racists - while also permitting them to indulge the prejudices they secretly harbor. The brilliance of Amy Schumer and CAH lies in offering a kind of guilty relief, a chance to have it both ways. I should know. It used to be my favorite game.

The discourse around political correctness tends to be dismissive. If you can’t take the heat, get out of the kitchen seems to be the popular attitude. But in a world so full of trauma, why should causing offense be a goal in and of itself? When people are told they shouldn’t be offended, their pain is invalidated, deemed less important than the dominant culture’s supposed right to remain complacent. My ex, due to our relationship, was also friends with the woman John assaulted, but trivializing the matter was easiest for him and, by extension, for me.

“I liked him,” an old friend told me, “but I thought it was weird how he always talked down to you, like you were his younger sister or something.”

Readers might think I’m writing out of bitterness. I won’t deny the bitterness that’s there. A few months after we broke up, my ex and I went out to dinner.

“Do you miss me sometimes?” I asked.

“It’s not like I wake up every morning longing for your sweet embrace,” he said.

Even I had to admit it was a funny line.

#FREEMEG and The Long History of Women Fighting Record Labels