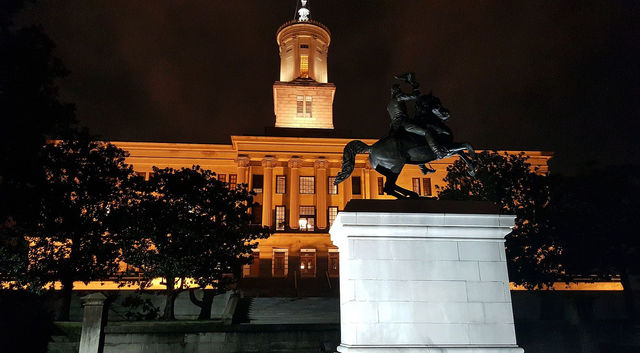 It’s always Tennessee. The southern state’s latest attacks on basic human rights come in the form of an astounding 23-5 majority vote to effectively pass the fetal heartbeat bill, a bill that aims to ban all abortion as soon as a heartbeat can be detected on a fetal monitor. This phenomenon can occur as early as 5 ½ to six weeks into a pregnancy, long before most people even realize they are pregnant.

The bill has now passed. The most restrictive anti-abortion bill in the country. Right here in Tennessee. A deeply upsetting day, but we can assure you this fight is far from over. #TNLeg #StopTheBansTN

The bill passed in the Tennessee State Senate after having passed in the House with a 68-17 majority vote. The bill was initially backed by Republican Gov. Bill Lee back at the beginning of the year who stated at the time, "I believe that every human life is precious, and we have a responsibility to protect it," and proceeded to celebrate the bills passing this weekend by calling the harmful bill the “strongest pro-life law in our state's history." Tennessee Senate Republican leader Jack Johnson was the chief sponsor of the bill.

The passing of this bill comes after a tumultuous and disheartening year for reproductive rights. Just a couple of months ago, many states aimed to use the Covid-19 pandemic as a means to restrict abortion. In 2019, eight separate states attempted to pass regulations as well as full-blown bans that focused on fetal heartbeats and gestational periods. These states include Georgia, Kentucky, Louisiana, and Mississippi who aimed to ban abortion as early as six weeks, Missouri who aimed to ban abortion after eight weeks of gestation, and Arkansas and Utah who attempted to ban abortion at 18 weeks. While all eight of these states were able to pass legislation at the state level, they were struck down by federal judges for going against Roe V. Wade’s 24-week standard.

?BREAKING?
We're taking TN to court AGAIN.
This time, lawmakers have passed a bill banning abortion as early as 6 weeks of pregnancy— just 2 months after TN’s unsuccessful attempt to limit abortion access under the guise of #COVID19 precautions.

Tennessee, see you in court.

The Tennessee bill, which made headlines at the end of last week, will punish abortion providers with up to 15 years in prison and a fine of $10,000 if they perform an abortion after a fetal heartbeat can be detected. The new piece of legislation will require doctors to inform the patient of the gestational age as well as perform an ultrasound with display images and play the fetal heartbeat out loud. This tactic has been criticized by reproductive rights supporters in the past for guilting patients who are seeking an abortion. With this bill, however, the individual can decline to view the image or hear the heartbeat.

There are many other facets to the bill as well. It will require doctors who perform more than 50 abortions a year to post signage on their practice stating that "medication abortion involving a two-drug process could be reversed if the second pill has not been taken” despite the fact that this has been widely disputed in the Obstetrics and Gynecology community. Additionally, the bill prohibits abortions where the doctor knows the individual is seeking to terminate due to the fetus’s race, sex, or diagnosis indicating down syndrome. The American Civil Liberties Union states that these “reason bans” attempt to “insinuate that pregnant people cannot be trusted to make their own medical decisions, and do nothing to address racism, sexism, ableism, or the serious health disparities faced by marginalized communities.”

BREAKING: Tennessee just passed a ban on abortion. We're suing with the Center for Reproductive Rights and Planned Parenthood.

Abortion is a right. If states didn't learn their lesson last year when we blocked seven bans, we will remind them again in court.

In response to Tennessee’s passing of this bill, the ACLU, The Center for Reproductive Rights and Planned Parenthood are teaming up once again to fight back against unconstitutional legislation that attempts to eliminate a person’s right to choose. The ACLU issued an official complaint against the state of Tennessee. The bill was challenged in court on behalf of these three organizations on June 19th. “It is always shameful — not to mention blatantly unconstitutional — when politicians attempt to take away a pregnant person’s right to make the decision that is best for themselves and their family,” senior staff attorney with the ACLU’s Reproductive Freedom Project Anjalia Dalal stated. "But to pass an abortion ban, which disproportionately harms Black and Brown people, when these communities are already suffering under the dual pandemics of COVID-19 and police violence, just proves that these politicians are more interested in furthering an anti-abortion agenda than in serving their constituents. The ability to get an abortion must not depend on where you live or how much money you make.”

The ACLU, The Center for Reproductive Rights and Planned Parenthood asked the court to block the unconstitutional bill as soon as possible as the law will be made effective immediately after being signed by Gov. Bill Lee. Whether or not the emergency lawsuit will turn out on the side of reproductive rights is still unknown.