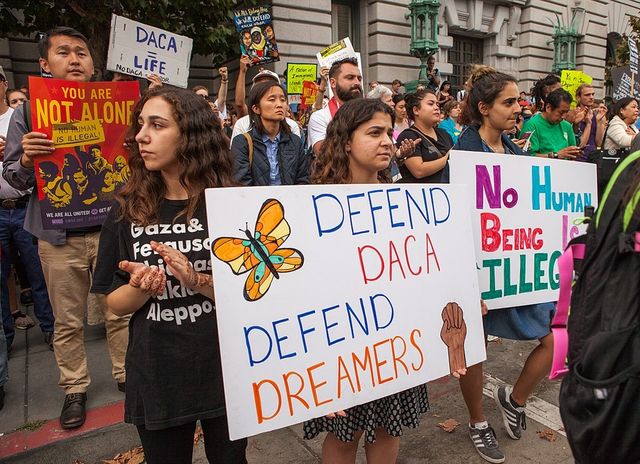 DACA, or Deferred Action for Childhood Arrivals, is an Obama-era law that protects immigrants who came to the United States as children from deportation. On Thursday, a huge win for DACA recipients (also known as Dreamers) came when the Supreme Court blocked the Trump administration’s efforts to end the program in a 5-4 ruling.

Chief Justice John Roberts, who joined the Supreme Court’s four liberal judges, wrote the majority opinion in which he stated that “‘the wisdom’ of those decisions 'is none of our concern.' We address only whether the agency complied with the procedural requirement that it provide a reasoned explanation for its action.” In a dissenting opinion, Justice Clarence Thomas wrote that the decision “must be recognized for what it is: an effort to avoid a politically controversial but legally correct decision.”

This is a big defeat to the anti-immigrant policies that the Trump administration has tried to implement during the President's time in office. Trump took to Twitter Thursday morning to voice his disappointment with the ruling. In one tweet, President Trump wrote that “these horrible & politically charged decisions coming out of the Supreme Court are shotgun blasts into the face of people that are proud to call themselves Republicans or Conservatives.”

On the other side, we saw former President Obama voice his support for the decision on Twitter stating, “Today, I’m happy for them, their families, and all of us.” Obama created DACA as an executive branch memorandum after Congress failed to pass the proposed DREAM Act in 2012.

Eight years ago this week, we protected young people who were raised as part of our American family from deportation. Today, I'm happy for them, their families, and all of us. We may look different and come from everywhere, but what makes us American are our shared ideals…

Other politicians also celebrated along with former President Obama, such as Massachusetts Senator Elizabeth Warren and the Mayor of Phoenix, Kate Gallego. While DACA is by no means a perfect bill, as explained by Maria Hinojosa, it’s still a huge victory for Dreamers.

The Supreme Court made the right choice to overturn Donald Trump’s cruel termination of DACA—but this fight is far from over. I’ll keep fighting to ensure Dreamers and their families have a path to citizenship in the country they call home. #HereToStay

Wonderful news for our #DACA recipients. They are a crucial part of the fabric of our nation and we are lucky to have them. https://t.co/LomcZj8S6l

What does this decision mean for Dreamers? It means that for the time being, people who are participating in the DACA program can keep renewing their membership in the program. The program doesn’t provide a path to citizenship, unlike the originally proposed DREAM Act which was first introduced in 2001. But the program does offer work authorization and temporary protection from deportation.

This Supreme Court decision comes shortly after the ruling that gay and transgender people are protected against discrimination under the Civil Rights Act of 1964.

The Women's March Needs You To Support Dreamers in N.Y.C. This Saturday