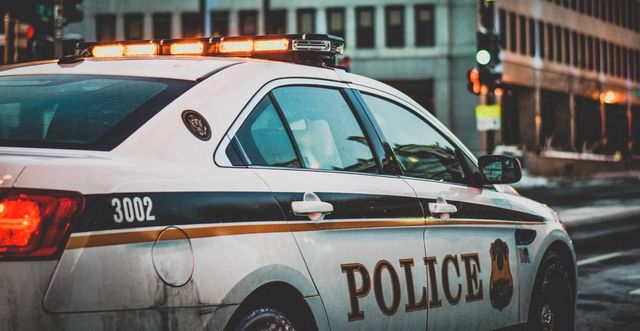 If you’ve been anywhere near the internet since May 25, which hopefully you have been, you’ve probably heard the demands to defund and abolish the police quite a bit. The fact of the matter is, many are weary of these phrases and do not fully comprehend what they mean, nor do they understand that terms like “police reform” and “demilitarize the police” are not enough if we want to create a future free from police brutality and racial injustice at the hands of cops.

Earlier this week, the Minneapolis City Council voted to dismantle the Minneapolis Police Department as it stands, taking the first step into cultivating a community-based model for safety. This might sound radical to some, but Minneapolis is actually not the first city to do this. Seven years ago, Camden, New Jersey disbanded their police department and now stand as a great example of what defunding the police looks like in practice. Once labeled one of the most violent cities in the United States, since Camden disbanded their corrupt police department, crime has dropped by close to half of what it once was. While 100 officers were re-hired after the corrupt officers were let go, the city now revolves mainly around community-oriented policing and has seen the violent crime rate drop by 42 percent.

What does community-oriented policing look like, though? And how can there be a world without police? These are questions many are struggling to come up with the answers to while this movement continues to ignite both online and in practice. Thankfully, a number of activists have taken it upon themselves to answer these questions, offering explanations on exactly what defunding the police looks like, how deep-rooted the corruption of the American policing system is, and why defunding the police must be done in order to create a safer future free of police brutality and racial injustice. Here are eight activists and resources to help you begin or further your education on police abolition:

MDP 150 is a community founded organization made up of artists, researchers, and activists working towards a police-free Minneapolis. Their website offers a number of resources that can serve as a source of inspiration for other cities to begin establishing abolition strategies. One of these resources that has been highly circulated online in the past couple weeks was a graphic, created by @wretched_flowers_ on Instagram, of the MDP150’s discussion on exactly what police abolition means:

The set of images describes MDP150’s definition of police abolition at its most basic level: the process of gradually reallocating resources and funding away from police and toward community-based models of safety. The graphic, which has now been reposted on thousands of Instagram stories and pages, walks through how social workers, mental health professionals, and others could serve instead of the police in a number of situations as well as explains the ways in which police are not just ineffective in many areas of the country, but actively harmful.

MDP150 also notes that many reforms implemented in the past simply do not work: body and dashboard cameras were already implemented when Tamir Rice was killed, and Eric Garner was killed 23 years after chokeholds were banned in New York. This resource is a great place to start your education on why defunding the police is a necessity.

@theslacktivist on Instagram is a great account to follow if you’re looking to stay updated on current political movements and further your education on systemic racism. Throughout the past couple of days, the comprehensive media account has posted a number of carousel-style Instagram posts explaining everything from the racist history of the police to qualified immunity. They have also recently posted two threads on why people say “defund the police,” and what abolishing the police means.

In “Why People Say Defund The Police,” the account explains the definition of the saying, why the police should be defunded, what defunding the police will look like, and how to get involved. Their post titled “What Does It Mean to Abolish The Police” defines exactly what police abolition is and what it would look like. The post also offers some helpful information about how communities can be empowered by non-police solutions. Crucial readings on all topics discussed on the page are included at the end of each thread.

Street Roots, a newspaper based out of Portland, Oregon, recently conducted a poll with individuals experiencing homelessness asking who they would like to see called as first responders rather than police officers. Their answers give insight into what kinds of resources police funding could be reallocated to in order to cultivate a more police-free future.

While a full report can be found on Street Roots’ website, the infographic can help one understand what kinds of professionals would be much better suited for responding to certain situations than police. The individuals polled stated that they would rather see mental health professionals, EMTs, social workers, and others who would likely have better de-escalation skills than law enforcement officers.

Instagram user Gregory Flores created an extremely helpful graphic that gives background into how exactly the police ended up with so much funding and how the re-funding of those institutions that were previously defunded would better impact communities. As Flores explains, funding has been taken away from social, mental health, and addiction services as well as from hospital, education, and after-school program budgets, all while police budgets grew. The only problem is, the police are not trained to respond to a variety of situations that social workers, addiction services, or even after-school programs could better aid. Because of this, society has seen far more excessive force and police brutality and far more incarceration than it ever should have.

This Instagram post is a great way to learn not only about what defunding the police could and should look like, but how you can take action in divesting in police and investing in Black communities.

A trend you may have seen circulating online a couple weeks ago was “8 Can’t Wait.” Created by human rights organization Campaign Zero, this online movement came up with eight police reforms aimed at putting an end to police brutality. While the intentions were in the right place, many activists were quick to note that most of the reforms Campaign Zero purposed were already in place in many states — the rules just aren’t followed. Because of this, spreading and in turn adopting 8 Can’t Wait would do little to put an end to police brutality and might even require more funding to be funneled into police budgets. 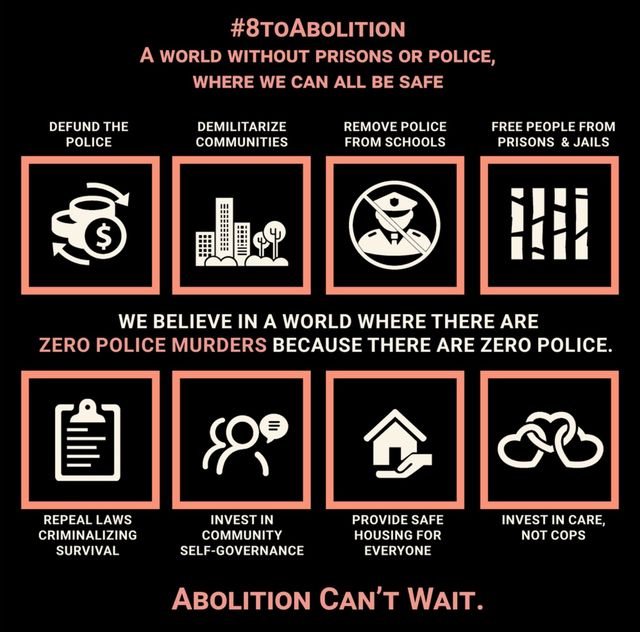 Image via 8 to Abolition

Twitter is kind of like one big encyclopedia for social justice work these days. Sure, Twitter has more than its fair share of trolls and some misinformation, but hundreds of Twitter users have taken it upon themselves to create comprehensive threads on defunding the police and police abolition. By simply typing #Defund into the search engine, you can find your way to the top tweets on #DefundTheNYPD and other city police departments or #DefundThePolice information threads as a hold.

The Mutual Aid Network of NYC has recently posted some helpful infographics that can help you understand just how staggering the police budget is in the city:

Alexandria Ocasio-Cortez posted a pretty great explanation of defunding the police that you can show to your family and friends:

“Defund” means that Black & Brown communities are asking for the same budget priorities that White communities have already created for themselves: schooling > police,etc.

People asked in other ways, but were always told “No, how do you pay for it?”

So they found the line item.

And this woman described the entire journey or how she arrived at being a supporter of defunding the police after being a support of police reform just a week earlier:

This is how I, a 45-year-old white woman and mother of 6, currently at her peak Karen power, went from assuming police work was a necessary part of functional communities, to becoming a passionate advocate for #abolishthepolice #defundthepolice, over the course of one week.

7. @rynnstar and other TikTok creators

Another dark horse for the crucial spread of information is TikTok. Primarily led by Gen Z and millennials, it makes sense that TikTok would become a hot spot for information and videos on the revolution. A number of TikTok creators have posted comprehensive 60 second videos of defunding the police, one of them being @rynnstar. You might recognize her from this song she created about over-policing that went viral:

Wow, I love this song. pic.twitter.com/3rGvghj5gH

The linguist educates her followers on a number of issues, including police abolition. A great video to help you easily understand what reallocating money from the police budget might look like it this one:

Another helpful TikTok on understanding defunding the police was created by the Queen of TikTok herself, Kombucha Girl:

Can we abolish the police? The history of policing in the United States is VERY race based. It’s an interesting google if ur into it

If you’re looking for a singular infographic to repost on your Instagram story or timeline now that you have a better understanding of what defunding the police means, this illustrated guide by @Jua.ok on Instagram might be the single most comprehensive post.

Jua runs through how the discussion on defunding the police gained international attention with the death of George Floyd, the racist history of policing in both the U.S. and the U.K., why defunding is better than reforming, why and how the police are ineffective, and what you can do to help.

Some activists online have even gone on to frame what defunding the police could look like through the lens of other social movements like LGBTQ+ liberation. For example, @globalgirlhood made a great infographic on how police and prisons are not just racist institutions, but anti-feminist institutions as well:

Prisons and police are not feminist institutions. Fortunately, there are several community-based, equitable alternatives. Swipe through to learn about the misogyny inherent to police and prisons, as well as alternatives & groups that are already doing the work. ✨Content and graphics by @chloemoorx. . . #internationalwomxn#storytelling#globalgirlhood#empoweredwomenempowerwomen#intersectionalfeminism#activist#womensempowerment#changemaker#youthactivism#women#motivateme#empoweredwomen#createyourlife#womensrights#womenwholift#womensupportwomen#girlbosslife#girlbossquotes#womenpower#intersectionality#intersectionalfeminist #blm #blacklivesmatter #breonnataylor #georgefloyd #naacp #bystander #ally #activism #blacklives

After furthering your education of #DefundingThePolice and Police Abolition, you can go to Defund12.org to send pre-written emails to the elected officials in your state requesting that they move funds from police budgets towards social services, education, and dismantling racial inequality.