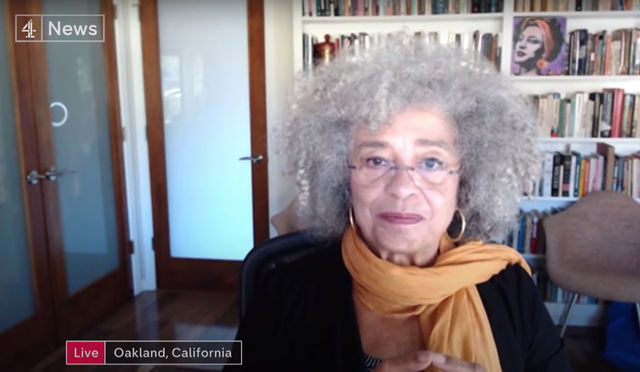 Last night, American political activist, philosopher, professor and author Angela Davis appeared on the United Kingdom’s Channel 4 News to make a statement on the Black Lives Matter movement that can only be described as “immense,” as one Twitter user put it. Perhaps best known for her 1981 book Women, Race, and Class, Davis has been a force in civil rights, feminism, and prison abolition from the 1970s to today.

A queer Black women who has led movements, inspired entire generations, and written dozens of books on social and political theory, it is a privilege to bear witness to Davis not only commenting on, but being actively excited about the call to action we are seeing spread across the globe today.

Live from her home in Oakland, California with shelves upon shelves of books and art pieces behind her, Davis unpacked the current Black Lives Matter movement: “For who knows how long, we’ve been calling for accountability for individual police officers responsible for what amounts to lynching...but under to code of the law," the author said. Davis noted that change must be viewed and must come in many forms including but not limited to political, social, and economic change. The uprisings we are witnessing and participating in here in the United States and abroad are seeking to accomplish just that.

“What we are seeing now are new demands. Demands to demilitarize the police, demands to defund the police, demands to dismantle the police and envision different modes of public safety,” Davis stated. “We’re asked now to consider how we might imagine justice in the future.” Davis suggested that the Black Lives Matter movement of 2020 is not a new movement entirely, but a historical continuum from the uprisings of the 1960s. “This is a very exciting moment,” she added, “I don't know if we have ever experienced this kind of global challenge to racism and to the consequences of slavery."

The 76-year-old activist also commented on the calls to defund the police, offering insight into what this part of the movement means for those who still might not understand. Davis noted that police are often asked to respond to situations that should by no means be attended to by armed people, looking to the recent actions of the Minneapolis City Council, who disbanded their current policing system, as an example for how change can be made. Davis was also sure to speak on issues that have been somewhat lost in conversations concerning police brutality: “We fail to recognize that women have also been killed and particularly Black women who have mental issues,” Davis said. “There’s a long history of inflicting violence and killing them.”

Of course, the last thing Davis was asked to give her thoughts on was how the 2020 election cycle might play out. She noted again how the Black Lives Matter Movement has an overt political dimension, and how the energy created in these uprisings must be harnessed once again in November in order to guarantee that Donald Trump is not re-elected. “This is a pivotal moment,” Davis said. “This is a moment of possibility. It does not mean that we are offered a new future. What we are offered is the possibility of re-imagining and recreating the future.”

A Double Standard As Old As Time: A Brief History Of Rioting