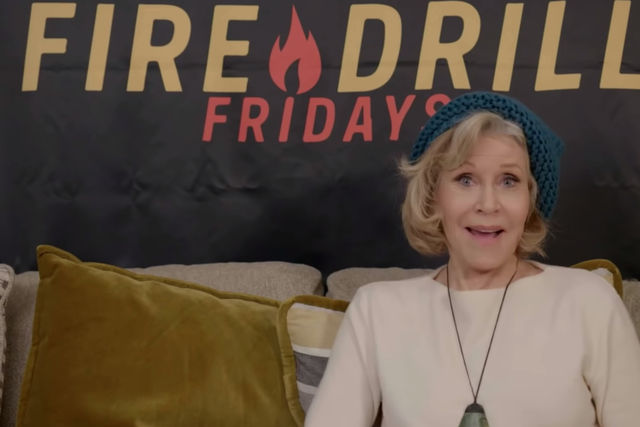 Jane Fonda really has been and forever will be that b*tch. The 82-year-old Academy Award winning actress, perhaps best known for her stand-out rolls in films like Barefoot in the Park, 9 to 5 and Book Club, has never been one to keep quiet about injustice. Just last year, Fonda was arrested on numerous occasions in Washington D.C. for her “Firedrill Fridays,” where she and many of her celebrity friends would stand in protest of big oil and climate change. Her activist work did not start and end there, however. Fonda has been an ally for numerous causes, there to listen to and amplify Black and PoC activists' voices and speak out against various injustices plaguing the United States for years. Of course, Fonda is still here to stand in solidarity today, most recently appearing on CNN to speak about white privilege and the Black Lives Matter movement. Before jumping into her Sunday appearance on CNN, however, it’s important to look back at her decades of activist work and, perhaps, use her actions as an example into how white and non-Black PoC can best support the protests taking place in the United States and around the world today.

Jane Fonda used to lend her home to Black Panthers hiding from the FBI. She even adopted one of their daughters when the parents got arrested. She has ALWAYS been down.

In the late 1960s, Fonda stood in solidarity with the Civil Rights movement, and, most notably, adamantly supported the Black Panthers. Fonda would often hold fundraisers in her home to gather funds and resources for the Black Panthers’ cause which aimed, among other things, to put an end to police brutality. Her adopted daughter, social justice activist Mary Luana Williams’ biological parents were active members of the Black Panther Party.

Also a friend and supporter of feminist and civil rights activist Angela Davis, Fonda visited Davis while she was in prison in 1971 to discuss coming together to put a stop to racial oppression in the United States and around the world.

Around the same time Fonda was standing in solidarity with the Civil Rights Movement, she also joined the efforts of various Native American rights causes. In 1970, a move to reclaim the recently decommissioned military installation in Fort Lawton, Washington was led by activist Bernie Whitebear and a number of Indigenous Americans from Seattle to establish an urban Indian cultural center in its place. Fonda showed up at the events in solidarity.

Between 1969 and 1971, Fonda would frequently visit and stand with the protestors at Occupy Alcatraz, a Native American led movement held to force the United States government to abide by the treaties that they had previously broken with Indigenous people.

Fonda is of course best known for her work in the anti-Vietnam War movement efforts. In the early 1970s, Fonda travelled around the United States and Canada on a speaking tour denouncing the Vietnam War. In ‘72, she toured North Vietnam, continuing to speak out about the United State’s insidious motives behind participating in the war. By radio broadcast, she frequently urged members of the U.S. Military to deeply reconsider their actions in the following order, noting how their participation in the war would result in the death of innocent people, famine, and overall destruction.

The actress earned the title of “Hanoi Jane" as well as quite a bit of backlash from the United States and the Nixon Administration. She led protests throughout the United States, visited prisoners of war, and actively spoke out against President Nixon’s role in the travesty.

The Campaign for Economic Democracy and LGBTQ+ Rights

In the late '70s, Fonda made workout videos and books that sold millions. No, Fonda did not keep the money, but instead it all went into an organization she founded alongside her activist husband, Tom Hayden, called the Campaign for Economic Democracy. The CED promoted liberal candidated running for office as well as invested in protective environmental policies.

"What am I here for if not to be used by good people for good things?" Fonda said in an interview in an interview in 1979 around the same time the C.E.D was kicking off. She was speaking on the LGBTQ+ movement. A vocal ally for queer liberation since as early as the 1970s, Fonda continues to support the movement today. In 2016, Fonda spoke out about the anti-LGBTQ+ law in North Carolina that would require trans folks to use the bathroom that does not align with their gender identity.

Fonda is often noted for using her film work as a form of activism. In 1980, she appeared in the 2nd wave feminism classic 9 to 5 with Dolly Parton, Lily Tomlin and Peggy Pope. The comedy features Fonda and her co-stars getting revenge on their sexist boss.

The actress noted that she participated in the film ro bring light to working women everywhere. “We dealt with all the issues — sexual harassment, unequal pay, the importance of flex hours, the importance of childcare,” she stated. Despite this, Fonda had previously described that it took her a long time to understand and become involved with the feminist movement. Later, however, she jouned the V-Day movement, a movement inspired by the Vagina Monologues by Eve Ensler to stop violence against women and girls. Fonda later founded The Jane Fonda Center for Adolecent Reproductive Health at Emory University in 2001

On the week of Thanksgiving in 2016, Fonda showed up in Standing Rock, North Dakota to support Indigenous Americans in their efforts to protect ancestral land and their water supply from Sunoco Logistics and the Dakota Access Pipeline.

"The people on the front lines are very brave," Fonda said in an essay on the topic in the Times. “They stand, carrying their banners, chanting, and praying with arms reaching toward the sky. They are unarmed as they face the Morton County Police….The aggressor side, with militarized police defending their interests, is represented by those who insist on unfettered extraction of non-renewable fossil fuels no matter the consequences. Greed versus a habitable planet.”

Fonda has been arrested fives times in the name of Climate Justice. Late last year, Fonda held “Fire Drill Fridays” for weeks in front of the United States Capitol, encouraging numerous other celebrities to attend as well and use their platforms and privilege to help make a change. "We would like them to get used to being in the streets, to being at a protest on a regular basis. And eventually, if not right away, engaging in civil disobedience," she said.

Fonda protested in order to also bring attention to the Green New Deal and legislation that could be set in place to protect the environment.

Most recently, Fonda appeared live on CNN with Don Lemon to speak on white privilege and the Black Lives Matter protests taking place today. “Because we’re white, we have had privilege,” Fonda stated in the interview. “Even the poorest of us have had privilege. And we need to recognize that, and we have to understand what it is that keeps racism in place — the policies, redlining, banking policies, mortgage policies. All of the things that are really making it very, very difficult for black people to lift themselves up. The policies have to be changed, and then white people have to understand the history that has led to this and we have to try to change within ourselves.”

Dressed in all black and with a black beret, some suggest that even now she was paying tribute to the Black Panther Party. Speaking on the protests on the murders of George Floyd, Breonna Taylor, Ahmaud Arbery, and police brutality as a whole, Fonda was sure to also make note that white allies must be responsible for educating themselves on systemic racism, racial injustice, and how to best show up for the Black Lives Matter movement. “I realized I didn’t understand enough about the history of racism,” she said, “about slavery and reconstruction, Jim Crow and the New Jim Crow, so for the last three years I’ve very intentionally begun studying.”