Details
BY Aliza Pelto
IN Feminism
Published: 08 May 2020 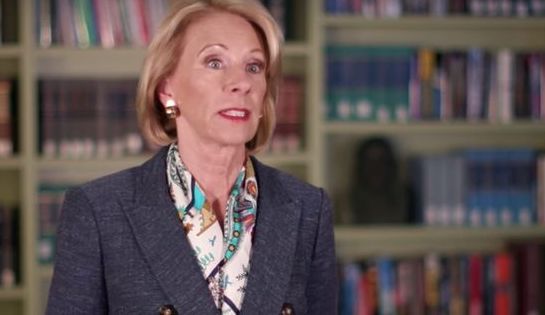 Title IX. Created in 1972, it’s the civil rights law that states, “No person in the United States shall, on the basis of sex, be excluded from participation in, be denied the benefits of, or be subjected to discrimination under any education program or activity receiving federal financial assistance.” Title IX is also the amendment that covers sexual harassment and sexual violence at educational institutions, mandating that schools respond to instances of sexual harassment, violence, and assault, or lose federal funding if they fail to do so.

Since Betsy DeVos was appointed Secretary of Education in the Trump Administration back in 2017, she has taken several steps to alter Title IX, often making moves to make it more difficult for victims of sexual assault on college campuses to report their abusers and see justice served. Now, DeVos and the Trump Administration have succeeded in creating a rule that will give more rights to the perpetrators of assaults rather than the victims.

DeVos has referred to the new rules as a “rebalance of the scales of justice.” What she really means, however, is that protections for accused college students have been increased and a new mandate has been set in place for “live hearings by adjudicators who are neither the Title IX coordinator nor the investigator, and real-time cross examination of each student by the other student's lawyer or representative,” according to NPR.

While the new rules benefit the accused, which is what DeVos ultimately set out to do, they are a nightmare for victims of sexual violence. Many sexual assault awareness groups are concerned that these rules will shift progress back, making victims afraid to report once again. To be subject to a cross-investigation could be extremely traumatizing to victims and by knowing the new rules, they might see reporting as futile altogether.

Under the new mandate, accused students also have the right to appeal and the schools are permitted to raise the standard of evidence from “a preponderance of the evidence,” which is based on the probability of evidence, not quantity of it, to “clear and convincing.” This makes it all the more difficult to find an accused student responsible for misconduct. While dating violence and stalking are now on the list of offenses that schools must respond to, the only sexual assault cases that require investigation are those considered to be “severe, pervasive and objectively offensive.” (Under the Obama Administration, schools were mandated to look into anything considered "unwelcome conduct of a sexual nature.")

When DeVos first started working on these new rules two years ago, she proposed that schools not be held responsible for dealing with off-campus incidents. While her original proposal was altered, schools are still required to investigate off-campus incidents that occur in school-affiliated places, but not otherwise. For example, frat houses would be covered but off-campus houses and apartments would not. Sage Carson of Know Your IX spoke out on the topic, stating that the new rule is extremely worrisome, especially with the knowledge that most instances of sexual assault do not happen in campus buildings. She noted that she was assaulted in an off-campus apartment as a student and was thankfully able to report it under the old Title IX mandates. Now, she wouldn’t be able to. “I would absolutely have dropped out of school,” she stated.

SAFER, a non-profit research and advocacy organization dedicated to empowering students to combat sexual assault on campus, also made a comment on the new Title IX rules after following the situation for nearly two years. “It is a very dark day for those who have survived sexual assault and for all of our nation’s college students,” Board Chair Danielle Christenson stated. “Rather than strengthen and promote more effective policies to make college campuses safer, Betsy DeVos and the Trump administration have taken a giant step backward. Their new rules undue to the progress achieved during the Obama administration and will literally protect abusers.” Both SAFER and Know Your Title IX, along with countless other advocacy groups have condemned the actions of Besty DeVos and the Trump Administration.

Not only do the alterations to Title IX impact college campuses, but K-12 institutions as well. Under the new mandates, K-12 school will be required to have a more in-depth, hands-on approach to allegations and instances of sexual assault and harassment, potentially resulting in the implementation of entire departments and staff positions dedicated to Title IX. Here, the new mandates might be helpful in some ways. For example, schools will be required to inform victims about the punishment of their perpetrators, something some schools had previously kept under-wraps in the past. Once again, however, new regulations will not hold schools responsible for instances that occur off campus. Sarah Pudelski of the School Superintendents Association posed concerns about how the new Title IX regulations would apply to a sexual assault that takes place at a weekend high school party. She stated that the regulations "make it seem as if the district can take action related to the drinking that happened or to a fight that broke out, but if there was a sexual assault, these regulations say, 'Oh, you can't do anything about that.'"

The narrowing of the definition of sexual assault is also applied to K-12 school systems. The regulations apply to any unwelcome conduct that "a reasonable person" would deem "so severe, pervasive, and objectively offensive that it effectively denies a person equal access" to an education. Obviously, that definition is extremely vague, unclear, and subjective based on the kind of person held responsible with handling the situation.

The steps Betsy DeVos has taken have created a major set-back in how educational institutions handle instances of sexual assault. What was once becoming a system that strived to protect and support victims of sexual violence is turning into a system that denies their trauma, experience, and rights altogether while bolstering the rights of their abusers. Schools have been asked to implement the new regulations beginning in August of this year.

Tags: Betsy DeVos , Trump Administration , Title IX , SAFER , Know Your Title IX , #SupportSurvivors
Support Feminist Media!
During these troubling political times, independent feminist media is more vital than ever. If our bold, uncensored reporting on women’s issues is important to you, please consider making a donation of $5, $25, $50, or whatever you can afford, to protect and sustain BUST.com.
Thanks so much—we can’t spell BUST without U.