How This Teen Innovator Is Evening the Playing (Card) Field

Details
BY Bethany Allard
IN Feminism
Published: 07 May 2020 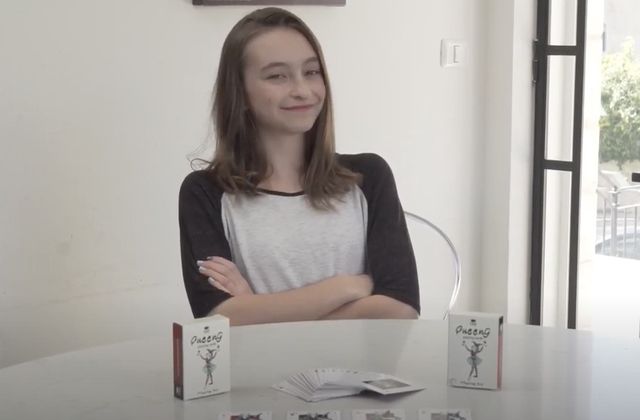 “Why is the King always worth more than the Queen?” Maayan, an Israeli teenager, asked her dad during a game of cards one night. He wasn’t sure. They could have googled the answer or shrugged their shoulders and kept on with their game, but instead, Maayan and her father decided to create a deck of cards that places equal value on the male and female cards.

Maayan announced her project on Indiegogo, where she raised money to make it a reality. She calls the deck Queeng Playing Cards.

Here’s how the game works: the king and queen cards are now referred to simply as monarch cards, and both are equal to what a king card would be in traditional rules. Next come Duke and Duchess cards which, as you might have guessed, equal queen cards by the old rules. Jack cards now are Prince and Princess cards. The set even includes a female joker.

Although the deck isn’t that different from a traditional one, Maayan describes this as a careful balance she had to strike. “One of the main challenges of creating the game was trying to find a balance between designing a deck that is modern and suitable for nowadays without making too many changes to the original old fashioned deck that people have been playing for many years,” Maayan told BUST in an email.

Playing cards have been around since before 1000 AD, with the familiar 52 card deck emerging around the 1400s. That means Maayan and her dad’s idea disrupts a tradition that’s hundreds of years old. Another Kickstarter campaign from 2018 named Kween Cards gender-swapped the king and queen to give women the upper hand (these cards are now available for purchase on Etsy), but no one has created cards where the queen and king hold their same titles, but enjoy equality.

Back in January, Maayan and her dad posted their campaign with the goal of raising $10,000. Since then, they’ve raised over $200,000 to create card sets, which she’ll be shipping out to over 5,000 backers soon. While she admitted to feeling some nerves (and excitement) about how people might react to receiving the actual decks, Maayan’s felt most heartened by the initial response people have had to the project, through comments and shares online. “It really is amazing to see that people all over the world have something to say or add to the equality topic. It is very special to me that many people can relate to my ideas and thoughts,” she said in the email. “I think this topic has to be talked about more all over the world and I am very happy I can take a small part in making that happen.”

Maayan also shared with BUST she’s recently started working on a second edition of the cards with more diversity in colors and ethnicities. Check out her Indiegogo campaign here!

5 Feminist Collectives for Women Of Color Mobilizing On The ‘Gram

Tags: card game , equality , queeng , cards
Support Feminist Media!
During these troubling political times, independent feminist media is more vital than ever. If our bold, uncensored reporting on women’s issues is important to you, please consider making a donation of $5, $25, $50, or whatever you can afford, to protect and sustain BUST.com.
Thanks so much—we can’t spell BUST without U.