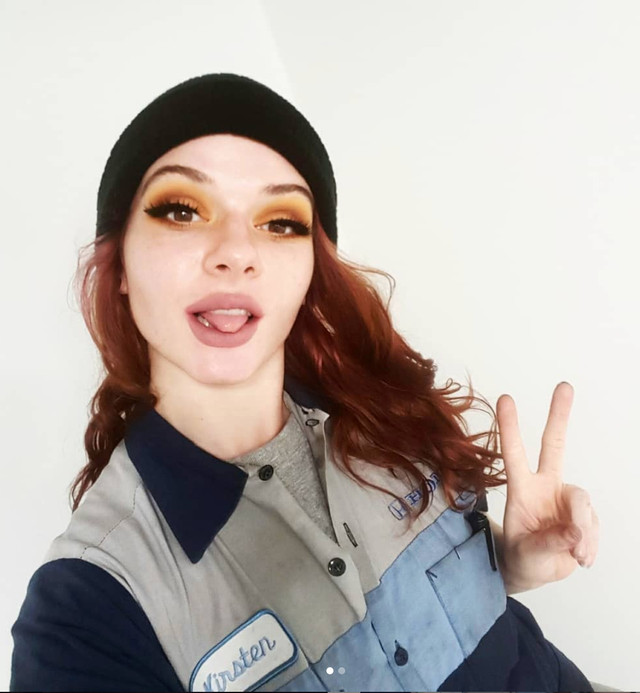 At a Honda Dealership in Fort Wayne, Indiana, a skilled woman mechanic was fired from her job after coworkers found her OnlyFans account, watched it at work, and proceeded to sexually harass her in the workplace. Kristen Vaughn, 24 years old, was set to become the first ever woman Master Technician at the dealership before she was abruptly fired.

OnlyFans, a paid subscription content service, has become a popular medium to share adult content and x-rated entertainment. Rather than punishing the coworkers who viewed Vaughn’s private page at work and sexually harassed her, management at the Honda dealership blamed her for making an OnlyFans account in the first place. “If the guys just would’ve watched their porn at home, none of this would’ve happened,” Vaughn said in a report with BuzzFeed News. “But instead of looking at it like, ‘Hey, the guys are kind of creepy,’ it’s, ‘Oh well, you’re the girl that brought this to their attention, and you’re responsible.'”

Spoke to @vermilionvixxxn about being fired after coworkers watched her videos at the shop. She said she begged them to stop, but the company blamed her anyway.

Vaughn was fired from the Indiana dealership in mid-February. Shortly after, she posted a video on her Instagram page, @ms.reds.wrenching, where she explained what happened in further detail. “When they heard rumors that coworkers were following it, they felt I was a distraction to the shop,” Vaughn stated in the IGTV video. “I think it’s BS that I’m considered a distraction in the shop because that’s not really my fault.”

Recently, more of the story surfaced online when she posted a video of herself on Twitter doing mechanical work referencing the situation. The Tweet went viral, and was eventually picked up by Buzzfeed and a number of other news outlets for coverage. Otillia Steadman of Buzzfeed News was able to get a deeper look into the story, reporting on audio clips that give more insight into the wrongful way Vaughn was fired from her job.

Really a shame they had to fire me for having my only fans page, cuz I got down at my dealership.
Here's me doing a complete a/c system replacement due to "black death" pic.twitter.com/zLBlbI5KHZ

Jason Johnston from the Department of Human Resources at the Honda dealership denied that Vaughn was fired because of the OnlyFans page. Instead, he claims that she was fired for violating a company policy, although they refused to name the policy in which she supposedly violated. In an audio recording of a conversation between Vaughn, Johnston and the General Manager at the dealership, John Watkins, the two blame Vaughn, stating that her OnlyFans could have hurt the reputation of the dealership and citing her as the cause for the coworkers inappropriate actions. “If there were coworkers over there who had access to your page, that might encourage them to approach you with unwanted sexual conduct or comments,” Johnston stated in the recording. A common theme that occurs with sexual harassment and sexual assault cases, Johnston and Watkins were essentially blaming Vaughn for tempting her coworkers to sexually harass her.

“I had a coworker come up to me and...he was telling me how the salesmen were all huddled up in a group, and that he had come up to the group and they were on an OnlyFans page,” Vaughn stated in the report with BuzzFeed. “And he said that he didn’t know it was me until they passed by a picture of my face and he said, ‘I’ve seen a lot of you.’” The coworkers proceeded to harass her both at the shop and online. Vaughn added, “They literally would not shut up about my page. I begged them to not tell anybody, and they would laugh in my face and say, ‘Ha ha ha, we’re helping you make money. Shut up.” Later, Vaughn stopped all mention of her OnlyFans account on her Instagram.

Previously, Vaughn had amassed a following on Instagram for being a woman me mechanic. On her account, she often posts videos with life-hacks on how to fix cars, or just videos of herself in the shop. She also often gives shoutouts to other women mechanics on the platform, creating a community of women within the business. Vaughn told BuzzFeed that she started the OnlyFans as a means to pay off student loans and her mortgage, as well as save up money. One day, the mechanic wants to open up her own shop and repair race cars.

Prior to these events, Vaughn was well respected at the Honda dealership, with the dealership noting that they think very highly of her. “I was a phenomenal employee with a perfect record that never got in trouble,” Vaughn said. “When I went to work and I was on the clock, I did my job and I was good at it. I was appropriate when I was at work. I wore my uniform. I did what I had to do.” While Vaughn was wrongfully terminated, and it was the coworkers who sexually harassed her who should have been punished, what is even more peculiar about the situation is that male employees from the dealership who had appeared on OnlyFans did not receive the same treatment. Another colleague at the dealership appeared in his girlfriend’s OnlyFans account. While teased at work, he was not reprimanded.

Caryn Looper, a former porter at the same dealership, had also started an OnlyFans when she worked there. When it was found, she was sexually harassed as well as assaulted. A coworker groped her and asked “what $20 could get him.” Looper complained about what had happened and went on to later quit, “I knew he was still going to be there, and that’s what really freaked me out,” she said. She later filed a police report of sexual battery. Vaughn brought up the issue of what happened to Looper in the audio recording of the meeting with Johnston and Watkins, asking if they were concerned that something similar might happen to her. Johnston stated that he was "absolutely" concerned about that, “Sexual harassment that you would find personally unwelcome, and that's something I would be concerned about for you,” he said. So why fire Vaughn instead of the men who were harassing her? In the audio recording, Johnston and Watkins also ask Vaughn about the content of her OnlyFans videos. While she shared photos of herself in uniform but was sure to obscure all logos of the dealership. “To me it just does not make sense that they’re so concerned about their image and they’re so concerned about [my OnlyFans page], but they just let [other] things slide,” Vaughn told BuzzFeed.

Vaughn’s situation brought much-needed attention to how sex workers are all-too-often wrongfully discriminated against, mistreated, and harassed. While her viral Tweet and the now-viral news story about her did result in some more online trolls, it also resulted in a flood of support.

I hope she makes her money, in which ever way she chooses, and opens up a mechanic shop that she owns. Get it girl ??

Vaughn told BuzzFeed that when she initially sent out the tweet, she was depressed, but as she began to see masses of support it helped her and made her want to get involved in activism to better protect sex workers. “It highlights how sex workers are not properly protected,” she said, “and it can also be used as a lesson learned for people who want to keep their day job.”

Vaughn noted that while sex work can be a risk, she feels like she made the right decision making an OnlyFans. In her initial IGTV video, she mentioned what she learned from the experience and concluded by saying “The best thing is that I’m just going to try and stay positive. I’m going to do what I can to keep bettering myself because the best revenge is success...Maybe it’s just what I needed to go independent, focus on working for myself.”

Sex Work In The Time Of COVID-19: A Chat With Tequila Mockingbird