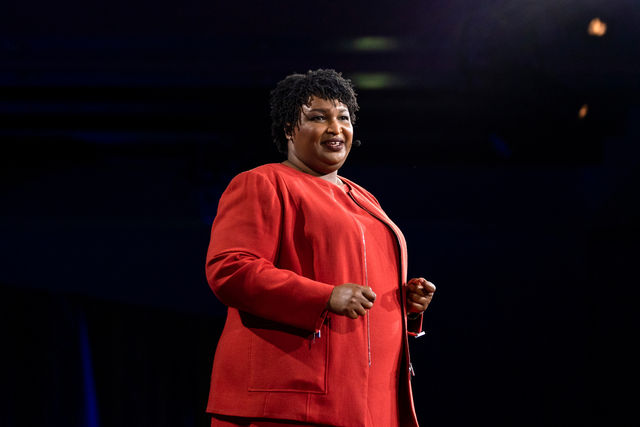 During his debate with Senator Bernie Sanders on March 15, Joe Biden proclaimed he would pick a woman to be his Vice President if selected as the Democratic nominee. Biden was emphatic that is choice would be reflective of the nation; as he said during the debate, "If I'm elected president, my Cabinet, my administration will look like the country." Immediately, this declaration launched pundit speculations as to who Biden should choose. Several names of highly qualified women were floated, including Biden’s former competitors Elizabeth Warren, Kamala Harris, and Amy Klobuchar.

D.C. has no shortage of solid options but now that Biden has become the presumptive nominee, the abstract is becoming tangible and the question now looms as to who Biden will select to be VP.

Stacey Abrams is tossing her hat into the ring for consideration. During an interview with The View on Wednesday, Abrams disclosed that she believes Biden should go a step further and pick a woman of color to be his running mate. On why she feels Biden should go this route, Abrams said, “because women of color — particularly black women — are the strongest part of the Democratic Party, the most loyal, but that loyalty isn't simply how we vote. It's how we work, and if we want to signal that that work will continue, that we're going to reach not just to certain segments of our community, but to the entire country, then we need a ticket that reflects the diversity of America.”

In an interview with Elle, Abrams was candid and explained why she should be considered. "I would be an excellent running mate. I have the capacity to attract voters by motivating typically ignored communities," she said. "I have a strong history of executive and management experience in the private, public, and nonprofit sectors. I’ve spent 25 years in independent study of foreign policy. I am ready to help advance an agenda of restoring America’s place in the world. If I am selected, I am prepared and excited to serve."

Abrams became known nationally in 2018 after her gubernational race in Georgia. Abrams lost to Republican Brian Kemp and has been an advocate for voters’ rights, fighting against voter suppression and gerrymandering—factors that led to her loss. Abrams launched Fair Fight Action, an organization that aims to raise awareness on election reform and offers voter education to help people prior to taking to the polls.

On Monday, Biden spoke with a Pittsburgh premier political pundit, Jon Delano, and said he would take Michelle Obama “in a heartbeat” to be his running mate, if that was something she had any interest in. That may just be a pipedream, however. The former First Lady has made it clear since leaving sadly leaving the White House four years ago that she isn’t interested in running for any office, a stance she even wrote into her New York Times best-selling autobiography Becoming. Biden acknowledged that in the interview, noting, “I don't think she has any desire to live near the White House again.”