As Unemployment Rates Rise, Women Are Hit The Hardest 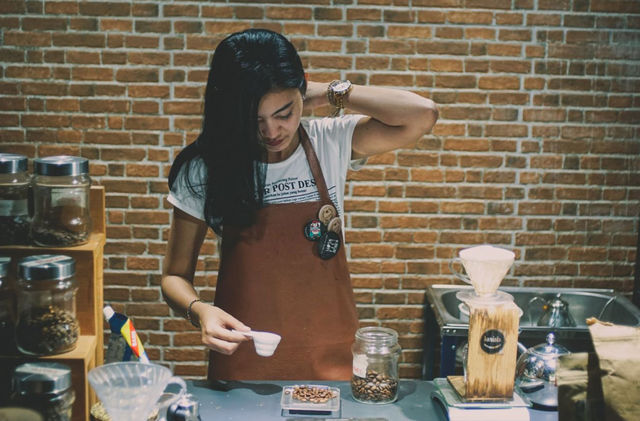 Perhaps one of the most glaring impacts of the COVID-19 pandemic is the unprecedented skyrocket in unemployment in the United States. In just a matter of three weeks, 16 million people have filed for unemployment. This means that approximately 10 percent of the entire U.S. workforce is now indefinitely unemployed. Of the first 700,000 jobs that were lost in the months of February and March here in the U.S., 60 percent of them were jobs held by women, according to a new study from the Institute for Women's Policy Research.

Some of the first businesses that shut down, and the industries that are still most hit by the coronavirus pandemic closures, were hospitality, leisure, retail, professional and business services, and non-durable goods manufacturing. This makes sense. Restaurants and bars had to close to help flatten the curve. Hotels were forced to shut their doors with everyone hunkering down in their homes for social distancing, and so on. Because of this, it also makes sense that women were so disproportionately affected by these layoffs. 70 percent of restaurant waitstaff, 93 percent of secretaries and administrative assistants, 81 percent of office clerks, and 80 percent of receptionists and information clerks are women. 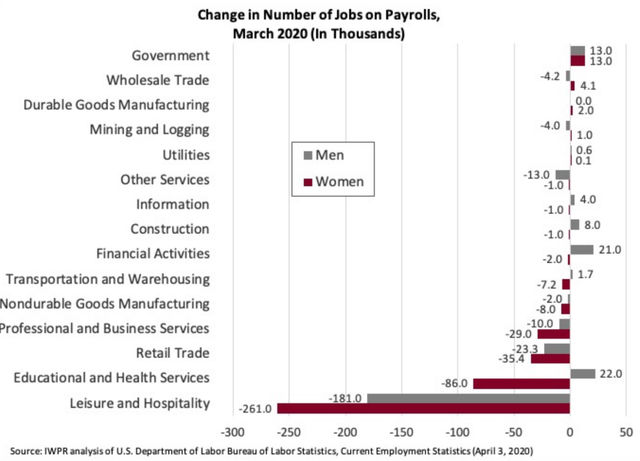 These were not the only women-dominated industries that were impacted, however. Education and health services, which are predominantly women-led, as well as financial services and constructions have also seen a spike in lay-offs for women workers. What’s baffling, however, is that men’s employment actually grew in these four industries.

The troubling amount of women laid off in the midst of the Covid-19 pandemic exposes just how significant the gender gap in the United States is. While the 2008 recession saw a larger number of men left jobless, the fact that restaurants, hotels, retail stores, beauty salons, dental offices, and other industries of the sort showcase why the percent of women filing for unemployment this time around is so staggering. Just three months ago, women surpassed men and took on the majority of the jobs on U.S. company payrolls, but they have once again fallen into the minority.

It’s important to note what kinds of people have lost their jobs and why that might be. The majority of the people laid off are those who are already vulnerable, or might have been experiencing fiscal insecurity to begin with. For example, women aged 16 to 19 are facing an unemployment rate of 14.3 percent, while the unemployment rate of women over the age of 20 is at just four percent. This is likely due to the fact that young women are far more likely to take part-time jobs in the fields mentioned above than any other group. Additionally, the employment rate for Black and Latinx women has proven to be far higher than that of white women. Overall, Latinx women and Black men have been impacted the most by Covid-related cuts and lay-offs. 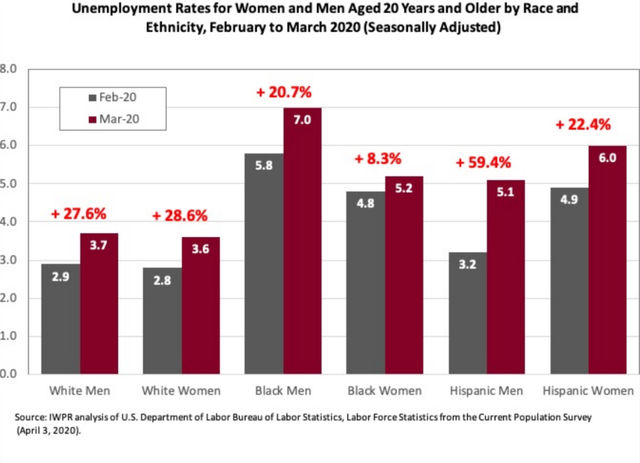 We don’t know yet if the disproportionate amount of unemployed women applies to the latest statistics on the U.S. unemployment rate. What we do know, however, is that when an economic crisis hits, women and these groups that are most vulnerable to begin with are those who pay the highest price.

Cardi B Pledges To Donate $1,000 An Hour To Those Affected By COVID-19

Tags: Unemployment , Women Workforce , Covid-19 , Coronavirus , U.S. Unemployment , Gender Gap , Lay-offs
Support Feminist Media!
During these troubling political times, independent feminist media is more vital than ever. If our bold, uncensored reporting on women’s issues is important to you, please consider making a donation of $5, $25, $50, or whatever you can afford, to protect and sustain BUST.com.
Thanks so much—we can’t spell BUST without U.