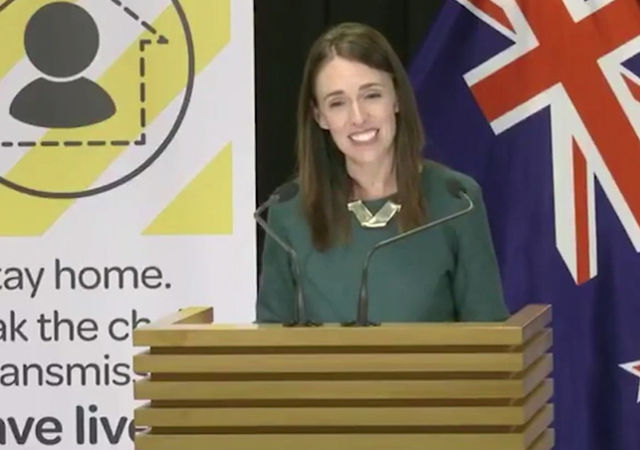 As the world takes on an unprecedented global pandemic, one thing has become abundantly clear: the lives and well-being of the greater population rely heavily on how the people in charge are handling the situation. Remember that one time Donald Trump, and many of his supporters, thought Hillary Clinton would be “too emotional” if she were to become president and “lacked the equilibrium” required to be an effective leader because she was a woman? And then, when Trump became President, we all laughed a nervous laugh as we watched him completely unravel and throw tantrums over social media for all the world to see. Now, it’s not really ironic or morbidly hilarious anymore. As we face a life or death situation, Trump has proved once again that perhaps, he is unstable and lacks the mental equilibrium to be the president. But that isn’t the point here. What is the point is that as the world watches nation’s leaders grapple with what to do in the midst of this pandemic, women in power have generally proved to be more level-headed, more prepared, and above all, more compassionate than other world leaders.

A perfect example of a small act of kindness and compassion from a woman in power is when Prime Minister of New Zealand, Jacinda Ardern, quelled the fears of hundreds of little ones in her country. At a press briefing on Monday, Arden assured children that the Easter Bunny and the Tooth Fairy count as “essential workers” during this difficult time. “You will be pleased to know that we do consider both the Tooth Fairy and the Easter Bunny to be essential workers,” the Prime Minister said. Taking a moment to educate children about the severity of the situation, however, she noted that the two figures might be “quite busy at home with their own families” and that “if the Easter Bunny doesn’t make it to your household we have to understand that it’s a bit difficult at the moment for the bunny to perhaps be everywhere.” This brief showcase of thoughtfulness and compassion towards children, a group that likely has just as much anxiety about the pandemic, even if they don’t fully understand it, shows what you get when you have women in power.

Of course, it is not just this sweet, lighthearted moment that shows the effectiveness of New Zealand’s handle on coronavirus. The country acted with haste, closing the borders to the country just 25 days after the first case. Since then, New Zealand’s four-week lock down has seemed to have an impact on slowing the spread of the virus. Ardern was sure to hold those who have not listened to stay-at-home rules accountable, citing “some people I would charitably describe as idiots.” Imagine if our President called out those not following rules, rather than being pretty nonchalant about the whole affair prior to the last two weeks or so. As of the weekend, New Zealand had a little over 1,000 cases with 15 people in the hospital and one death.

Finnish Prime Minister Sanna Marin has also showcased what can happen when a woman is in charge in times of crisis. The 34-year-old feminist and environmentalist invoked the Emergency Powers Act, something that has never been done in the country during a time of peace. This allowed for more government funds to go towards health care and welfare. While she quickly shut down schools, museums and public places, she kept daycare facilities open--noting that childcare is crucial during this time, especially to help those medical professionals and essential workers fighting the virus at the front lines.

While this proves Prime Minister Marin’s level-headedness and preparedness, as a young woman, she has also thought of various other ways to help combat the spread of the virus that others might not think of. The Finnish government has recently enlisted the help of 1,500 social media influencers. Because not everyone can be reached through official communication, especially certain groups like young people, influencers have been asked to use their platforms in order to spread crucial information about the pandemic and updates from the government. Who else might think of something like this, that will likely end up aiding in slowing the spread of the virus, than a millennial activist in charge?

Although Germany just became the fourth country to reach 100,000 cases, their death rate is remarkably lower than many other nations in Europe and around the globe. This could be largely in-part to the effective rule of long-standing Chancellor Angela Merkel. The fatality rate in the country is 1.6 percent, which is significantly lower than that in Italy, Spain, China and the United States. Why? Because people in Germany trust Merkel and the government at large. They have listened to social distancing rules. The country has also been testing in far greater numbers than other countries. Not to mention, they have an impeccable medical system with plenty of ICU beds and have even enlisted medics (who are, of course, well protected) to visit sick people at their homes five or six days into their infections, a crucial time when it comes to deteriorating health.

The healthcare system in Germany was fostered and upheld by Merkel long before the pandemic hit, which is why they were perhaps more prepared to handle the care of patients than say, the U.S. But Merkel has also been extremely logical since the pandemic reached her country. Just a few days ago, the Chancellor announced that she sees hope on the horizon, but will not be loosening restrictions anytime soon and believed that it would be “absolutely irresponsible” if she were to set an end-date to the restrictions. A stark difference from the President of the United States, who first did not take restrictions seriously, then said they would only be in place until Easter, then had to admit that they would be in place until at least April 30th and will likely have to extend them once again.

It seems that being logical, and letting people know that there is hope of normalcy going forward if everyone continues to uphold social distancing, is far more effective than handing out false hope and disappointment. Of course, nobody knows the meaning of offering effective reassurance and calm to their people in a time of crisis like Queen Elizabeth II. This weekend, the Queen did a rare televised address to the people of Britain for just the fourth time in her 68 year reign. “It reminds me of the very first broadcast I made, in 1940, helped by my sister,” the monarch said in her address. “We, as children, spoke from here at Windsor to children who had been evacuated from their homes and sent away for their own safety. Today, once again, many will feel a painful sense of separation from their loved ones."

The Queen was clear and strong in her address, offering an encouraging tone for how to take-on what still lies ahead. She concluded her speech, "This time we join with all nations across the globe in a common endeavor, using the great advances of science and our instinctive compassion to heal. We will succeed -- and that success will belong to every one of us." While some could argue that the queen is a figurehead, and the people who are truly making the decisions are lawmakers like Prime Minister Boris Johnson, the Queen used her position to provide a sense of comfort and unity rather than be disingenuous and use the time to deny, deflect and confuse. After her address, #MakeAmericaAColonyAgain even started to trend on Twitter. Yes, folks. It really is that bad.

From global leaders, to women working in the health-care and medicine field, to everyday women like the wee Scottish Granny who stole our hearts on Twitter last weekend, at a moment where some are understandably losing faith, women once again show that we can make it through this.

Got this update from my wee granny? 93 and still going strong ❤️ pic.twitter.com/SEjCwLZ8Ww