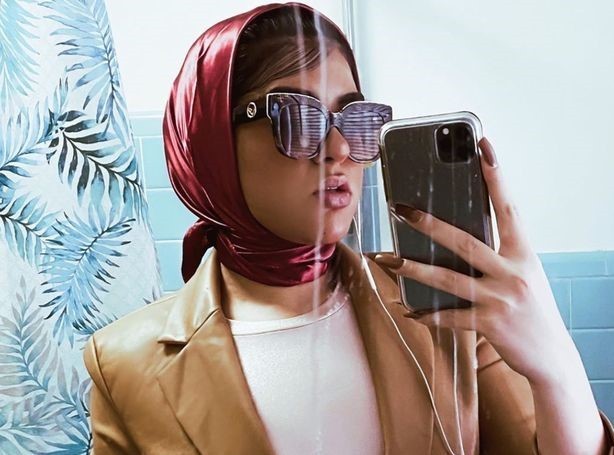 Over the weekend, Al-Khatahtbeh officially announced her campaign via a press release. “This moment is a stark reminder that we can no longer wait for incremental change,” she said. “Our leadership can and must put the health and well-being of working families and the most vulnerable among us front and center. I'm proud to represent a coalition of underrepresented communities in what's nothing less than a historic fight for our lives." On Saturday, the author and entrepreneur also announced her campaign via Instagram to her some 77,000 followers and released a video on her YouTube channel detailing the tense final moments of attaining signatures before the primary deadline. “Hey mama,” Al-Khatahtbeh said in a call to her parents featured at the end of the announcement video. “Its official, your daughter is on the ballot to run for congress...I made it on the ballot mama...first Muslim women to ever run for federal office in the history of New Jersey.”

A graduate of Rutgers University with a degree in political science, Al-Khatahtbeh’s campaign slogan is “Make Democracy Happen.” An active supporter of The Green New Deal, Medicare for All, and student debt forgiveness among other things, the candidate would add to the growing wave of progressive women in Congress. Due to Covid-19 and the public need to social distance and flatten the curve, Al-Khatahtbeh’s campaign trail will be entirely digital. Rather than going door-to-door, the politician will be going on a “Quaran-Tour,” is which she will hold live-streams to discuss local and national issues with various organizations. This will ensure that her campaign is fully accessible. Hopefully, it will also help gain attention from younger voters and get them to show up to the polls both for the primaries and the general election. Although, the state of New Jersey is currently considering a vote-by-mail process since their primaries are scheduled for June 2nd. Even still, with her policy plans, past activism, and presence online, Al-Khatahtbeh is sure to get the support of young voters as well as women voters and voters of color, whose support will be crucial in electing the officials we need to better-represent our nation.

Al-Khatahtbeh first made her way into the public-eye when she was just 17-years-old and founded MuslimGirl.com, a blog that sought to bring Muslim-American girls together and discuss shared issues. A first generation American and daughter of a immigrant and refugee, MuslimGirl.com was born from the founder's frustration with the mis-representation of Muslim women in the media and the need to discuss the fear young Muslim women carry with them when going about their day-to-day lives. The website is not only a platform where issues like these can continue to be more widely discussed, but a place to showcase Muslim women in film and TV, politics and fashion as well as everyday things like health and wellness and relationship tips.

Not only is Al-Khatahtbeh still Editor-in-Chief of MuslimGirl.Com, which has only grown in popularity since it first began, but she has since authored the bestselling book “Muslim Girl: A Coming Of Age,” and founded Muslim Women’s Day in 2017, which celebrates Muslim women every March 27th.

Al-Khatahtbeh is taking a grassroots campaign approach and has vowed not to take any money for corporate interests with a firm belief that the power of the people can change the course of history. You can donate to her cause, follow her digital campaign trail, and learn more about her policies on amani2020.com.

hi. i’m amani. i’m the first muslim woman on the ballot for federal office in new jersey’s history. and i’m running for congress in our 6th district to make democracy happen. ?

Tags: MuslimGirl.Com , Amani Al-Khatahtbeh , New Jersey , Congress , Women in Congress , Politics , Women in Congress , Making History , #MakeDemocracyHappen , #Amani2020
Support Feminist Media!
During these troubling political times, independent feminist media is more vital than ever. If our bold, uncensored reporting on women’s issues is important to you, please consider making a donation of $5, $25, $50, or whatever you can afford, to protect and sustain BUST.com.
Thanks so much—we can’t spell BUST without U.