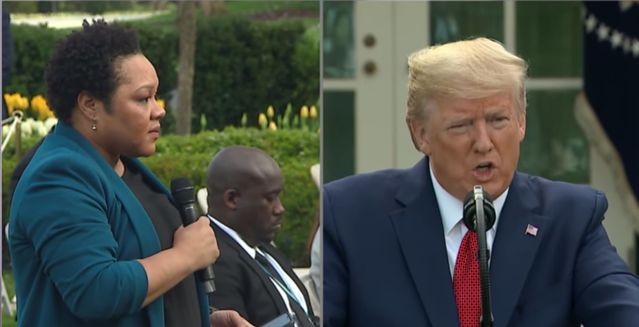 Trump feels threatened by women journalists—this we knew. But the latest instance of Trump attacking a woman reporter and her subsequently standing her ground is one for the books. At yesterday’s Sunday Briefing, Yamiche Alcindor, who reports for PBS NewHour, asked President Trump a simple question in which she quoted his own language from an interview with Sean Hannity on Fox News. In the interview, Trump claimed that state authorities were requesting more medical equipment than he thought they needed. This was a hot topic in the news last week, as New York’s Andrew Cuomo and many other Governors around the nation requested assistance from the federal government that they are in dire need of due to the overwhelming rise of COVID-19 cases. Trump denied the plea for help, stating that Cuomo and other governors such as Michigan’s Gretchen Whitmer need to be nice to him if they want the assistance that their states need. Yes, he literally said that. But that’s a story for a different time. Either way, Yamiche Alcindor’s question needed to be addressed, but apparently Trump’s new thing is wanting everyone to be “nice” to him all the time.

Trump interrupted Alcindor in the middle of her question, denying her citation of the Fox News interview before stating that she needs to be more “positive.” After making a personal jab about the journalist’s career, the president ended his statement by saying, “Be nice. Don’t be threatening. Be nice.” When Alcindor continued to try and get an answer from the president, asking him how his view that state authorities were overreacting would affect the fulfillment of medical equipment, he refused to give a proper answer once again. “We’re producing tremendous numbers of ventilators. We’re doing a great job on it” he said. “You, me, we’re all on the same team. When journalists get up and you’re a journalist, a fine journalist, and ask questions that are so threatening—we’re all on the same team.” Alcindor’s question was not out of line, mean or threatening. But apparently, when confronted with his own words, Trump resorts to bullying, name-calling and belittling in order to protect his ego.

Before Alcindor would ask her follow-up question, the microphone was quickly snatched away from her. Of course, this is not the first time the mic has been taken away from a journalist asking important questions the President didn’t particularly like. But this time around, when the mic was later passed to CNN reporter Jeremy Diamond, he returned the microphone to Alcindor so she should ask her follow-up. In this showcase of journalistic solidarity, Alcindor was able to ask an important question having to do with which (if any) public health officials backed his claim that more people would die from the economic implications of social distancing than the virus itself. If you’re ready for another big shocker, President Trump didn’t not properly answer that question, either.

Thanks to @JDiamond1 for passing me the microphone & letting me ask my second question.

I asked: Which health professionals are telling you that more people will die from the economic impact than coronavirus?

Trump didn’t answer directly and instead just repeated his claims.

In short, the Sunday briefing was a ride from start to finish in which Trump had to back-track on previous statements he made about the severity of the Coronavirus numerous times, tyrannizing reporters trying to get simple answers for the American people in the process . Alcindor took to twitter after the briefing, making a statement about Trump’s treatment of her and countless other journalists. "President Trump today at the White House said to me: 'Be nice. Don't be threatening,'” she said. "I'm not the first human being, woman, black person or journalist to be told that while doing a job.” The entire exchange at the briefing, and Alcindor’s Tweet, remind us of the many times Trump lashed out against women reporters of color. In fact, at one point, Trump demeaned three women of color at three different press events three days in a row. While the president is always sure to call “fake news” on any reporter he doesn’t like, his contempt for female reporters of color is especially visible. In the aforementioned three day extravaganza of Trump bullying Black women reporters, he referred to Alcindor as “racist,” labeled CNN reporter Abby Phillip’s questions “stupid” and called CNN’s April Ryan a “loser.”

Thankfully, the Internet was there to rally behind Alcindor on Monday morning, showcasing support and praise for her actions at the Sunday briefing. #WeLoveYamiche even began to trend, taking the #4 spot in the U.S. rankings with 74,000 posts thanking the reporter for standing her ground and asking these kinds of questions.

Your brilliance is seen as “threatening” by him, keep pressing and being your graceful self ✊?

Keep asking the right questions and know we are right beside you.

This will not be the last time President Trump attacks a journalist and, more specifically, a woman reporter of color for doing their job. But, folks will also continue to rally behind these journalists and thank them for their commitment to getting answers to these increasingly important questions. In the same tweet Alcindor made reflecting on her experience at the briefing, she made a statement that we would all do well to remember: “My take: Be steady. Stay focused. Remember your purpose. And, always press forward.”

President Trump today at the White House said to me: “Be nice. Don't be threatening.”

I’m not the first human being, woman, black person or journalist to be told that while doing a job.

My take: Be steady. Stay focused. Remember your purpose. And, always press forward.