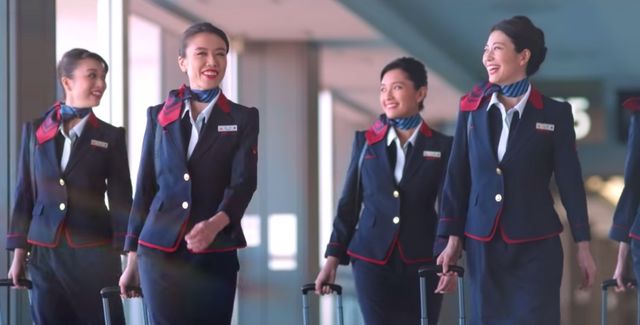 Japan Airlines just became the first major corporation to get rid of the age-old dress code that mandates women wear high-heeled shoes and skirts to work. The new dress code, which will go into effect next month, will allow some 6,000 women crew members to choose whatever footwear they feel most comfortable with and trade out their skirts for trousers.

This a a major win for the #KuToo movement, which has been on a mission to achieve gender equality in the workforce since last year. Started by Japanese actress and writer Yumi Ishikawa, the title plays on the #MeToo movement, and combines the Japanese words kutsu (shoe) and kutsuu (pain). “It’s a great step given that Japan Airlines is such a big company,” Ishikawa told the Thomas Reuters Foundation. The activist was sure to note, however, that steps still need to be taken elsewhere in order to ensure progress continues to be made towards equality in the workforce. “It’s not only airlines,” she said. “There are also hotels, department stores, banks and a lot of other companies with this requirement. I hope they follow this example.”

While not all companies in Japan require that women wear pumps and skirts, it is still widespread. Many corporations will even state in the dress code that women employees must wear 2-3 inch heels. Some have likened women being required to wear high heels to men being required to wear neckties in the way that they indicate professionalism. What women fighting for the #KuToo movement wants to make clear, however, is the social implications of the dress code requirements for women. Many activists have noted that making these dress code requirements of women is power harassment and showcases that the Japanese workforce still has a long way to go in terms of gender equality. Not to mention, wearing 2-3 inch pumps to work every day can be extremely painful for some women and could even result in injury.

Since the movement began, light has been shed on the other ways women in the workplace in Japan have been discriminated against. Four month ago, women in the country took to social media to petition for the right to wear glasses to work after a study TV report exposed many businesses that required women to wear contact lenses.

Japan Airlines' decision to change their dress code is a major step towards workplace equality in Japan. Now, even the Prime Minister of Japan, Shinzo Abe, has stated that he opposes certain workplace dress codes for women. Despite this, it is unclear when and if other corporations will follow Japan Airlines lead. For now, women and supporters of the #KuToo movement will continue to jet-set towards gender equality.