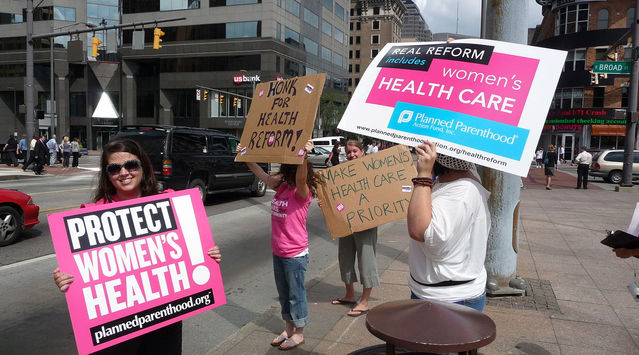 The effects of coronavirus are widespread. One aspect of our society that COVID-19 is having a profound impact on that one might not expect, however, is abortion access. Last week, Ohio Attorney General, Dave Yost, deemed reproductive healthcare ‘non-essential,’ and ordered that all abortion clinics in the state stop ‘elective’ abortion surgeries. “You and your facility are ordered to immediately stop performing non-essential and elective surgical abortions” Deputy Attorney General, Jonathan Fulkerson, stated in a letter to a number of Planned Parenthood facilities in Ohio, a warning that applies to all other clinics in the state as well.

It’s important to note that Ohio’s order did not come out of the blue. The Trump Administration has asked at a national level that “every American and every American hospital and healthcare facility to postpone any elective medical procedures.” The call comes out of a need to preserve protective equipment like masks, gowns and gloves in order to save them for doctors caring for COVID-19 patients. But what exactly is an elective procedure in the first place? While the first things that might come to mind are procedures like cosmetic surgeries and other non-emergent procedures one can elect to do, it actually covers all surgeries that can be scheduled in advance. This can include anything from removing kidney stones, to heart surgery, and even cancer treatments.

In terms of abortion procedures, a few elements of the order are particularly crucial to address. For one, while abortions can be scheduled in advance like many of these surgeries, they differ from a number of them because of how time-sensitive they are in nature. In much of the U.S., abortions can be carried out anywhere between 4 and 6 weeks to 24 weeks. As Ilyse Hogue, president of NARAL Pro-Choice America stated, abortions are a “time-sensitive service for which a delay of several weeks, or in some cases days, may increase the risks or potentially make it completely inaccessible.”

The portion of the order that states for a halt to “procedures that can be delayed without risking a patient's life or long-term health, and without rapidly worsening a health condition,” in also important to look at in the case of abortion. American College of Obstetricians and Gynecologists and the American Board of Obstetrics and Gynecology issued a joint statement stating that abortions are “an essential component of comprehensive health care….The consequences of being unable to obtain an abortion profoundly impact a person’s life, health, and well-being,”

For this very reason, a number of other medical institutions, organizations and state governments are in agreement that abortion should not be counted in the order to cut-back on non-emergent surgeries at both the federal and state level. Officials in Washington and Massachusetts have both said that abortion are not included in the their halt of non-essential procedures. As for Ohio, while the letter to clinics that Attorney General Yost sent out stated: “If you or your facility do not immediately stop performing non-essential or elective surgical abortions in compliance with the [health director’s] order, the Department of Health will take all appropriate measures,” because Ohio it did not call for reproductive care clinics to be closed entirely at this time, many Planned Parenthoods in the state are thankfully still planning to carry out abortion procedures and other life-saving services that their patients depend on. “Planned Parenthood can still continue providing essential procedures, including surgical abortion,” the organization stated, while “doing our part to conserve needed resources and to protect the health and safety of our patients and staff.”

Reproductive rights supporters are standing behind Planned Parenthood at this difficult time. “Let me clarify this misinformation,” co-founder of #VoteProChoice Heidi Sieck stated on the topic of Yost’s order, “abortion is not an elective procedure, it is an essential component of comprehensive health care. It’s insidious for anti-choice lawmakers to use a time of crisis to restrict abortion and reproductive care when every moment matters greatly to the patient’s ability to access the service.” While women's healthcare supporters such as wife of U.S. Senator Sherrod Brown, Connie Shultz, took to Twitter to  calling the order an abuse of power.

This attempt to imperil the health of women in Ohio is an abuse of power by @OhioAG David Yost. https://t.co/JrEAX1qI5z

Ohio has a long and storied history of attacking reproductive rights and limiting women in the state’s access to abortion. In 2011, they became the first state to propose the heartbeat bill, a movement that became wide-spread last summer when many other Southern states began to jump on the bandwagon. Essentially, the proposed bill banned abortion when a heartbeat can be heard which can happen as early as six weeks, when many people have not yet even realized they are pregnant. Thankfully, the bill was blocked by a federal judge, but that hasn’t stopped Ohio from continuing their war on abortion access. They were also the first state to ban “partial-birth abortion,” and require patients to go to two in-person doctors visits before scheduling an abortion. And, last year, lawmakers in the state introduced a bill that would make it a felony for any person to have or perform an abortion, labeling the new crime as “abortion murder.” While the bill hasn’t moved forward since it was introduced, it also called for doctors to re-implant ectopic pregnancies in patients’ uteruses, a dystopian-like idea which medical professionals state is not even possible.

As news broke last week that Republicans tried to sneak anti-abortion restrictions into the COVID-19 Relief Package, it seems as though some pro-life lawmakers are trying to use this global pandemic to further their attacks on reproductive rights. For Attorney General Yost, this order really is just the latest move in an attempt to limit if not completely obliterate abortion access in the state of Ohio. Thankfully, Planned Parenhood and other clinics in the state are doing their best to prevent that from happening just yet.

Image via Progress Ohio on Wikimedia