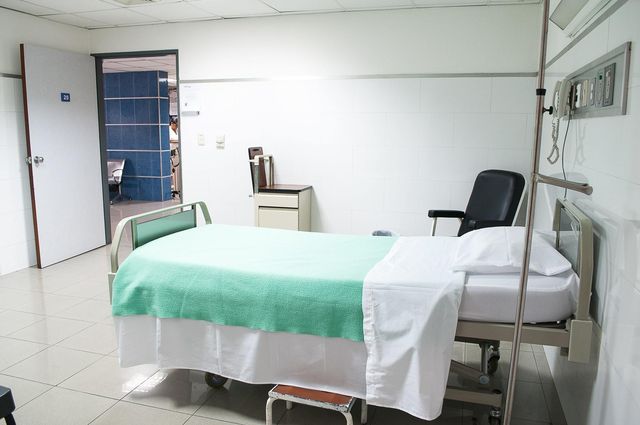 In a week where the world seems to have gone from bad to worse (hello, pandemic) and the future has gone from hazy to incredibly uncertain (seriously, why does the word "pandemic" sound so ominous?), there’s one thing that seems really, really clear: everyone should have access to health care.

On Wednesday, President Trump said in a speech that health insurance companies said they would get rid of co-payments for coronavirus treatments and “extend insurance coverage to those treatments,” as reported by The Washington Post. But the Post also reports that Trump’s statement wasn’t entirely accurate — I know, shocking. For one, private insurers have not pledged to cover the cost of care for coronavirus patients. And they certainly have not expanded coverage for anyone.

While the test itself may not cost money, a trip to the doctor’s office or the ER will, according to Business Insider. BI recently looked at the medical bills of a Florida man who recently returned from China. Exhibiting flu symptoms, he went in to get tested, opting to be tested for flu first due to his limited insurance coverage. He had the flu, and so no coronavirus testing was necessary, but he still had to pay $1,400 out of pocket.

The New York Times also spoke to a father and daughter who the government flew out of Wuhan. The two were quarantined in California and kept in an isolation unit in a hospital upon their arrival. Thankfully, they both tested negative for the virus several times, but after leaving the hospital, they were hit with a nearly $4,000 bill. The pair doesn’t have health insurance.

Susan Herrmann Loomis, a 64-year-old American author and journalist, lives in Paris. But France, unlike the U.S. and like most other European nations, provides health care for all its citizens. Loomis told NPR that while she imagines getting the virus would be uncomfortable, that’s where her worries end. “I'm not worried about the money part or the care part because you know that you're going to get taken care of,” she said. “It takes a huge load off your shoulders.” Another French doctor NPR spoke to was surprised that the question of cost was even being raised.

Now, the test costs are covered under Medicare and Medicaid. And while we’ve established there are more costs than just the test itself, there are still some 27 million Americans that are uninsured, and they are the ones that face the greatest obstacle to getting a test. They’re also the ones that are more likely to be exposed, as many uninsured Americans are working lower-wage jobs that can't be done remotely or do not offer time off — these jobs also expose workers to the public daily. For example, here in New York, as universities close and events get canceled or postponed, restaurants are still operating and serving plenty of customers.

In the wake of this pandemic, some lawmakers seem to be changing their stance on socialized medicine. Take Republican Congressman Ted Yoho of Florida: he’s been against actively Obamacare for some time, but he says he supports the government making sure uninsured Americans get the help they need right now. “Sometimes you have to do things that you have to do for your country, but as far as socialized medicine, no,” Yoho told the Huffington Post. “Does this fall into that? Yeah, I guess you could throw it in there, but hopefully it’s not the long-term.”

Of course, Congresswoman Alexandria Ocasio-Cortez was quick to assert that support of the government is socialized medicine, and that this crisis reveals how necessary it is. “What this crisis has taught us is that our health care system and our public health are only as strong as the sickest person in this country,” she said to the Huffington Post.

Congresswoman Katie Porter drove this point home during a congressional hearing Thursday when she pressed the CDC chief to agree to the agency covering the cost of the test for all patients, including the uninsured. The full test costs $1,331.

Medicare for All would make sure this cost didn’t provide a barrier for care for any patient. On Monday, before the World Health Organization officially classified the coronavirus as a pandemic on Wednesday, presidential candidate Joe Biden suggested he would veto a comprehensive universal healthcare plan.

“I would veto anything that delays providing the security and the certainty of health care being available now,” Biden told MSNBC. “If they got that through in by some miracle or there’s an epiphany that occurred and some miracle occurred that said, ‘OK, it’s passed,’ then you got to look at the cost.”

According to his plan, Biden wants to provide free tests and eliminate co-pays, deductibles, and surprise medical bills during the outbreak, similar to many Republicans who are in support of socialized medical models to combat COVID-19.

Sen. Bernie Sanders spoke Thursday about Medicare for All and the coronavirus, expressing the necessity of a system he’s introduced five versions of a bill for since 2013. This healthcare system has been a major part of both his presidential campaigns.

While we work to pass Medicare for All, the U.S. government must be clear that in the midst of this emergency, everyone in our country—regardless of income or where they live—must be able to get the health care they need without cost. pic.twitter.com/d1kkGJfqay

“Our country is at a severe disadvantage compared to every other major country on earth because we do not guarantee health care to all people as a right," Sanders said in a speech. “In this moment we need to make sure that in the future, after this crisis is behind us, we build a health care system that makes sure that every person in this country is guaranteed the health care that they need."

In other words: health care is a human right. And although the pandemic has made apparent the need for a system where everyone has access to health care, this issue won't stop when coronavirus does.

Katie Porter Dragging The CDC Is My Love Language

Tags: coronavirus , COVID-19 , medicare for all , socialized medicine , healthcare , bernie sanders
Support Feminist Media!
During these troubling political times, independent feminist media is more vital than ever. If our bold, uncensored reporting on women’s issues is important to you, please consider making a donation of $5, $25, $50, or whatever you can afford, to protect and sustain BUST.com.
Thanks so much—we can’t spell BUST without U.