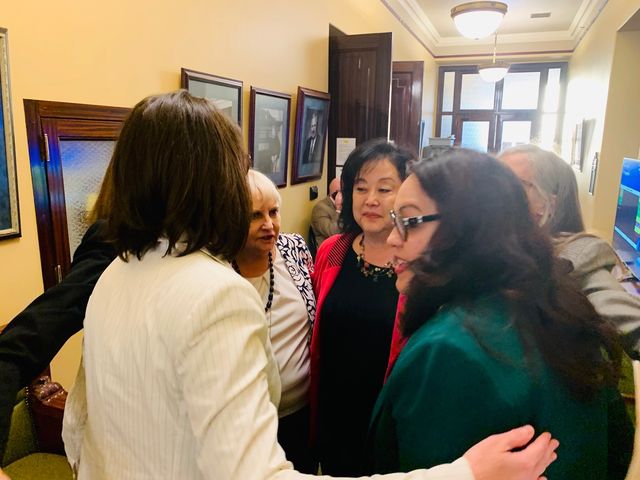 Last week, six women senators in the state of Utah walked out during the vote for a harmful anti-abortion bill that would require women to sit through an ultrasound before undergoing an abortion. The nature of this walkout is noteworthy for a number of reasons. For one, it was a showcase of solidarity, proving that women lawmakers in the U.S. will not stand for the slow dismantling of our reproductive rights. For another, the group of six women that walked out were made up of two Republicans and four Democrats, showing that women from both sides of the aisle can and will come together against injustices.

The six senators who walked out are the only women in Utah's state Senate. Had they stayed and voted on the bill, it would not have mattered: even with five Republican men opposing the bill, it still passed with a 16-7 vote. In taking a powerful stand, their walk out made a far bigger impact than staying and voting would have.

In the state of Utah as of right now, ultrasounds must be done before abortions are performed but results need not be shown to the patients. After the passing of this bill, people having abortions in the state will be forced to view images of the ultrasound and hear the fetal heartbeat if possible. Doctors who do not share the results with their patients can be fined up to $100,000 or more. Even Republican Sen. Deidre Henderson, an opponent of abortion, stated that the bill went too far; her reasoning for walking out was largely due to its “invasive nature.” Whether the women senators who walked out were historically pro-life or pro-choice, all of them made the spontaneous choice to take a stand for this same reason.

The bill itself is completely unnecessary, and the nature of it is disturbing to say the least. Supporter of the bill, Republican Sen. Curtis Bramble, suggested that women simply look away or “not listen” to the heartbeat if they don’t want to hear it. Then why enact this law in the first place? It appears to be just another tactic to try and convince women not to carry out safe abortions: increasing fear and hostility all while limiting access to reproductive health care.

In order to argue against the bill, women lawmakers had to share their own stories to prove how invasive and problematic a bill such as this one would be, but their male counterparts still refused to believe them. “Why do we have to explain to you why this is not right?” Democratic Senate Minority Leader Sen. Karen Mayne stated. “Why?”

Less than a week later, before the bill could be finalized by the House, Senate and Governor, it was dead. While the bill was pushed aside due to other, more important bills that needed to be saught to, many believe that the actions of the brave women representatives caused a trickle-down effect in the Utah government. While one of the sponsors of the bill, Steve Christiansen, hopes to bring it back to the House in the future, it seems unlikely that a bill such as this one would be able to pass again. Even the Republican governor of Utah, Gary Herbert, stated in response to both the walk-out and the bill itself, “We should value their input.There’s nobody that understands birth more than a woman.”

However, all of this is not to say that Utah is becoming a pro-life state. In this legislative session alone, lawmakers in the state signed a bill into law that requires medical providers to cremate or bury fetal remains after an abortion or miscarriage. Additionally, the state gave final passage on a bill that would ban any and all elective abortion if the United States Supreme Court is ever to reverse Roe v. Wade.

While the women of the Utah legislature helped to ensure that this needless, insensitive bill was not passed, the state as a whole clearly has a long way to go.

Tags: Abortion , Pro Choice , Reproductive Health Care , Reproductive Rights , #MyBodyMyChoice , Utah
Support Feminist Media!
During these troubling political times, independent feminist media is more vital than ever. If our bold, uncensored reporting on women’s issues is important to you, please consider making a donation of $5, $25, $50, or whatever you can afford, to protect and sustain BUST.com.
Thanks so much—we can’t spell BUST without U.