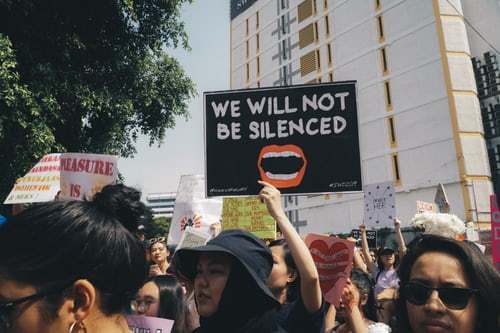 In just three days Mexico will see its largest national strike with a projected 36.4 million women partaking in #undiasinmujeres (a day without women). As a direct response to the overwhelming number of murders and attacks on women in the country, organizers in Mexico are going all in to protest for the lives lost and to raise awareness on changes that need to be made going forward.

Activists and organizers are calling on women throughout the county to virtually disappear for a day: purchase nothing at stores, do not go to work, and stay off the streets entirely. This movement is being met with widespread support from some politicians and celebrities. Some large companies are even giving women the day off in a show of solidarity.

The timing of the strike is made all the more significant as it will take place one day after International Women’s Day.

Gender-based violence in Mexico is extremely prevalent. According to the Mexico's National Institute of Statistics and Geography, more than half of all women in Mexico have been victims or violence by men. These staggering numbers are further underscored by the fact that, of Mexico’s 46.5 million women over 15 years old, 66% have been abused by either a husband or partner and 53% have reported enduring violence at the hands of strangers. According to findings from the L.A. Times, of the 35,558 homicides recorded in Mexico last year, 3,825 of the victims were female. A total of 1,006 killings were officially classified as femicides.

Last month protestors defaced the entrance to Mexico’s National Palace, the presidential office and home, after the gruesome death of a 25-year-old woman named Ingrid Escamilla and a 7-year-old girl, Fátima Cecilia Aldrighett, who was abducted from school and later found wrapped in a plastic bag by the side of a construction site. Rightfully enraged, protestors covered themselves in fake blood calling for justice and an end to the alarming rise of femicides in the country.

Some officials in Mexico have been relatively unresponsive to the initiatives put forth by organizers, perhaps none greater than President Andrés Manuel López Obrador. After the protest at the National Palace, Obrador held a press conference in which he doubled down on his stance saying, “They opposed the moral regeneration we’re promoting. I respect their views but don’t share them. I believe we have to moralize the country, purify public life and strengthen cultural, moral and spiritual values.” He went on to add, “I’m not going to give up my lifelong beliefs because they came and protested. We’re going to struggle to achieve a material change, a spiritual change.”

With the nation’s ruler seemingly indifferent to the harrowing reality faced by countless women, protestors and activists are taking matters into their own hands and ensuring their voices are not drowned out or ignored.

The Glitter Revolution Of Mexico Is Fighting Gender-Based Violence

Tags: Undiasinmujeres , a day without women , Mexico , femicide , protests , violence against women
Support Feminist Media!
During these troubling political times, independent feminist media is more vital than ever. If our bold, uncensored reporting on women’s issues is important to you, please consider making a donation of $5, $25, $50, or whatever you can afford, to protect and sustain BUST.com.
Thanks so much—we can’t spell BUST without U.