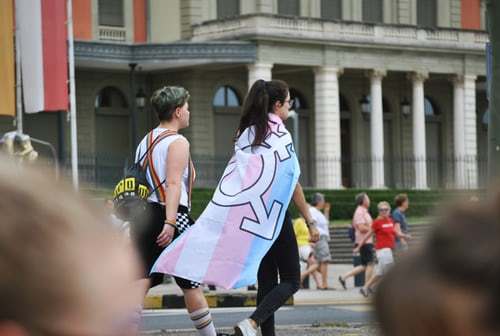 On Monday British writer Suzanne Moore took to The Guardian to pen a column in which she argues that transgender rights are a threat to women rights. In the article she says, “women must have the right to organize. We will not be silenced.”

That message was heard loud and clear by over 200 pro-trans feminists in England.

Taking Moore’s words to heart, these feminists organized and are speaking out to condemn the transphobic sentiments shared in the column with an open letter to The Guardian.

In the letter, the group doesn’t waste any time in making their message clear, stating that they reject the claims put forth by Moore. They go on to say, “We stand together in opposition to such abuse and inequality. As believers in human rights and justice, it is our duty to support all marginalised communities as they fight for respect and equality. And as feminists, we believe that we need to keep fighting for gender-based services and resources together.”

Letter signatories include people from a wide range of politics and media from Phyll Opoku-Gyimah, the founder of UK Black Pride, to several journalists at The Guardian and Pink News.

The rights of the trans community are crucial to protect. Moore may feel it’s a “tiny percentage of the population who are trans” but that doesn’t negate the fact that these are real people who endure hardships to degrees cisgender people couldn’t even imagine. Trans people have been disproportionally targeted by discriminatory laws that make it difficult for them, in some cases, to seek and maintain employment, get medical treatment, or even do something as basic as use bathrooms that align with their self-identification.

For the last seven years the Human Rights Campaign (HRC) has been tracking reports of trans lives lost. As of last year, they found that an average of at least 22 transgender and gender conforming folks have lose their lives each year in the US and this doesn’t take into account the unreported/unknown cases. Some causalities are incorrectly identified due to outlets misidentifying victims by not using their preferred pronouns.

In the most recent case this year, Alexa Negrón Luciano – also known as Neulisa Luciano Ruiz— from Puerto Rico was tragically murdered in late February after a person at a local restaurant filed a complaint against Ruiz for using the women’s restroom. Images circulated online of Ruiz being interrogated by police inside the restaurant. News reports in Puerto Rico referred to Ruiz as a “man in a black skirt”, blatantly disregarding her gender and perpetuating a harmful depiction of what it actually means to be trans.

In a show of solidarity and commemoration for Ruiz, Puerto Rican musician Bad Bunny wore a black skirt and t-shirt that read, translated, “They killed Alexa, not a man in a skirt.”

Bad Bunny used his performance on The Tonight Show to pay tribute to Alexa Negrón, a Puerto Rican trans woman following her recent murder. “Performing his song ‘Ignorantes’ with Sech and the Roots, Bad Bunny took the stage wearing a skirt and a shirt that read, in Spanish, ‘They killed Alexa, not a man in a skirt.’ The statement refers to Puerto Rican media reports on Negrón’s death that refer to her as ‘a man in a skirt’ instead of a trans woman.” Link in bio for the full story.

In her column, Moore states, “It is not feminists who murder trans people, although this might be the impression you would be left with if you relied solely on Twitter for your information.” This comment is troubling for countless reasons, but the underlying failure to understand how anti-trans rhetoric adds to the climate of these attacks and killings is absurd. Such language certainly doesn’t make an already fraught situation any better and is simply divisive. If the goal is to advocate for women’s rights to have autonomy over their bodies then, by its very nature, it is evident that we are stronger together. We should be embracing our trans sisters and looking for ways we can rally behind and uplift them.

Violence against women from all walks of life is a serious matter that needs to be talked about openly. But the particular brutality and viciousness to which trans women and gender nonconforming folx, mostly of color, are harmed and even killed should absolutely be included in all discussions of feminism.

And with shows like Pose coming into the mainstream, recognition of the trans experience is gradually being talked about in a more widespread manner than in previous years. Pose actor Indya Moore, in particular, uses their platform to raise awareness for the transgender and non-binary community.

Bold declarations and shows of solidarity like the one taken by the pro-trans feminists in England are perfect examples of the importance of allyship, serving as a well-needed reminder that there is strength in numbers and injustices against women—ALL women—will be called out boldly and without fear.

Tags: pro-trans , transgender , inclusivity , The Guardian , Pink News , solidarity
Support Feminist Media!
During these troubling political times, independent feminist media is more vital than ever. If our bold, uncensored reporting on women’s issues is important to you, please consider making a donation of $5, $25, $50, or whatever you can afford, to protect and sustain BUST.com.
Thanks so much—we can’t spell BUST without U.