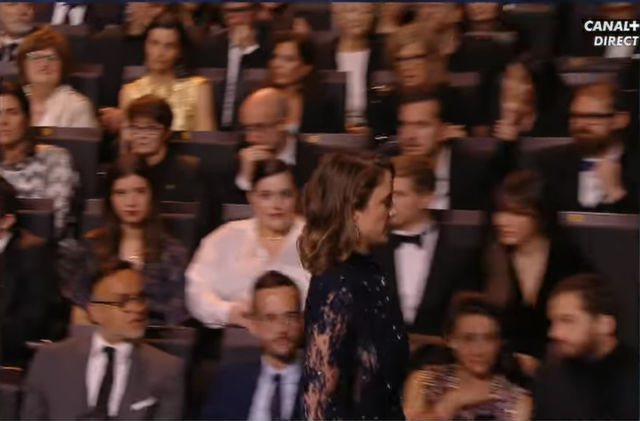 Adèle Haenel, French actress and star of Céline Schiamma’s Portrait of a Lady on Fire, walked out of the 45th César Film Awards and appeared to say, “Shame,” after convicted pedophile and film director Roman Polanski won best director for his film An Officer and a Spy, or "J’Accuse.” The French title that has been adopted by protestors of Polanski and the award show.

To award rapist Roman Polanski for best director in response to women being vocal about sexual assault in France, in today's #metoo era, is the most backwards shit I've ever heard in my life. Adèle, you're a brave hero and icon for survivors everywhere. #merciadelehaenel https://t.co/R9QBXj1MYH

The César Film Awards are the French equivalent of The Oscars. Since his conviction and fleeing custody in America, Polanski has been awarded numerous times and has been praised by celebrities. In 2009, after Polanski was arrested at a Zurich airport in an extradition attempt, 100 celebrities signed a petition calling for his release. This petition-signers included: David Lynch, Tilda Swinton, Martin Scorsese, Wes Anderson, Penelope Cruz, Guillermo del Toro, and many more. After leaving the venue, Haenel is seen with director Sciamma and co-star Noémie Merlant from Portrait of a Lady on Fire. Haenel then claps sarcastically, obviously angry, shouting, “Bravo la pédophilie” or “Well done, pedophilia”.

Haenel came forward in November 2019 and said she had been abused by a powerful film director at a young age. She accused Christophe Ruggia, who directed her film debut “Les Diables,” of sexually harassing and abusing her from the age of 12 to 15. Ruggia has since been indicted by Paris prosecutors and charged with sexual aggression and harassment. Haenal also discussed the #MeToo movement in France which she believes never really took off. Haenel told the New York Times earlier in February about Polanski’s nomination: “Distinguishing Polanski is spitting in the face of all victims. It means raping women isn’t that bad.”

“An Officer and a Spy” was nominated 12 times this year but Polanski did not attend the ceremony because, “Activists are threatening me with a public lynching. Some have called for demonstrations, others are planning to make it a platform,” he told Agence France-Presse. Police fired tear gas on protestors outside the César Film Awards in a clash with people denouncing the director’s nomination. Protestors held signs saying, “Shame on an industry that protects rapists” and even changing his name from “Polanski” to “Violanski” which includes the French word “viol” which means “rape”.

There were other powerful moments during the César Film Awards. French actress Aïssa Maïga called out French Cinema’s long history of racism and the lack of diversity in the award ceremony line up. Like Haenel and few other attendees, Maïga left the ceremony after Polanski’s win for “meilleur réalisateur” or “best director”.

Speaking of courage during the #cesars2020, we should also talk about actress Aïssa Maïga. She stood on stage and called out the whole room for the lack of diversity and the casual racism in French cinema. She is also one of the few who left after Adèle did. Respect. pic.twitter.com/sNBjvoWgf5

The events at the award show started a conversation in France with the hashtag #merciadelehaenel trending on twitter. Many feminists pointed out that this proves that even if a man is convicted of raping a 13-year-old girl, without a doubt, he can still be commended for his directorial skills, his art and even win awards. People will bring up "separating the art from the artist" before they even address the pain that Polanski has caused. In recent years, he has been accused of assaulting and molesting other women when they were children. Numerous actors and celebrities have praised his work and even worked with Roman Polanski even though they know that he is a pedophile. This goes to show just how easily men can be forgiven for their crimes. But, maybe with Weinstein’s historic conviction, things may finally start changing.

Bill Cosby And Roman Polanski Finally Get Kicked Out Of The Academy: Link Roundup

Hey, Remember When All Your Favorites Signed A Petition Supporting Roman Polanski?