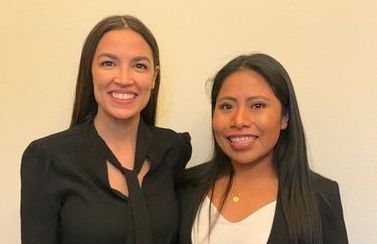 Congresswoman Alexandria Ocasio-Cortez and Oscar-nominated Roma actress Yalitza Aparicio have joined forces to continue the fight for domestic workers’ rights. Both women have been outspoken, longstanding advocates for initiatives that would give better working conditions to domestic workers such as nannies, caregivers, and housekeepers. In many cases, domestic workers are forced into dangerous work conditions with little to no compensation. The Domestic Workers Bill of Rights would put a stop to that.

Ocasio-Cortez and Aparicio met in Washington, D.C. on Wednesday to discuss workers’ rights and took to social media, sharing a photo and support for each other as they embark on moving forward with the push to protect domestic workers in this country.

Ocasio-Cortez has been vocal for years about her support for the act. She has spoken candidly about growing up in the Bronx and watching her mother clean other people’s homes in order to provide for her own family. Her personal history has fueled her to effect change for over two million workers across the country, the majority of which are immigrants and/or women of color.

Aparicio became known worldwide for her breakout performance in the 2018 film Roma, directed by Alfonso Cuarón. The film centered around the day-to-day life of a live-in maid named Cleo (Aparicio) in Mexico City and served to highlight the rough conditions and burdens placed upon domestic workers. Much like Ocasio-Cortez, Aparicio’s mother worked as a maid. In a speech during last year’s International Women’s Day talk in Geneva, Aparicio said, “My mother is a domestic worker, I know many domestic workers, so I did have a concept of how that work shapes up, how that person participates in the family.”

In 2007, the National Domestic Workers Alliance, or NDWA, was formed to promote the rights of those in the domestic field. The NDWA has over 60 affiliate organizations and local chapters that aim to effect change at a local and federal level.

Last July, Senator Kamala Harris and Representative Pramila Jayapal introduced the Domestic Workers Bill of Rights Act to Congress, calling for an end to the unfair treatment of domestic workers who were all too often viewed as second-class citizens. The proposed bill called for provisions in basic rights: earned sick days, breaks for meals and rest—to name a few. In terms of health and safety, the bill is advocating for a national domestic worker hotline.

This new law would make significant changes for the livelihood and overall well-being of domestic workers by ensuring they’d be paid minimum wage as well as overtime. Employers would no longer be able to fire workers without at least a month’s notice of impending termination, a clause that would give workers time to get their finances in order or come up with a plan to avoid becoming homeless.

Some Democratic presidential hopefuls have already pledged their commitment to the National Domestic Workers Alliance, such as Elizabeth Warren, Bernie Sanders, Joe Biden, and Pete Buttigieg.