Can We Talk About The Convenience Of "Himpathy" for Harvey Weinstein? 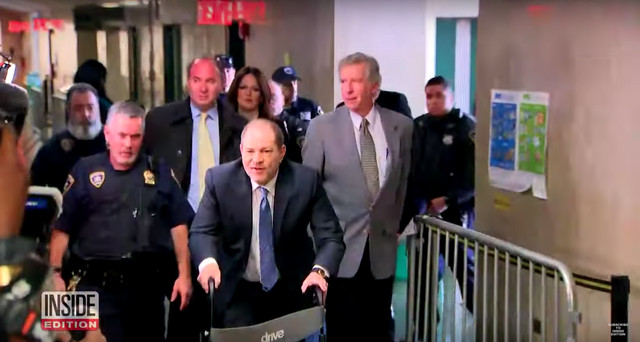 Convicted rapist, Harvey Weinstein, pulled a full Willy Wonka yesterday after leaving the courtroom without his walker, which he seemed to need earlier that day, and appearing completely cured of his bad back and limp.

This modern-day miracle occurred during or subsequently after the Manhattan trial found Weinstein guilty of two felony sex crimes, which he reportedly repeated throughout “But I’m innocent.” The charges include criminal sexual assault in the first degree and rape in the third degree; he faces between 5 to 29 years in prison. Upon entering the hearing, the once-credited producer was doubled over and frail as he staggered forward on his walker. And yet, without any logical, medical explanation, Weinstein was escorted out by police, upright and just fine.

Medical conditions vary from person to person and from day to day and I am in no way trying to make fun of disabilities or illnesses and wholeheartedly understand ableism. However, there is a suspicious element surrounding this case and it all points to one thing that high-profile men rely on when in a predicament like this: Himpathy. Kate Manne, a Cornell philosophy professor, first used the term around the time of the Brett Kavanaugh hearings and describes it as “the inappropriate and disproportionate sympathy powerful men often enjoy in cases of sexual assault, intimate partner violence, homicide and other misogynistic behavior.”

It differs from empathy and sympathy, both of which are terms that allow others to gain another’s perspective and “walk in their shoes.” Femm Magazine explains, “Himpathy is a matter of focused sympathy toward powerful men in alignment with the status quo and patriarchal power systems that sustain it, as well as a lack of empathy toward women who make claims against these men.” By appearing weak, distraught, and emotional the goal is to turn the narrative around on them and help convince the audience that they are innocent- because how could a man who talks about how much he loves his wife and children as he sobs rape a woman?

These men, like Kavanaugh, mention how their reputation is forever ruined (he is now an Associate Justice of the Supreme Court) and use example after example of how great a person they are: “I worked my butt off.” Surprisingly, many people are convinced and express how unfair the process is or make excuses for them, like how they were teenagers, drunk and how their public call-out is enough punishment. Trump called him a “great gentleman” and said he felt bad for him, “he is not a man who deserves this.” Comedian Louis C.K. played a stand-up show at New York’s Comedy Cellar months after news came out that he masturbated in front of women; after the backlash, several people said after losing his career that he had suffered enough. The father of Brock Turner, who sexually assaulted an unconscious woman, lamented his bright future as an athlete and lack of steak-eating.

Furthermore, it isn’t solely sexual misconduct that men are excused for. Mass shooters (who are mostly white males) have lengthy profiles written about them, citing their abuse and troubled life for why they murdered people. A recent Netflix docu-series about Aaron Hernandez, an ex-NFL player who killed multiple people, largely focuses on the death of his father and turbulent home life.

The public is supposed to feel pity for these men and wonder what went wrong, instead of focusing on their vile behavior and the victim’s feelings. And the more emotional and human they seem, the more support they gain. If a woman were to act the way Kavanaugh did during his trial, by screaming, crying and attempting to shift the conversation away from the assault, they would be named hysterical, unfit and be deemed less credible. And if a woman were to walk out of a courtroom without using a walker that she came in with, she would be called an attention-seeking faker.

This Feminist Bakery Is Sending Impeachment Cakes To The GOP

Tags: himpathy , harvey weinstein , trial , rape , sexual harassment , Kate Mann
Support Feminist Media!
During these troubling political times, independent feminist media is more vital than ever. If our bold, uncensored reporting on women’s issues is important to you, please consider making a donation of $5, $25, $50, or whatever you can afford, to protect and sustain BUST.com.
Thanks so much—we can’t spell BUST without U.