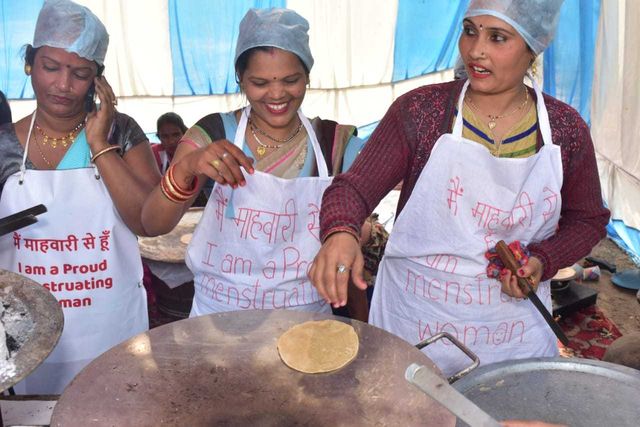 On February 27, New Delhi, India hosted another Period Fest with the goal to remove the stigma of menstruation. More than 300 people attended and signed a pledge to reject the myth that women are impure and unholy during menstruation and to support women against these lies. This year was different, however, as activists were mocking the male priest who claimed that menstruating women who cook for their husbands would be reborn as dogs and more absurd statements.

“It is certain that men will be born as bullocks in their next life if they consume food cooked by menstruating women. I don’t care if you do not like my views, but this is written in our shastras [scriptures]. If a menstruating woman cooks food for her husband, she will definitely be born as a female dog in her next life,” said the religious leader Swami Krushnaswarup Dasji while delivering a sermon. He also made comments suggesting that menstruation was women’s penance.

Dasji was also a Trustee at a college in Bhuj where they forced 68 students to strip and remove their underwear to prove that they were not having their period. His statements and the period-shaming conducted at the college sparked outrage. Since it was so close to the Period Fest, they decided to focus on women cooking while menstruating. They served food cooked solely by 28 menstruating women. They also spread awareness about feminine hygiene and demystified common myths about menstruation like menstruating women cannot take a bath.

The event was hosted by Sachi Saheli, NGO, a non-profit that aims to bring menstruation awareness to Delhi’s government schools. Sachi Saheli’s founder, Dr. Surbhi Singh, said about this year’s Period Fest, “The gathering of men and women in such a large number is evidence that people are not afraid of being reborn as animals, and such incidents and making statements against honour and dignity of women will no longer be tolerated.”

Kamla Bhasin, a feminist and poet, was also present and said, “I condemn the actions and thoughts of people who curse and stigmatize the same blood that gave them life! This Period Feast is a bold and appropriate retort for the misogynistic comments of swamis.”

Menstruating women have faced widespread discrimination in India for a long time. They are considered impure and unholy and are often excluded from social and religious events. Many women have been refused entry from temples and shrines and the kitchen.

The last few months, there have been a staggering number of cases of violence against women. On February 6, a group of men entered Gargi College and sexually assaulted and molested the students of the women’s college. On February 10, a woman died after she was set on fire by an alleged stalker. These incidents have sparked many protests in India. But, these protests and movements, like Period Fest, show that people are fighting back against the stigma and violence and making a difference.

The Women Of Bollywood Are Having Their Own #MeToo Moment