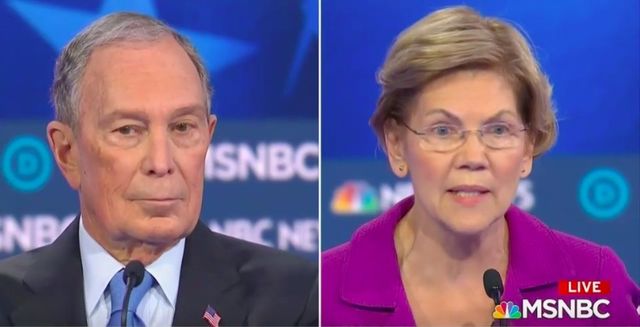 On the debate stage, Massachusetts Sen. Elizabeth Warren and the other Democratic candidates immediately took the chance to address Bloomberg's many controversies and history of racism and sexism.

“I’d like to talk about who we’re running against: a billionaire who calls women fat broads and horse-faced lesbians,” Warren said. “And no, I’m not talking about Donald Trump. I’m talking about Mayor Bloomberg.”

Running on the platform that he is a different billionaire than current President Donald Trump, Bloomberg's entire strategy seemed thrown off by Warren’s comment — and after, he couldn’t seem to find his balance.

When Moderator Hallie Jackson said, “Several former employees have claimed that your company was a hostile workplace for women,” Bloomberg replied that he works with a lot of women and that the work environment that he creates is not hostile towards them.

“I have no tolerance for the kind of behavior that the #MeToo Movement has exposed,” Bloomberg said. “And anybody that does anything wrong in our company, we investigate it, and if it's appropriate they’re gone that day. In my company, lots and lots of women have big responsibilities. And...in City Hall the person... that’s the top person, my deputy mayor was a woman.”

“I hope you heard what his defense was," Warren quipped back. "'I’ve been nice to some women.' That just doesn’t cut it.”

Then, she brought up that Bloomberg has had women sign non-disclosure agreements for both sexual harassment and gender discrimination in the workplace.

She asked, “Mr. Mayor, are you willing to release all of those women from those non-disclosure agreements so we can hear their side of the story?”

“Senator─ No,” Bloomberg said, later clarifying that the women who signed those non-disclosure agreements signed them and that they will all live with it.

Former Vice President Joe Biden joined Warren's side of the argument, saying it would be “easy” for Bloomberg to release those who signed the non-disclosure agreements from them.

“All the mayor has to do is say, you are released from the nondisclosure agreement. Period,” Biden said.

Though the former New York City Mayor qualified for his first Democratic Debate Wednesday with 19 percent of the nation’s support according to a NPR/PBS NewsHour/Marist poll of 1,744 Americans – just coming in second place behind front-runner Vermont Sen. Bernie Sanders who secured 31 percent of the nation’s support – Bloomberg’s past followed him there.

Bloomberg’s history of non-disclosure agreements, racist stop-and-frisk policies, and hidden tax dealings are matters that other candidates and voters are taking into consideration regarding the candidate, who promises to be the “one democrat who can beat Donald Trump.”

His performance on the debate stage, though, tells a different story.

Why The "Can A Women Be President?" Question Is Getting Old