Michelle Obama Inspires Young People To Vote With The #PromChallenge 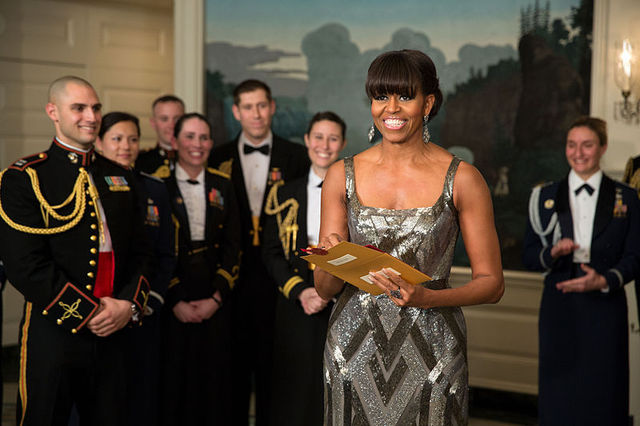 After she was named 2019's most admired woman, Michelle Obama is clearly in the running to be most admired in 2020, too. After sharing a photo of herself prom in the 1980s on Instagram, captioned “throwing it back to my 1982 prom night and this pink satin, polka-dotted dress,” she called for young voters in the U.S. to register to vote.

Throwing it back to my 1982 prom night and this pink satin, polka-dotted dress. If you're a student or teacher, join the #PromChallenge with @WhenWeAllVote and @MTV and tell us what your school is doing to register students to vote -- you could get a free prom for your school! Learn more at prom.mtv.com. You can also help me spread the word by posting your prom photo with #PromChallenge.

Obama is calling on high schools throughout the U.S. to participate in the #PromChallenge, where 20 high schools will win up to $5,000 to put toward their high school’s prom. This is partnered with MTV’s +1thevote campaign and When We All Vote. Participants in this challenge can be anyone who represents their high school, whether they are a student, teacher, or administrator, and to enter, participants are asked to explain how they will approach voter registration at their school and how they will change the culture around civic engagement.

This is the latest of Obama’s many projects, as she’s long used her platform to advocate for youth engagement and education. And now, she’s aiming to increase the number of young voters, which could be key to winning later this year in the 2020 elections. The young votes have, for decades, turned out at far lower rates than older votes. Experts have been explaining that this is due to voter suppression, disadvantages, and barriers to access, and yet, in 2018, this started changing: the youth vote increased dramatically. And with Obama continuing to encourage and educate others, it will only continue to do so.

Tags: Michelle Obama , 80s Prom , Prom Challenge , Youth Votes , Politics
Support Feminist Media!
During these troubling political times, independent feminist media is more vital than ever. If our bold, uncensored reporting on women’s issues is important to you, please consider making a donation of $5, $25, $50, or whatever you can afford, to protect and sustain BUST.com.
Thanks so much—we can’t spell BUST without U.