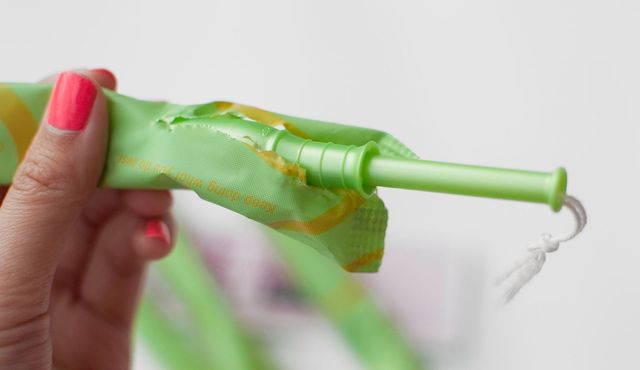 According to the law in many states, tampons and pads are a luxury. Not a necessity like you know, toilet paper, toothpaste, bandages, oh, and Viagra. Let it be known that what is and isn’t taxed differs from state to state, and the choices certain states make on what to tax and what not to is highly confusing. Something that has been up for constant debate over time, and even more so in recent years, is the question of whether menstrual products should be taxed. Obviously, we here at BUST (and probably any person who bleeds), think it’s absolutely absurd that many states still put a luxury tax on tampons. All people with periods want out of the tax removal on menstrual products is to make these necessities affordable and therefore accessible to all people. Apparently, some lawmakers don’t quite grasp that.

At a hearing in Tennessee earlier this month, Democratic lawmakers proposed a bill that would include tampons and other menstrual products in their yearly tax holiday. “But wait!” I like to think Republican Sen. Joey Hensley called from the far corner of the room, “What if the women buy ALL of the tampons?!?!” Okay, so maybe that isn’t exactly how it went down. But Sen. Hensley truly stated in opposition to the proposed bill, “I would think since it’s a sales tax holiday, there’s really no limit on the number of items anybody can purchase. I don’t know how you would limit the number of items someone could purchase.”

Yes that’s right, lawmakers in Tennessee are concerned that if tax is removed from menstrual products during the tax holiday, women will simply storm into every Walmart, CVS and grocery store in the state buying up every last box of tampons, quenching their insatiable thirst for period products. Folks on the internet are torn between being confused about why Sen. Hensley thinks people would go on some kind of rampage for the love of pads and tampons, or wondering if this gentlemen actually just doesn’t understand how periods work. One Twitter user tweeted:

A Tennessee (male) lawmaker asking if women would buy a crazy amount of feminine hygiene products if those products qualified for the state's annual tax free weekend reminds me of the time NASA thought a woman needed 100 tampons for a week in space. #tnleg

Needless to say, many reactions to this news story on Twitter were both highly hilarious, and highly educational:

The Guardian reports that Tennessee Republicans are insisting that tampons not be included in next summer’s 3 day state tax holiday, lest TN women go into a “frenzy” of tampon buying. Wonder how many tampons it takes to slake that lust for tampons.

There is nothing I love more than buying literally thousands of unnecessary tampons. https://t.co/sKhCsIPQNj

People who get their periods spend, on average, $6,360 over their reproductive years on tampons/pads/sanitary items. This begins, on average, at age 12. Those old, non-period having people want to make sure you can’t even get the tiniest break on TN’s 7% sales tax? Fuck that. https://t.co/sRsse07GXv

Personally, I would have tweeted something along the lines of: “If tax is removed from period products tax-free weekend, bitches will go buy up every last box of tampons. It’s me. I’m bitches.” But that’s besides the point. While the reactions to Sen. Hensley’s comments were all fun and games, the hearing in Tennessee reflects a deeper, more serious issue in the U.S. that needs to be addressed. Back in 2017, The Huffington Post did a study in which they found out just how much having a period costs throughout someone’s lifetime. When they added up the average cost and need for things like pads and tampons, pain meds, underwear and birth control with additives like heating pads and chocolate, the total resulted in nearly $20,000. That’s $20,000 that a lot of women and folks in need of period products don’t have. Because of the insane price of period products, and the added luxury tax in many states, many low-income people are unable to afford the necessities they need to get through their periods each month. Without the proper products, women are forced to stay home from school, work and other responsibilities.

In an ideal world, tampons and pads would be completely free. While free period products are now being stocked in many schools, homeless shelters and jails, there are still countless individuals that do not have access. The next best thing to free period products for all is to remove the tax on them, and a good way to start is by removing that tax once a year. This is what Sen. Sara Kyle tried to do when she proposed the idea to include tampons in the tax holiday exemptions. But obviously, Republican lawmakers in the state not only don’t understand the reason why this bill would be important for those who menstruate, but don’t even view it as a priority. In fact, throughout the United States, the discussion around removing the tax on menstrual products is not prioritized. This just goes to show that not only is a natural thing more than half the country goes through each month still considered a taboo, but that the basic rights and needs of half the country are simply not considered.

While the battle for the tampon tax to be eliminated in Tennessee still has a long way to go, other states have taken steps towards “menstrual equity,” setting an example for what the nation as a whole must do. So far, nine states have eliminated the tampon tax and five states have passed legislation that requires free pads and tampons to be provided at public schools. Still, 31 states including Tennessee still need to follow suit in order for folks with periods to get the necessities they deserve at a fair, affordable price.

Header Image courtesy of The Period Blog via Wiki Commons.

Sweet Justice: See How These Seventh Graders Protested For Their Right To Free Period Products

Tags: Period , Period Products , Menstrual Products , Pads , Tampons , Tampon Tax , Menstrual Equity
Support Feminist Media!
During these troubling political times, independent feminist media is more vital than ever. If our bold, uncensored reporting on women’s issues is important to you, please consider making a donation of $5, $25, $50, or whatever you can afford, to protect and sustain BUST.com.
Thanks so much—we can’t spell BUST without U.