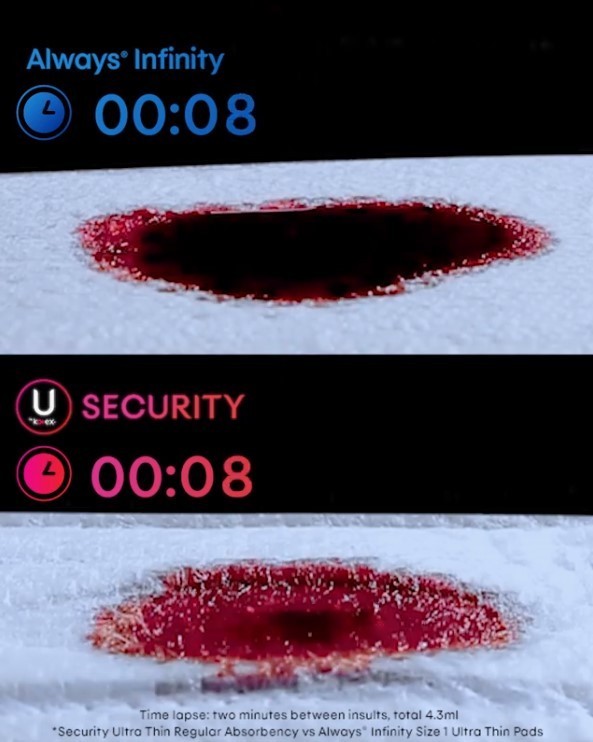 Thanks to a new ad campaign released this month by the Kimberly Clark Corp.’s feminine hygiene brand, Kotex, it appears as if the commercial industry is finally taking steps to destigmatize “that” time of the month.

“Blood is blood,” said Sarah Paulsen, creative and design director for North American feminine-care brands at Kimberly-Clark. “This is something that every woman has experienced, and there is nothing to hide.”

Count on U by Kotex® Security® Ultra-Thin Pads™ to keep up with you.

But, the idea that a woman’s period is “nothing to hide” is somewhat of a new one.

Since the beginning of feminine hygiene ads, the 1920s, period products were branded as “discreet” or represented as blue, not red.

Period shame is exists in many cultures outside of the U.S. Though banned in 2005, a Nepali practice called “chhaupadi” forces menstruating teens/adults outside of their homes into menstruating huts.Menstruating women are seen as “unclean” and for this “are banned from touching people and certain foods as well as entering temples, using communal water sources or kitchen utensils.” Countless people have died from this practice.

Though women are no longer banished because of their periods today, they are shamed. According to a 2018 poll commissioned by THINX, periods are still something society treats as taboo.

Polling 1,500 women and 500 men across the United States, the study revealed that there’s still a lot of shame surrounding this aspect of female health. According to this study 43 percent of women experience period-shaming. One-in-five state that they have experienced this kind of shaming due to the comments of a male friend. The study doesn’t stop there, though. It goes on to reveal that 12 percent of women have also received period-shaming due to the comments of a family member and one-in-ten said they have experienced this type of shame because of comments made by a classmate.

This study revealed that period shaming is even worse at work with 51 percent of the men polled stating that they believe period-talk at work is inappropriate.

“Period-shame is something a lot of women feel, starting with their very first cycle, which can occur as young as eight years old,” A THINX spokeswoman said. “Those feelings of embarrassment and self-hate are then reinforced by society, which tells women that their bodies should be clean and tidy, and if they aren’t, well that’s not something to be openly and honestly discussed. By anyone.”

This period-shaming doesn’t end with the initial comment, however. The THINX study showed that due to period-shaming 58 percent of women have felt embarrassment when on their period, 73 percent have hidden menstrual hygiene products up their sleeves or in their pockets before using them, and 29 percent have cancelled plans because of their period.

Period-shaming does have a negative effect on women, the study reveals. That’s why Kotex’s ad campaign that accurately depicts menstruation blood is not just a step, but a leap forward in destigmatizing periods.

Other companies in the past have tried to do what Kotex is doing now—depict menstrual blood as the color it is, red—like Libra, an Australian feminine care company, or Cora, a U.S. startup, but the ads were not well received.

In 2019, Libra released ads depicting realistic-looking blood on both women and period pads. Though the ad did not breach industry standards, it prompted hundreds of viewer complaints, bringing the ad to the attention of the country’s regulators.

In 2018, Cora’s ads—ads that used red liquid to represent period blood, like Kotex now—were initially removed from social media sites such as Facebook and Instagram. They were flagged as overly graphic removed. But, Cora Co-Founder Molly Hayward fought for her ads. Facebook and Instagram eventually restored them to their platforms.

“There is a greater appetite and readiness for honesty around this,” Hayward said, the Wall Street Journal reported.

Hopefully, Hayward is right and Kotex’s new ad campaign will be better received than its predecessors and make a positive impact on normalizing periods because “that” time of the month comes for all women and that’s not something to be ashamed about.

Tags: Kotex , Kimberly Clark Corp. , period , menstruation , health , female health , THINX , period-shaming , Happy Period , menstruation,
Support Feminist Media!
During these troubling political times, independent feminist media is more vital than ever. If our bold, uncensored reporting on women’s issues is important to you, please consider making a donation of $5, $25, $50, or whatever you can afford, to protect and sustain BUST.com.
Thanks so much—we can’t spell BUST without U.