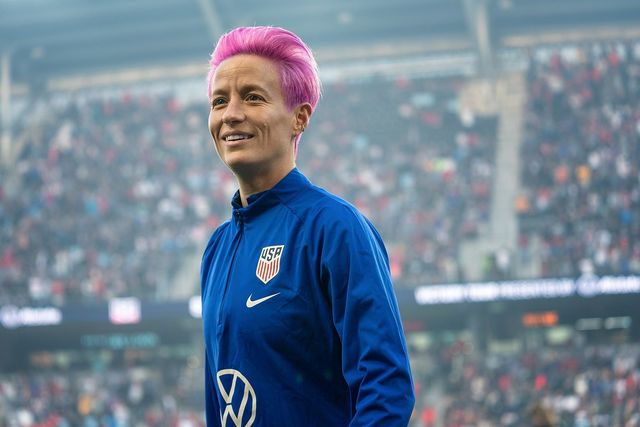 In a show of solidarity, the U.S. men’s soccer team has broken its silence on Wednesday in an extensive statement. The United States National Soccer Team Players Association (USNSTPA) is the union that represent the United States’ men’s national team. In their statement, the USNSTPA laid out plainly what they believe the game plan going forward should be.

“What we believe should happen is simple," they wrote. "Pay the women significantly more than our recently expired men’s deal. In our estimation, the women were due at least triple what our expired deal was worth in player compensation.”

The U.S. women’s soccer team has famously been calling out the disparity between their pay and that of their male counterparts. The USWNT has more World Cup wins than any other women’s national team in the world, yet despite their running list of achievements, the US Soccer Federation has not given them their proper due.

The USWNT filed a class-action gender discrimination lawsuit against the USSF last March (on International Women’s Day, no less) after spending several years demanding that they be paid equally. The USWNT has been victorious in the last two World Cups and have just earned their spot to compete in this year’s summer Olympics in Tokyo. The 28 members of the 2015 World Cup winning team will have their day in court on May 5 of this year.

The men’s national team’s player association was adamant in its stance that the United States Soccer Federation has been steadfast in their aims to spin the narrative and (quite literally) shortchange the women’s team. It is their hope that by airing the details of these behind-the-scenes moves, they will “create a better understanding and perhaps help bring about a resolution.”

According to the statement issued, the US Soccer Federation has an exclusive hold over which players can represent the U.S. and that the Federation has lorded that power over players consistently for years. The USNSTPA says that the Federation “benefitted from ticket sales, sponsorship, and merchandising while paying players as little as possible.” Both the men’s and women’s team have fallen victim to this and are not fairly compensated, especially considering the huge risk of injury the players run each time they step out onto the field for a game or practice.

The men’s team has issued a call to arms of fans, urging them to share their grievances as well. “Write to your Congressional representatives and tell them it is time to reform the Federation. Let the Federation know that you do not believe the false narrative they are circulating. Support the players, not the Federation,” they stated.

By mobilizing and sounding off in such an open way, the men’s team helping to cement the fact that an egregious wrong needs to be righted by the USSF. The U.S. Women’s Soccer Team has generated more than $33 million dollars for the USSF since 2011 yet have not been justly compensated for their contributions.