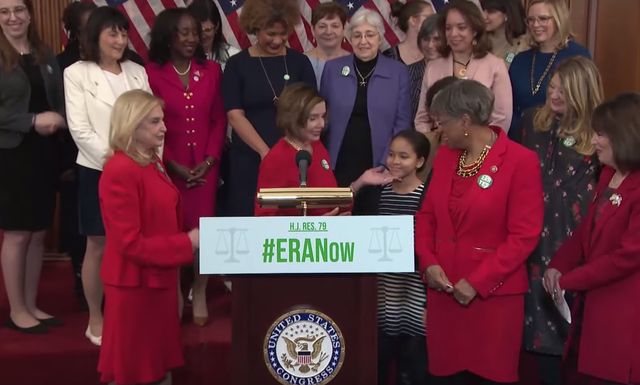 Things are stirring in the world of the Equal Rights Amendment once again. Last night, the House of Representatives voted to revive the ERA, removing the amendment’s 1982 ratification deadline. In a 232-183 vote, with five Republicans voting in support of the bill and zero Democrats opposing it, the amendment that is set to give womxn of the United States equal rights under the law may very well be alive again. Well, kind of.

The ERA is arguably one of the most complex pieces of legislation in United States history, which is part of the reason it has taken decades to actually ratify it. But the ERA is also one of the most important pieces of legislation in our nation’s history. Yesterday morning, Speaker of the House Nancy Pelosi stated, “It's not just about women; it's about America. The ERA will strengthen America, unleashing the full power of women in our economy and upholding the value of equality in our democracy." Rep. Rashida Tlaib added, “I want you all to know this is about women of color, women with disabilities, transgender women, immigrant women, all. These women are affected by issues of unequal pay, sexual violence, lack of access for healthcare, and poverty. So much of what we’re doing here in trying to promote women’s equality is about gender, racial, and economic justice.” If we’re looking at women’s rights from a constitutional standpoint, the U.S. is about as good as Gilead. Ratifying the amendment would mean everything from helping women get equal pay, to protecting our most basic human rights and bodily autonomy. For the average feminist, it’s a no brainer that the ERA should have been set into law years ago, and is more important than ever now. But, it has been faced with intense opposition from the Republican party even to today.

In the House yesterday, some Republican lawmakers stated that their qualms with the bill came from the fact that they view it as a sort of pro-abortion bill, and believe ratifying it would completely undo pro-life legislation in certain states. While the ERA would impact basic reproductive rights, it’s not entirely clear just how these rights would be impacted. What is clear is that womxn need to be represented at the nation’s highest level law, and can no longer be looked at as second class citizens. So, what exactly needs to happen to ensure that the ERA does not become DOA?

A major step was taken when the move to remove the deadline for ratification was passed last night. As one might remember from many years of listening to School House Rock, however, in order to become law, the bill must now move up to the Senate, where if passed, it would then go to the President. Here’s where the ERA might run into some problems. Currently, the Senate is Republican-led. Not to mention Mitch McConnell, the Senate majority leader, is an avid opponent of the amendment. Big surprise. McConnell will likely not call the bill to be voted on, even though it passed in the House.

But wait! What would happen if the Senate flips to a Democrat majority in 2020? This is looking like it might become a possibility as we grow closer and closer to election season. In that case, could the bill to extend the ratification deadline be called then and voted in favor of? Yes, it could and most likely would. However, (this is very quickly becoming a case of “What good luck! What bad luck!” so hold your horses), if and when the bill is passed in the Senate, supporters of the ERA would need a President who is willing to sign the bill. Even then, it would probably be challenged by ERA opponents and the Supreme Court would be asked to rule whether or not the action to remove the deadline in and of itself is legal.

The Supreme Court currently has a 5 to 4 conservative majority. Due to the complex history or the ERA, such as the fact that various states have rescinded their votes in favor of its ratification in the past, it is highly possible that the Supreme Court would rule the removal of the amendments deadline invalid. Even Ruth Bader Ginsberg, whom I would literally trust with my life, thinks that the entire 100-year process of ratifying the ERA will have to start over again if we want any real chance at getting the equal rights we deserve. The feminist justice stated, “There’s too much controversy about latecomers. Plus, a number of states have withdrawn their ratification. So if you count a latecomer on the plus side, how can you disregard states that said ‘we’ve changed our minds?’” Ruth, I love you so much, but the truth hurts so bad.

If Ruth is right (and let's be real, she kind of always is), the process starts all over again. The ERA will once again need to pass through both the House and Senate by ⅔. Then, the amendment will once again need to be ratified by ¾ of the states. An optimist might say this will be easy. That although it’s a setback to have to start from scratch, we live in a new era now, and the process of ratifying the amendment will be much easier this time around. A pessimist would say that we’re doomed, that Trump’s America is far too messed up and we may as well give up or get ready for another 100 years of disappointment. I’m by no means an expert, but I would like to say that I fall somewhere in the middle: when we start over again, passing in the house and the senate by ⅔ might not be the hard part. What will be difficult is getting 38 states to ratify the amendment all over again, especially because those 5 lame-os rescinded their votes the first time around.

However, this proves one thing: Now more than ever, it is increasingly important to get involved not only at the federal level, but at the state level as well. We only have the possibility of the ERA because some bad-ass feminists worked their butts off to see that their home states knew women weren’t going to sit idly by anymore. So, if and when we do have to start all over again, we can’t let the work they did go to waste. Call your representatives. Create feminist groups. Start rallies. And most importantly, vote, vote, vote.

In another three years or so, the ERA might just come full circle after a 100-year long fight. Even if we start over, we could be looking at a not-so-distant future in which the Equal Rights Amendment is part of the constitution, and womxn of the United States are equally protected and represented under the law. The ERA isn’t dead on arrival — she just needs a little resuscitation to get her blood pumping again.