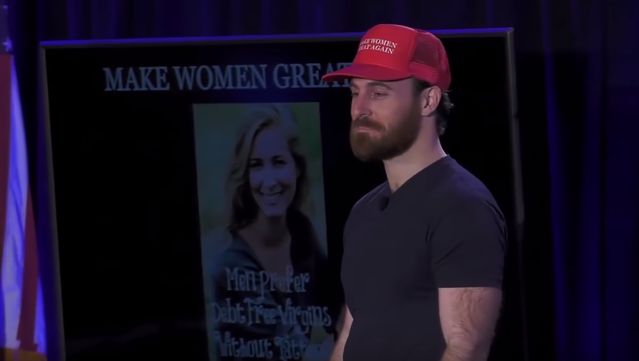 Ladies, did ya hear? The world’s ultimate event for women is coming up this spring, and it’s called the 22 Convention. We’re being facetious. The 22 Convention, an event with the intent to “make women great again,” led entirely by men sounds like maybe the worst thing we could possibly think of. So naturally, we’re here to spill all the details on this meninist monstrosity.

If you want to pay upwards of $2,000 to be told how to be a woman by a dude, then the 22 Convention is the place for you. Founded by Anthony “Dream” Johnson (who refers to himself as the president of the “manosphere"), the 3-day convention held in Orlando, Florida this coming May will mansplain the many facets of becoming an ideal woman to its attendees. If you’re nauseated already, you’re not alone. And this isn’t actually the first time Johnson has pulled a stunt like this one. He also happens to be the founder of “The Redman Ground,” “the world’s #1 podcast for men,” and 21 Studios, which held a convention last year titled the 21 Convention, the ultimate event for men and fathers. Additionally, he’s the type of person who tweets, “Feminist are the new KKK,” so you can see where this is going.

Feminists are the new KKK pic.twitter.com/3B1RBr2KyX

The website boasts that #22Con is the place to find out what went wrong. Convention-goers will learn all about how feminism is the enemy, the war on motherhood, the “epidemic” of overweight women in the U.S., how to boost your femininity by 500% and of course, how to have *unlimited* babies. The descriptions of these panels spew narratives that we here at BUST, and many other feminists, are frankly, quite tired of. From citing feminism as a phenomenon that “pushes women to be more like men,” to condemning both single mothers and women who wait longer to have children or can’t have/do not want children at all, this convention is the very definition of toxic masculinity.

22Con sounds like it should be some kind of SNL sketch, but by the looks of it, this event is totally legit. This makes seeing transphobic rhetoric like “This event is for natural born biological women only. Mothers, grandmothers, and aspiring mothers are all welcome to attend (being a mother is not required, but being a biologically born natural female is)” on the website all the more harrowing. Before we dive any deeper into this absolutely absurd event, it’s important to look at where the ideals of 21 Studios came from. Obviously, sexism, misogyny and the patriarchy as a whole are not new in the slightest. For centuries men have viewed women as objects, but in recent years, regressive ideas seem to be more commonplace. More specifically, since around 2016 if you pick up what we’re putting down.

The term “meninist” started to become popular around 2014, and is essentially a movement that believes men have been victimized by feminism and that their struggles need to be validated, rather than the other way around. Similarly, terms like “beta males” and “incel,” which have typically been associated with men who have animosity towards sex-positive women, or women as a whole, began to get attention around 2018. While the men of 22Con hide behind the guise of believing in “family values,” at their very core, they are inherently meninists and incels hiding behind this “make women great again” narrative. They believe that feminism has corrupted women and have become angry about the great strides womxn have made towards equality rather than viewing it as a positive.

It seems that the kind of men who support conventions like this one wholeheartedly believe that feminism and the rise to equality for all has taken something away from them. You can see this in action through the convention’s speakers list which, you guessed it, is 100% male. Alexander J.A. Cortes, the dude who taught women “how to be beautiful,” which in his eyes entails being thin, listening to men and shaving, heads the list along with far-right activists Stefan Molyneux and Mike Cernovich and 14 or so other gentlemen who focus on fitness, sex, money, romance, parenthood and more. Many of the speakers describe themselves as the “alpha” of their family and “patriarchs.” Yikes. What’s more, the convention is sponsored by two notoriously sexist groups, The Fraternity of Excellence and The Family Alpha, who champion “masculine excellence” and “keeping the masculinity in marriage.”

How to be a Beautiful Woman

After looking into this convention, I’m torn between wanting to crawl in a hole and never come out again and starting a riot, but the singular silver lining of it all is that 22Con has been met with some serious backlash from media outlets, activist groups and folks on social media. Some popular content creators on YouTube, such as Kurtis Conner, have even dedicated entire videos to condemning this mansplaining

Up next: A conference to teach Millennials to use technology. Guest speakers include someone’s grandma, who will teach you to use the Wi-Fis, and my dad, who will explain the complexities of the fucking mute switch on the iPhone. #22con #mansplain #ytho https://t.co/ijyeaylUNV

While the entire concept of 22Con might make the average feminist feel like they’re completely and utterly losing their marbles, above all it incites a general feeling of anger, disgust, and even fear. To know that harmful ideas like the ones promoted at 21Con and 22Con are alive and well in 2020 is shocking. Albeit absurd and kind of hilarious, 22Con is just another example of a movement that feels totally regressive rather than progressive, a phenomenon we have been seeing a lot of in the United States as of late. Even still, it is comforting to know that it seems as though more people are rallying against 22Con than behind it. It will be interesting to see just how many people actually show up, especially with that ticket price. In the meantime, catch me continuing to rage against the manosphere.

Relax, Women! This Man Created A "Safe Space" Just For You!

WTF Is "Meninism" And Who Are These Women Who Support It?