Out Of This World: Christina Koch Returns to Earth After Breaking Another Record 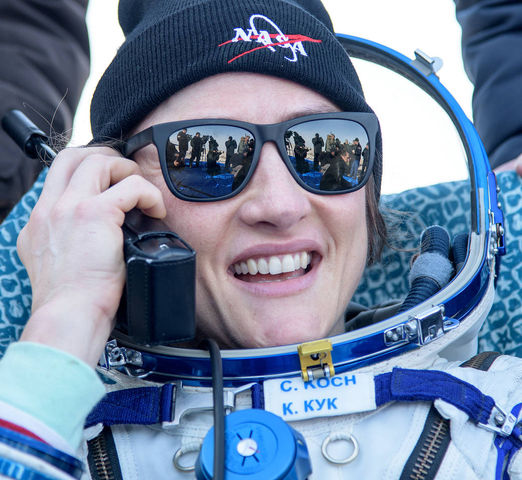 Taking achievement to new heights, astronaut Christina Koch has just made history for breaking the record for longest spaceflight by a woman after spending 328 days in space. The previous record by a woman was held by Peggy Whitson who spent 288 days in spaceflight. Koch, along with European Space Agency astronaut Luca Parmitano and Russian cosmonaut Alexander Skvortsov, returned early Thursday nearby Dzhezkazgan, Kazakhstan just after 4 AM. Koch’s accomplishments mark another milestone for women in the aerospace industry.

Back in October Koch took part in the historic all-female spacewalk, spending a combined 42 hours and 15 minutes outside of the International Space Station (ISS). Notably, the walk had been delayed by seven months due to a lack of suits designed for women. The setback served as yet another glaring example of just how much women are not accurately –or justly—considered in so many different areas. Nevertheless, the spacewalk was a success for Koch (then on her fourth walk) and fellow NASA astronaut Jessica Meir (on her first).

During her time aboard the ISS, Koch took part in over 200 scientific experiments that aided researchers in learning about the effects of outer space on human beings. For example, one branch of studies focuses on the effects of zero gravity on the human body for an extended period of time. According to NASA, lengthy missions may result in astronauts experiencing possible bone degradation. Prior to flight, the Vertebral Strength division records the musculoskeletal measurements of astronauts both prior to and after spaceflights to comply data on the any injuries endured that could help them in the future to prevent or minimize damage during upcoming missions.

Koch’s work with initiatives such as this are crucial in helping researchers to learn more about the human body and could potentially make a breakthrough in cancer treatments and creating human organs, research that is stilted here on Earth as of right now due to the impacts of gravity. Koch has been instrumental in moving the needle forward on enabling experts in groundbreaking leads of sustainability. Her work with plant biology has the potential to offer more fresh produce selections for astronauts partaking in spaceflights in the coming years. Koch and her team managed to grow Mizuna mustard greens within their station.

Koch was chosen in the 2013 class for Astronaut Group 21. Coincidentally, her future spacewalk partner, Jessica Meir, was also selected for this team. The 2013 class was represented well with an even split of the eight members, with four men and four women. Koch went on launch to the ISS on March 14, 2019 as a flight engineer.

In an interview while aboard the ISS in April 2019 with NASA Video, Koch said, “I know that seeing women do awesome work in positions in engineering and science and fulfilling all of their dreams, it truly inspired me and so it’s part of paying homage to those people that paved the way to where we are today as well as inspiring the future.”

A milestone as remarkable as this is no easy feat, and Koch understands and appreciate those who paved the way for her to be in such a position, like the previous record holder before her.

In an interview with CNN, Koch said, “Peggy [Whitson] in particular is one of my heroines and she’s been a mentor to me, so it’s a great reminder to me to try and make her proud and also to do mentorship when I get home to sort of pay that back.” Koch’s diligence in paying tribute to her role models while also being one to millions around the world is just another triumph worth celebrating.

In just under a year, Christina Koch has made history twice, proving that there’s truly no limit to what women are capable of. After all, as she told NASA, “I do think that examples matter, and so it’s important that people just see that it’s normal for people of all shapes, sizes, genders to be able to fulfill the dreams that they have.”

Tags: Christina Koch , astronaut , space , record , NASA
Support Feminist Media!
During these troubling political times, independent feminist media is more vital than ever. If our bold, uncensored reporting on women’s issues is important to you, please consider making a donation of $5, $25, $50, or whatever you can afford, to protect and sustain BUST.com.
Thanks so much—we can’t spell BUST without U.