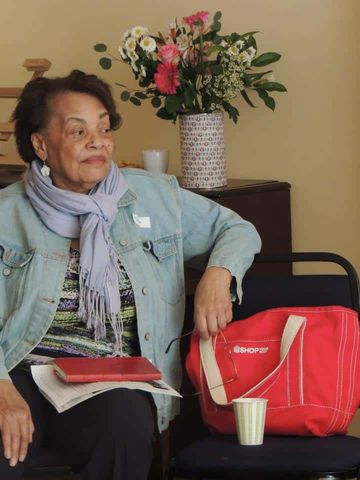 Long-time social activist and feminist Jean Stallings first volunteered with the civil rights movement in the 1960s through Johnnie Tillmon’s National Welfare Rights Organization (NWRO). Since 2000, she has volunteered with ATD* Fourth World, which led her to write a documentary fiction novel that won a Next Generation Indie Book Award in 2019. I sat down with Stallings to talk about her activism, rights for single mothers, and her experience meeting Dr. Martin Luther King Jr.

How did you start your journey inspiring others, such as myself, to become feminists and activists?

I started with the National Welfare Rights Organization, in a very simple way. I was introduced to them when I went to visit a community center. I had young children that I was struggling to raise single-handedly, with the help of supplements from the government. I heard these women talking [at/about the NRWO], and they said we’re here to fight for women’s rights, to help children by bettering living conditions. They invited me into a meeting with my kids with me. I just got overcome with emotion to hear all the women in hardship, in public housing, living with their parents, with maybe children, struggling. They were at this meeting to learn how to work together, and I was just fascinated. So I started going to their meetings at the community center in Nassau County.

I started to overcome my fear of public speaking. I was not sure if I could talk right, if I was giving information like I should. But I learned because those women helped by just making me feel comfortable. I put myself out there and learned that I wasn’t an outcast. Then they asked me to be a delegate to go to Chicago, because Dr. Martin Luther King and his team were there. This was campaigning. It was my first plane ride. You know, this was the 1960s, it wasn’t like now where women are vocal about their rights, Especially with the civil rights movement, with Dr. King and the NAACP, women were in the back of the men. Single mothers in particular were not heard.

So with the NRWO, we got very vocal. We just didn’t back down from the conversation. We were rabble rousing. So we asked Dr. King, “Do you know anything about single mothers?” and he was honest and he said no. So we had a conversation. We were just getting confident by talking with other women and together. We were persistent together. It was beautiful. Just being women together like that was phenomenal.

Then I learned to register voters in my own community. The beauty was to go back and talk with other women and politicians and to get action. I was asked to go back to my community to meet with a congressman. I explained that we wanted work, not welfare, and that we needed training and daycare to work. He opened the first Head Start program in our community, and I enrolled my children right away. It evolved from people learning what the struggles are, to giving each other confidence, to getting funding for the program.

That’s really nice that you went back and used what you learned.

Oh yeah, because if you don’t, it’s meaningless. It’s great talking to people with titles who are known throughout the world. But everything needs to be brought back to the people where you came from.

It was like talking to someone with an aura around him. It was all in his eyes. But did we hold our heads down? No! We said to him: “We want respect.”

You’ve faced many struggles in your own life. What do you think was the most difficult thing you had to cope with in terms of rights, in advocating or campaigning?

Well, I’ll tell you — having people disrespect you as a person and make you feel inferior.

That was a big obstacle for me. When you have to depend on food stamps, it’s looked down on. You feel ashamed to go to a store. During that time, it wasn’t a card; it was a booklet of coupons to tear out. That was a big thing, and my kids were ashamed, they wouldn’t even go to the store with me.

Take a chance on yourself: you have a role in society, and you have a right to ask and demand, and to speak out about injustice, especially when you’re raising children single-handedly. Also, women should just support each other. There’s nothing like a woman-to-woman talk.

Now you’re with ATD Fourth World. What do you love about ATD?

Total partnership where I feel so respected. I was fortunate to travel to many countries [with ATD], and participated at the United Nations for years working on human rights with the Social Development Committee.

That’s great. Your voice is really getting out there.

With ATD you inspired and supported a young mother who left school as a teen to go back years later and study for her GED. How did you encourage her?

At one point she was talking about her age. I told her that I was in my 30s when I got my GED with support from other people. Then in my 40s, I got my Bachelor’s degree. I told her, “You can do it.” The reason why she wanted her GED is because at parent-teacher meetings for her children, she was told to help her kids with homework. She responded by asking, “Why don’t you help the mothers who want an education so then we can help our kids?” Isn’t that phenomenal? Because of her, the teachers got together to start the GED program to teach mothers. She then got so many mothers rallied up to get their GED. She worked hard.

That’s so encouraging. Another great human rights campaigner with ATD Fourth World, and a friend of yours, was Moraene Roberts. She died recently, on January 12, which I was very sorry to hear. What can you tell me about her life and her legacy?

She’s worked for mother’s rights in London. She helped develop phenomenal work at Royal Holloway University of London where social work students would learn from her and others living in poverty how struggling parents and mothers should be treated. She was such a strong person and had a strong personality. She brought so much to the table by giving ideas of what to do from parents to the politicians, the people in charge. It was great hearing her talk.

What I remember most about her is that she was so articulate without talking over you. I was in awe.

Looking at the world today, what is your message for young people who want to work towards social change?

*ATD stands for All Together in Dignity. It is an anti-poverty human rights movement.

Tags: Jean Stallings , Feminist Activism , Activism , Single Mothers , MLK , Interview , Feminism
Support Feminist Media!
During these troubling political times, independent feminist media is more vital than ever. If our bold, uncensored reporting on women’s issues is important to you, please consider making a donation of $5, $25, $50, or whatever you can afford, to protect and sustain BUST.com.
Thanks so much—we can’t spell BUST without U.