A True #GirlDad: Father of Parkland Shooting Victim Escorted Out of SOTU Address For Protest 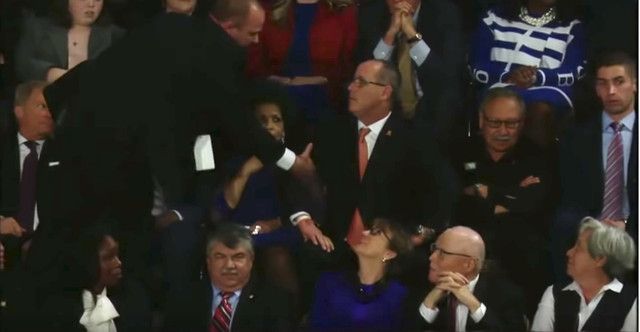 During the State of the Union address on February 4, Fred Guttenberg, whose 14-year-old daughter was killed in the Stoneman Douglas High School shooting in Parkland, Florida, shouted  “What about victims of gun violence like my daughter?” when President Trump vowed to “always protect your Second Amendment right to keep and bear arms." Guttenberg was then escorted out of the chamber and handcuffed.

Guttenberg attended the speech as Speaker of the House Nancy Pelosi’s guest. Guttenberg told HuffingtonPost that, “After listening to him blame ‘illegals’ for violence and then launch into the Second Amendment, I just let my emotions get the best of me.”

Wearing an orange tie, a color symbolic of the fight against gun violence, Guttenberg has been a harsh critic of the NRA, National Rifle Association, and has worked with numerous lawmakers to create gun control legislation. After the State of the Union, Nancy Pelosi is seen ripping up Trump’s speech behind him. Pelosi later called President Trump’s speech a “manifesto of mistruths.”

Despite many on Twitter supporting Guttenberg’s stand against Trump with the hashtag #ImWithFred trending, Guttenberg later apologized on twitter saying:

(2,2) That said, I should not have yelled out. I am thankful for the overwhelming support that I am receiving. However, I do owe my family and friends an apology. I have tried to conduct myself with dignity throughout this process and I will do better as I pursue gun safety.

Earlier this month, another hashtag, #girldad, was trending following a video of the recently departed Kobe Bryant talking about his excitement to be a “girl dad”, a father of only girls. This began a trend on Twitter talking about how proud they are of only having daughters.

Since America's Greatest President is trending, let's start the day with love....#GirlDad pic.twitter.com/FV50jBnjKN

I’ve dreamed of this moment my entire life. Kobe, you made it cool to be a #GirlDad pic.twitter.com/DlNX6NlAgX

Funnily enough, some of the same men tweeting #girldad are the same men saying, “Now that I have a daughter, I see women differently.” Only respecting women you have an emotional relationship with them is not respecting all women. This is also reminiscent of men commenting on teenage girls’ posts and tiktoks saying “I’m never having a daughter” because they are afraid to address their own sexist and misogynistic views on women.

Rapper T.I. even posted on Instagram hoping his daughters can forgive him following Bryant’s death saying, “I just Can't let another second go by without letting you know while we're still here in this life together.” This is after T.I. said that now that his daughter is a freshman in college, he goes with her to her gynecologist appointments to check her hymen and make sure she’s still a virgin. Really? Bryant’s death made you realize that doing this is very offensive and problematic? Not the millions of women explaining how bad it was?

men being girldad today and abusive misogynists tomorrow isn’t ironic, it’s in keeping with the legacy of only giving a fuck about women they see value in. and even when they see value in women it’s only to the extent they feel it reflects on them as men. so. yeah.

While this trend can seem a little toxic, the idea behind it is good. It is trying to address the long standing idea in cultures all over the world that having a son is better than having a daughter. Guttenberg is a perfect example of this trend. He’s the real #girldad. At a town hall about guns and schools shooting in 2018, Guttenberg said, “Every time one of these incidents happens, the conversation afterwards is always way too polite, way too comfortable and way too temporary. I will always be respectful. I have no need to be polite, though. I don’t want to make people comfortable when we talk about it, and I’m not going away. This will not be temporary.” Guttenberg is refusing to sit down; he will always stand up for his daughter.

The Parkland School Shooter Had A History Of Abusing Women, Like Most Mass Shooters Do