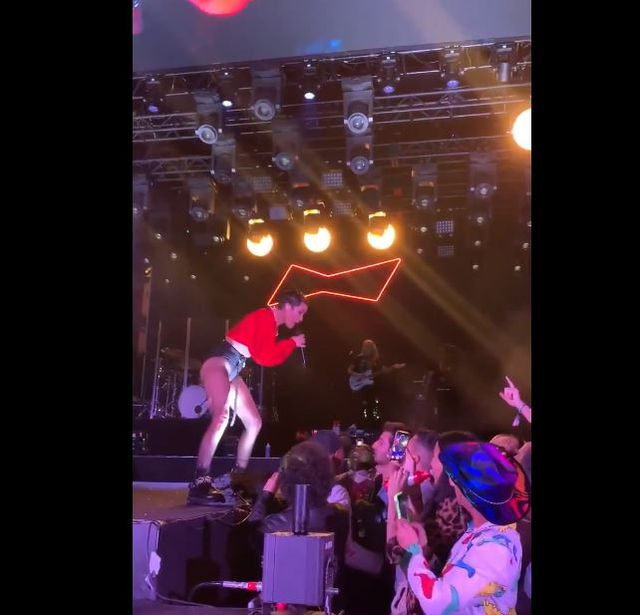 It’s a special kind of violence of having your ex’s name shouted at you in public.

A video of Halsey cussing out a fan went viral Sunday afternoon. The 25-year-old “Bad At Love” singer was performing Saturday evening at a pre-Super Bowl concert in Miami. In a video shared on Twitter, Halsey is in the middle of speaking, when she suddenly snaps and charges in the direction of her antagonizer saying “You say G-Eazy one more fucking time I’ll kick you out of this party. Test me.”

She leans in and demands the asshole be identified. She directly addresses him and says “I’ll kick your ass out the club. You don’t disrespect me like that at my own show.”

halsey went off and didn’t give a fuck pic.twitter.com/sBSRoC7OIv

In the second video, Halsey leads the crowd in a “Fuck that guy” chant.

#Halsey is not having it! Someone is yelling G-easy in the crowd! @tmz #miami #SuperBowl pic.twitter.com/wYsefNwBc3

For those out the loop, Halsey dated west coast rapper G-Eazy from 2017-2018. The two were on and off again for the duration of the year, until it finally ended. Halsey was then linked to another white rapper, MGK which was revealed as punchline in rap beef by yet another, older white rapper, Eminem. Halsey responded to being used as a pawn in the rap beef between G-Eazy and MGK as “absolutely pathetic.”

Despite being justified in her response, headlines have described Halsey’s reaction as unhinged. Even Twitter has deemed her as bitter, because on Monday, a video of G-Eazy rubbing and kissing Megan Thee Stallion posted on G-Eazy’s Instagram began to circulate.

The clip is oddly reminiscent of another viral moment, featuring Kehlani.

Back in 2017, footage captured the moment someone yelled “Kyrie” between songs at a Kehlani show.

It took literal seconds for the Oakland songbird to remind everyone why her debut album was titled, “SweetSexySavage.” She asked, “Who said that? Turn the lights up. Who said? Get the fuck out this concert, bitch.” And proceeded to have the disruptor removed by security.

If you don’t recall, Kehlani almost had a tragic end before her career really started in 2016. In short, Kehlani had dated basketball player Kyrie Irving. At some point they had broken up, but it wasn’t public knowledge. So you can imagine fans’ surprise when, rapper/singer PartyNextDoor, posted a photo of Kehlani’s easily identifiable tattooed hand in bed with him on Instagram captioned, “I still have the baddest r&b chick in bed.” It was apparent that Kehlani wasn’t awake during his impromptu photoshoot. This sent fans and haters into a frenzy, leading everyone to believe that Kehlani had cheated on Irving. After trending on Twitter and likely mixed with a slew of other personal problems, Kehlani attempted suicide. This then resulted in Chris Brown—of all fucking people—coming to Irving’s defense, deeming the suicide attempt as a ploy for sympathy.

It took awhile for Irving to come forward and admit that the two were indeed broken up by time Kehlani and PND got together, but by then the damage was already done. The Kehlani/Kyrie/PND triangle was a clusterfuck of epic proportions.

Needless to say, yelling “Kyrie” in the middle of a Kehlani concert was anything short of harmless. Kehlani defended kicking the fan out of the show in a since deleted Instagram post:

“after a year of being tormented, harassed, people sending me death threats/showing up to festivals in jerseys throwing shit at me and chanting names, bullying my family in school, at the grocery store, walking down the street, shit that I never even SPOKE on because I dealt with my problems like an adult ON MY OWN for once... I finally stood up for myself. After a year of depression and therapy, moving away to a new city because of it, i FINALLY STOOD UP FOR MYSELF. I’ve held concerts where when they screamed a name at me I ran off, had a panic attack and cried. I’m finally confident, fearless and unashamed. It felt good as hell to do what I did, so bring on whatever you want because I’m proud of myself, my team is proud of me, my mom is proud of me. I wish you peace (prayer hand emoji) oh… and you couldnt last a day in my shoes.”

While most of her fans praised her, Kehlani was still bashed by many men online, as many still believed that she had wronged their beloved basketball star. Thankfully that is all behind her and she’s currently a mom to the cutest, chunkiest baby Instagram has to offer.

These types of occurrences beg many questions. Why? Why pay to troll someone who didn’t harm you? But above all else, why do these men feel the need to knock these successful women down a peg, with total disregard to consequences? It’s one thing to be hateful from the safe distance of being online, but it is really bold and alarming to behave that way in person and in public. Again, it’s a special kind of underhanded violence. In both instances the singer (young women) are taunted by men in attendance in the singer’s safe place (the stage) in public. Not only is it distracting and disruptive, it’s intended to humiliate the receiver. It’s a violation of boundaries and a reminder of ex in space where the ex isn’t invited. In Halsey’s case it’s triggering as she recently alleged that G-Eazy was abusive in response to telling off the fan. In Kehlani’s case, though she maintains that she and Kyrie Irving are still really close friends, the initial ordeal resulted in her attempting to take her own life.

It’s imperative that these women be in safe spaces. Though it’s empowering to see women defend themselves when they have been violated, it still shouldn’t happen.