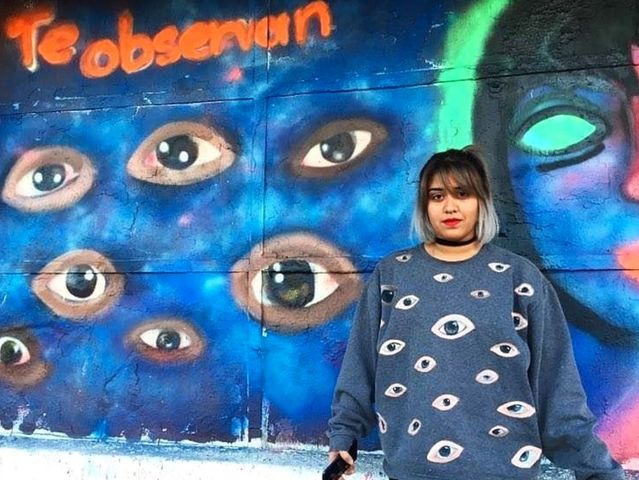 Last month, two feminist activists were murdered in Mexico. The second was just a little over two weeks ago, when the body of activist and artist Isabel Cabanillas de la Torre, was discovered in the border city of Jaurez, Mexico. Now, a pink cross stands where her body was found

A member of the feminist collective Daughters of Maquila Woker Mothers, Cabanillas's murder sparked outrage within the feminist community in Juarez. Upon the news of her death, friends, family and dozens of activists gathered asking that justice be served for her murder. When there seemed to be more police at the protest than at the actual scene of the crime, however, questions began to be raised. In fact, Cabanillas’s death sparked many questions amongst feminists in Mexico, and has begun an important discussion about a much broader, deeper rooted issue in the country. On average, 10 women and girls are murdered every day in Mexico. However, only about 10% of these murders are ever solved. After the events of Cabanillas’s murder, women’s rights activists in Mexico are making one simple and poignant statemet: That not one more be killed.

Following Cabanillas’s death, the United Nations Women’s Organization and the Inter-American Commission for Human Rights (IACHR) called for a quick and thorough investigation into her case by the Mexican authorities. The two organizations noted that action has to be taken to protect the rights of not only women’s rights activists, who are increasingly at risk due to the work that they do, but women in the country as a whole. The IACHR began tweeting out #JusticeParaIsabel in a call for action, and it’s looking like that action is starting to be taken.

In response to the 26-year-old artist’s death, Yarida Cortes of Red Mesa de Mujeres (Women’s Roundtable Network) stated, “She represents us because she is someone who raised her voice for justice, for the prevention of violence against women...Her murder has refocused attention on the fact that women are constantly being murdered in this community.” And that is exactly what feminists in Mexico are discussing. Her death sent shockwaves through the country, and additional protests since the first in Juarez have been held throughout the nation seeking justice for her death. Last weekend, hundreds of women gathered in Mexico City to protest the recent deaths of feminist activists in Mexico and femicide as a whole. They assembled by a monument dedicated to murdered women, and processed to take to the streets in a march, later pouring red paint onto police officers in a statement about the lack of police activity that surrounds that growing cases of femicide. This wasn’t the first and only demonstration that has taken place in protest of this issue last month in the capital city, however. In early January, a demonstration was led in which hundreds of pairs of red shoes were placed in front of the city’s capital to represent all the different women who have died as a result of feminide. Elina Chauvet, an artist who helped organize the demonstration stated, “The red is for the blood that has been spilled, but it is also a work that speaks of love.”

While Mexico has recently acknowledged that gender-based violence is, in fact, a huge issue, little has been done to make a difference. Often times, charges of femicide will be changed to homicide--which Amnesty International notes is a phenomenon that often takes place in order to make the statistics on gender violence seem less drastic. Although action is not immediately being taken by the Mexican government, feminists, like the women who organized the demonstration in Mexico City earlier this month, are speaking up to demand change.

Enter revolución diamantina, or, the Glitter Revolution, a group of feminists calling for an end to femicide in Mexico. Following the Violet Spring of 2016, The Glitter Revolution, which began after a young girl was raped by police officers, demands that broader action be taken to combat gender based violence in the nation and corruption at the hands of the police. In what some are calling a feminist earthquake, thousands of women have joined the fight for justice from the hundreds of women who gathered on The Day of The Dead carrying purple crosses with the names of missing a murdered women, to the collectives being formed like the one Cabanillas was part of, to the demonstrations that have been organized in her honor.

It’s beginning to seem like although the tragic news of deaths like Cabanillas’s have been more frequent in the new year, there has also been news each day that a feminist fire is spreading. An article published in The New York Times last week promised hope that the feminist revolution and call to end violence against women is advancing throughout Latin America. We have seen it with Lastesis in Valparaíso in Chile, who served as inspiration for the Harvey Weinstein trial protests in NYC and have been emmulated in the face of similar issues in countless other countries. These protests prove that womxn are stronger together, and that when we come together in the name of shared issues and struggles, change can be made. Hopefully soon, Cabanillas and countless other missing and murdered women, will finally get the justice feminists in Latin America and around the world are demanding.