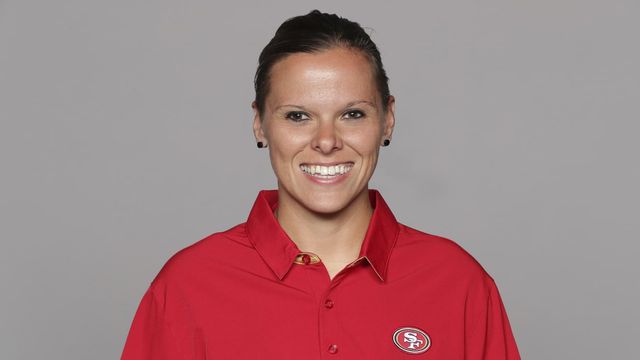 This Sunday, Katie Sowers will be both the first woman and the first openly gay person to coach in the Super Bowl — although, as she says, she hopes she definitely won't be the last.

Sowers has had a love for sports since a young age. She played sports with her twin sister, Liz, growing up in Hesston, Kansas, and as she told People, “any journal entry in school, it was always about football.” Later, she attended Goshen College in Indiana, a private school with a religious affiliation to the Mennonite Church. At Goshen, she recalled, she faced discrimination for her sexuality when she was turned down for a volunteer, unpaid coaching position. "My coach called me in and said they have a lot of parents that have been worried about their daughter being around someone who is gay," she said in an NBC Sports video. "It was something that I grieved about for awhile, but I decided I had to move on." Then, Sowers looked elsewhere, which led her to football.

“Throw me to the wolves and I will return leading the pack” . And I couldn’t ask for a better pack to roll with ... FALL FOWARD . . . . #49Ers #niners #faithful #ninerfaithful #ninergang #nfl #california #sf #bayarea #saints #neworleans #bethechange #teambeforeself #sfvsno Photo credit - @49ersofficialphotog

Sowers joined the 49ers as an Offensive Assistant Coach in 2017 through the Bill Walsh Minority Fellowship. She used to play football herself, and was a member of the United States Women’s National Football and the Women’s Football Alliance (WFA) until she injured herself and was no longer able to play. She then went to the University of Central Missouri where she earned her Master’s degree in Kinesiology, with an emphasis in pedagogy, and developed an interest in coaching.

“I feel like a broken record, but what I want to continue to say is that even though I’m the first, the most important thing is I’m not the last and we continue to grow it,” she said, as per AP News.

The 54th Super Bowl is this Sunday, February 2, at 6 PM EST. The 49ers will play the Kansas City Chiefs.