This Feminist Bakery is Sending Impeachment Cakes to the GOP 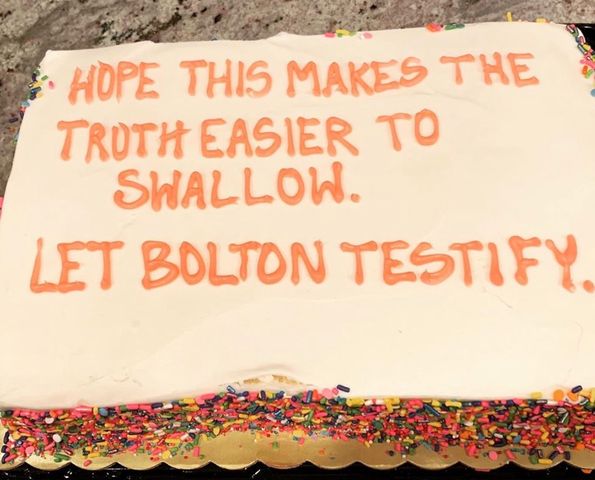 Well, let them eat cake. This past Monday, a GoFundMe was set up by Colin Bishopp in the hopes to raise enough money to send all 53 Republican senators a cake, urging them to let Trump’s former national security advisor, John Bolton, speak at the upcoming impeachment trial. Bishopp stated in the description of the fundraiser, “Republicans in the US Senate refuse to allow witnesses in President Trump's impeachment trial, so let's deliver them John Bolton's testimony on a cake. Maybe that will make the truth easier for them to swallow.”

Now, it looks like the Republican senators are going to have their cake and eat it too. The fundraiser has raised a whopping $7,000, and the sheet cakes are all set and ready to go. Made by the Brooklyn, NY-based feminist bakery, Butter & Scotch, the delicious delicacies are set to be delivered to the Senate chambers tomorrow.

With the impeachment, it is crucial that witnesses are not blocked from getting the chance to testify, especially witnesses like Bolton. While Democrats have urged Republican’s to call for more witnesses, a little extra push can’t hurt. Especially if that extra push is coated in frosting and sprinkles. Along with the statement “Let Bolton Testify,” the sheet cakes will sport various different phrases like “Don’t Dessert Democracy,” “You’re in the Room Where It Happens,” “This Trial Is Half-Baked Without Witnesses,” and “This Is History in the Baking.”

Unfortunately, senator Ted Cruz has already reportedly turned his cake away. Uh, lame. But we’re still excited to see how the rest of the cakes are received by the GOP. In times like these, having our voices heard is more important than ever. But sometimes, it can feel a little bit like screaming into the void. Thanks to people like Colin Bishopp and Butter & Scotch, however, action can be taken. And that action can be spongey and delicious, too.