Trump Attended the March for Life Rally. What Does This Mean for the Pro-Choice Movement? 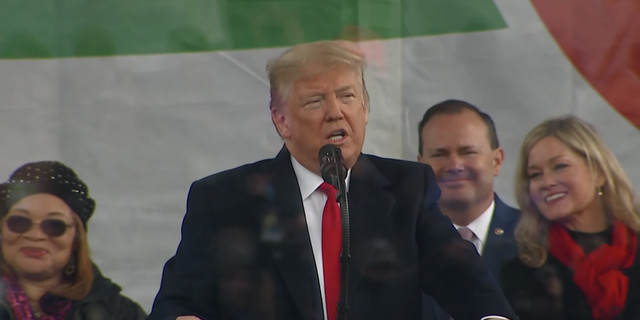 March for Life, an annual assemly of pro-life, anti-abortion advocates to protest the practice of abortion and the legality of Roe v. Wade, was founded January 22, 1974. Nellie Gray, a pro-life activist known for her philosophy “no exception, no compromise”, founded the event a year after the historic Roe v. Wade decision. The march is held in Washington D.C. and is organized by the March for Life Education and Defense Fund.

The first March for Life in 1974, was attended by an estimated 20,000 protestors, according to the March for Life website. Over the years, attendance has remained steady in the tens of thousands. Many high schoolers and college students have attended the march, usually bused in with church or youth groups. A Washington Post article in 2010 estimated that about half of the members of the protest were under the age of 30.

“We’re here for a very important reason: to defend the right of every child born and unborn, to fulfill their God-given potential. Unborn children have never had a stronger defender in the White House. And as the Bible tells us, each person is wonderfully made.”

In an interview with NBC News in 1999, Trump declared to be “pro-choice in every respect.”

When campaigning for president, Trump shifted his opinion from pro-choice to pro-life after registering as a Republican. As president, Trump has approved and supported many pro-life laws and has spread many falsehoods about abortion, like his quote during a rally, “They take care of the baby. They wrap the baby beautifully. Then the doctor and mother determine whether or not they will execute the baby.”

Attendees of the march, and Trump himself, have now declared Trump the “most pro-life president ever.” This is his way of gaining a bigger political base for the 2020 presidential election and to distract from his impeachment trial. This type of fanbase, white evangelical Christian voters, played an important role in his 2016 election win and Trump is hoping that they will help him with his second term.

“We are preserving faith-based adoption and to uphold our founding documents. We have confirmed 187 federal judges who apply the constitution as written, including two phenomenal supreme court justices: Neil Gorsuch and Brett Kavanaugh.” Trump said about his pro-life plans for the future.

Kellyanne Conway, who serves as counselor to the President, and Alex Azar, Secretary of Health and Human Services also attended the march. Azar was in the news recently after he called the Health and Human Services the “Department of Life,” which is especially ironic coming from the agency that played an integral part in putting children in cages at the border. That's definitely not pro-life.

Presidents, from the Republican party, in the past have interacted with the March for Life movement. In 1987, Reagan called in to the march, saying that he would work with them to “end this national tragedy.” Bush praised protesters in 2003 for their “devotion to such a noble cause.''

There have been other significant politicians that have attended the march. Mike Pence attended the rally in 2010 and 2011 as a Congressman and later attended in 2017 and 2019 as Vice President. Pence was the first Vice President to attend and, at the time, was the highest ranking official to attend the rally. Trump addressed the crowd at the 2018 and 2019 rally via satellite video feed. And this year, he addressed in person.

Trump closed his speech with, “They are coming after me because I am fighting for you and we are fighting for those that have no voice, and we will win because we know how to win. Together we are the voice for the voiceless.”

This is a very different way to address pro-choice and pro-life issues than presidents have used in the past. Presidents who opposed abortion never officially attended the march. They kept a safe distance, never wanting to be associated with the movement directly. By physically attending the rally, Trump is drastically changing the way pro-life and pro-choice issues are addressed. As mentioned before, Trump is attending this event to ensure the majority of his fanbase, white evangelical Christians, vote for him and support him during his impeachment. The Susan B. Anthony List recently announced that they will be donating 52 million dollars to reelect President Trump and other pro-life senators.

This attack on personal freedom and bodily autonomy is very dangerous and unsettling news for women everywhere. As we all known, getting rid of legal abortions will not stop abortions, it will just stop safe abortions.